The Adams County is a county in the US -amerikanischen State Illinois . In 2010 , the county had 67,103 residents and a population density of 30.2 people per square kilometer. The county seat is Quincy .

The county is located in the far west of Illinois on the east bank of the Mississippi River , which forms the border with the neighboring state of Missouri . It has an area of ​​2,219 square kilometers, of which 38 square kilometers are water. The following neighboring counties border Adams County: 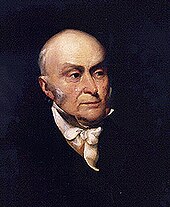 Adams County was founded on January 13, 1825 on former parts of Pike County.

The first county court meeting was held on July 4th of that year.

Adams County is divided into 23 townships :