The Greene County is a county in the US -amerikanischen State Illinois . In 2010 , the county had 13,886 residents and a population density of 9.9 people per square kilometer. The county seat is Carrollton .

The county is located in central southwest Illinois and is bounded to the west by the Illinois River . It has an area of ​​1415 square kilometers, of which eight square kilometers are water. The following neighboring counties border Greene County: 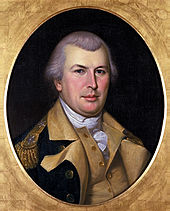 The country used to be the home of the warring Kickapoo and Pottawatamie Indians. It was later captured by the French first. As a result, war broke out between the French and British, who won the Battle of Quebec .

Greene County was formed on January 20, 1821 from parts of Madison County. It was named after Nathanael Greene (1742–1786), a general in the Continental Army in the American War of Independence . At that time the areas of the later Jersey, Macoupin, Morgan and Scott Counties were still part of Greene County and Edwardsville was the only city.

Greene County is divided into 13 townships :