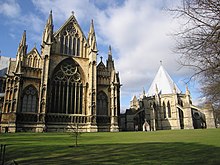 A chapter house is an assembly building for clergy and especially for collegiate or cathedral chapters , ie communities of clergy, which is attached to an episcopal, monastery or collegiate church. In England they were mostly attached to these churches; in continental Europe they were mostly a bit out of the way. The first chapter house was probably built next to Worcester Cathedral in 1110 .

After the church and the cloister , the chapter house was one of the most important and representative rooms of an abbey , a minster or a cathedral , similar to the chapter rooms in the German and French-speaking areas . In this additional building, all canons or monastery members had to sit on the walls, strictly divided according to age, the central room was kept free. For example, the chapter house of Worcester Cathedral had several seats, each covered with its own canopy . The name "Chapter" house was derived from the fact that here the Abbot or Prior , or contracted by the friar , a chapter ( capitulum = "section") of the rules of the congregation recited, after which the monks lived. Organizational matters were also discussed here, work assignments were given and sins were publicly confessed.

The founders of the order , important abbots or noble patrons and donors found their final resting place in the chapter house (even afterwards). For this purpose, floor plates were inserted or sarcophagi were set up.

Architecturally significant chapter houses were built mainly in the Anglo-Saxon region; They were mostly built on the northeast side of the church and were accessible from the north arm of the transept and / or the cloister . In contrast to the continental “chapter rooms”, the tradition of round or polygonal buildings (sometimes with a central column) prevailed in the English monasteries .

In central and southern Germany, the Kapitelhaus was mostly built as an independent nave , a little apart or attached to the abbey, the minster or the monastery . The example of the chapter houses in Schwäbisch Gmünd and Bamberg Cathedral shows the separate building. In Schwäbisch Gmünd, the house housed the chapter of the Gmünder Kollegiatstiftes from 1765 to 1803 and the new Bamberg house was built at the end of the 17th century and served, among other things, as a representative house. The high demands of the Benedictine University of Salzburg meant that an independent Kapitelgasse with three houses in the city center was built.

No chapter houses were built in southern and northern Europe; here it stayed with the traditional chapter rooms.