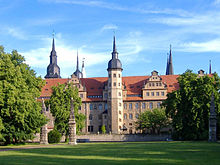 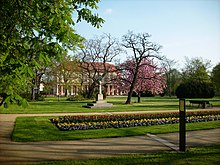 The Merseburg Castle is a castle in the style of the Renaissance in the city of Merseburg in Saxony-Anhalt . It was the royal palace , bishopric and ducal residence.

Emperor Otto I founded the diocese of Merseburg in 968 . Bishop Heinrich von Warin had the first castle built between 1245 and 1265. Under Bishop Thilo von Trotha , the palace was rebuilt as a three-wing complex around 1470 to 1500, with the Merseburg Cathedral forming a fourth wing.

When Leipzig was divided in 1485, Merseburg was added to the Albertine Duchy of Saxony . After the death of the last Catholic bishop in 1561, the Reformation finally took hold in Merseburg . The Merseburg Monastery was secularized and came into the possession of the Electors of Saxony . Until the beginning of the 18th century, however, it retained its own monastery government to administer the country on behalf of the prince. From 1656 to 1738 Merseburg was the seat of the Dukes of Saxe-Merseburg , a branch of the Albertine family . Delitzsch Castle served as the widow's residence for the duchesses .

Extensive renovations followed in 1604 and 1605 under Melchior Brenner on behalf of Duke Johann Georg I of Saxony . The Neptune Fountain in the courtyard also dates from this time. The palace garden, laid out in 1661, is now part of the Saxony-Anhalt Garden Dreams Network .

The castle was renovated in the 19th century and served as the seat of the Prussian district government from 1815 . It is currently the seat of the district administration of the Saalekreis district .

The east wing, which was destroyed in the Second World War, was rebuilt true to the original by 1971.

Merseburg Castle is owned by the Saalekreis district. Today the district administration has its seat in the historical complex.

The palace can be visited in guided tours, the grounds of the palace are freely accessible at all times.

In addition to the Johann-Joachim Quantz district music school in the Saale district, the buildings are also used by the Museum of Cultural History, founded in 1906. The museum's permanent exhibitions include “Glass beadwork from the 19th and 20th centuries” and “Historic igniters and lighters”.

The cultural history museum , an institution of the Saalekreis district, presents the history and development of the city of Merseburg from prehistory to the present on 3 floors (1800 square meters) . The focus is on the representation of the baroque residence of the dukes of Saxony-Magdeburg . In addition to this core theme, there are permanent exhibitions on glass bead work and a collection of ancient and bizarre igniters and lighters in other rooms .

In April 2013, parts of the palace complex were used as a backdrop for George Clooney's film Monuments Men - Unusual Heroes .

Ewald Adam Gustav Paul Constantin von Ungern-Sternberg had a copy of the Merseburg Castle, the Lindenhof , built near Haapsalu in Estonia from 1893 . This castle was never completed, the ruins have been preserved.

Castles and palaces in the Saale valley