God's judgment is a redirect to this article. For the concept of the last judgment of God, see Last Judgment 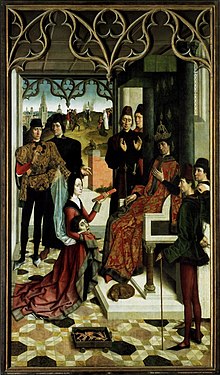 Dierick Bouts the Elder , The Trial by Fire

An ordeal , ordeal (Latin ordalium ) or ordeal is supposedly brought about by a higher natural sign decision in a dispute. The underlying idea is that a god intervenes in the process of finding justice in order to guarantee the victory of justice.

God's judgment is the German translation of the terms iudicium dei or iudicium divinum, which are used in Middle Latin . The term was adopted into the vernacular under the influence of the word ordel, which is probably derived from Old High German and through the inclusion of terms such as ordāl ( Old English ) or godis ordil ( Middle Low German ).

The term ordal comes etymologically - as far as the word can be traced back - from 'or - deal' (old high German ordel) and means something like 'original part' or 'original jump'.

The word ordal is generally used synonymously for judgment of God. However, legal historians point out that the term 'ordal' is basically always used correctly when people have confidence in the law , regardless of the form in which it is found in their respective social context, and this can also be done without any Idea of ​​God happen.

The history of God's judgments goes back a long way to the early stages of human civilization. The first written descriptions of divine judgments or ordals come from Mesopotamia :

There were divine judgments in ancient China, Japan, India and Egypt; they were a little less common in Greek and Roman cultures.

The judgments of God gained greater importance in the early Middle Ages. Judgments of God were not very widespread among the Germanic tribes that invaded Roman territory from the 4th and 5th centuries. With the Franks alone , the test with hot water seems to have been widespread since the 6th century at the latest. With the strengthening of the Franks in the 7th and 8th centuries, neighboring peoples such as the Anglo-Saxons, the Visigoths and the Lombards also took over the use of divine judgments in the form of hot water tests. Numerous other forms of divine judgment were introduced under Charlemagne : the ordeal by fire , in which the delinquent had to carry a red-hot iron several steps. If the wound became infected after a few days instead of healing, this was considered evidence of guilt. During the cold water test, the accused was thrown into previously blessed water. The latter test was based on the assumption that the water sanctified by Christ's baptism in the Jordan would repel the guilty and make him swim. At that time, God was thought of as “legalized”: He protected the law because he himself was the law, as the Sachsenspiegel of 1225 explains. These actions should challenge the evil with God's help and thereby make it evident.

God's judgments served as a last resort to ascertain the truth. The current procedure provided for the naming of witnesses in advance who testified for or against the accused. If no suitable witnesses could be found, the next step was to rely on oaths - a group of one or two dozen people who supported the plaintiff or defendant with their oath. Only when no clear judgment could be made on the basis of these measures, one resorted to divine judgments. In the Franconian Empire, these were usually accompanied by priests. Be it that it was about bandaging and later assessment of the wounds after the hot water test; be it that it was about the consecration of the water during the cold water test.

Judgments of God were already controversial in Carolingian times. Archbishop Agobard of Lyon rejected divine judgments because no precedents can be found in the Bible for this custom. He also criticized the fact that it was not human beings to force a divine miracle within the framework of a divine judgment. In addition to religious concerns, the Archbishop of Lyon also put forward logical reasons: If judgments from God really work, why should they be used as the last and not the first means of ascertaining the truth? In addition, God's actions are inconsistent with different forms of God's judgments. While the hands of the innocent would be protected in the test with the red-hot iron, in the cold water test the guilty would be protected from drowning.

On the other hand, the church also supported the Carolingian rulers in carrying out divine judgments , including through Archbishop Hinkmar von Reims .

While duels, fire tests and water tests were primarily common in paganism , the church created milder variants such as the cross ordal (both parties stood with their arms raised in front of a cross during mass; whose arms gave way first had lost its fall), host or the oath of cleansing spoken about relics was introduced.

In 1215, the participation of Christian clergy in such divine judgments by the provisions of the IV Lateran Council under Innocent III. prohibited. This gradually contributed to the disappearance of the divine judgments from legal life, especially since the secular side also increasingly banned divine judgments. For example, the German Emperor Friedrich II rejected the execution of divine judgments as incorrect in his Melfi constitutions .

In the 12th and 13th centuries, divine judgments disappeared from official legal life in Europe and were replaced by secular legislation and justice.

However, examples of the application of divine judgments continued. So was z. B. occasionally in connection with the persecution of heretics, the trial by fire is used. In the course of the witch hunt in the early modern period , some divine judgments experienced a renewed upswing and reappeared as so-called witch trials . First and foremost, the water sample should be mentioned here; but the fire test was sometimes still used.

In addition, there are examples up to the 20th century that the idea that God intervenes in the context of reaching a judgment has retained a certain fascination. T. also influences the actual judicial practice.

The one-sided ordals are all those in which the alleged criminal or accuser has to submit to a divine judgment alone and only comes into contact with the elements, especially water, fire and earth, or with sacred objects.

Depending on the ordal, the miracle was expected either in the case of innocence (for example in the fire test) or in the case of guilt (bar test, water test with cold water, Hostienordal).

The one-sided ordals include, for example, water testing with hot or cold water, fire test , Trankordal (e.g. in the Bible Numbers 5.11  EU ), lawn walk , lying in the grave under the earth, Bahrprobe , Losordal , an above Relics of spoken cleansing oath and the sacrament rehearsal .

In the investigation order , the prosecutor exposed himself to a divine judgment in order to prove the accuracy of his accusation.

Defense ordeals are about fending off an allegation , i. H. the accused subjects himself to an ordal to prove his innocence.

In the two-sided judgments of God, the defendant is faced with a plaintiff or a troublemaker with a recognized peace-lover.

These include, for example, duel , cross- ordal and candle-ordal .

Often in our modern linguistic usage, remnants of the former application and also the popularity of the judgments of God remain comprehensible. For example, the proverb “This is why I put my hand in the fire” reminds of the ancient divine judgment of the ordeal.

The poison test in Ephesus (altar wing of the Dominican church Friesach / Carinthia, 1500–1512)

The Trial by Fire ( Roman rituals of the Lambach Abbey Library , 12th century)

The water sample (from the title page of a witch's treatise by Hermann Neuwalt , Helmstedt 1584)

In the course of the centuries, according to Siegbert A. Warwitz, the following eight main types of ordeals have emerged in the European cultural area, whereby with the increasing profanation of social thinking, ordals are also understood more generally as the arbitration of a "power of fate" that is decisive for life and death:

The “blood test” or the “Bahrgericht”, Latin “ius cruentationis”, is based on the old popular belief that the wound of a murdered person begins to bleed again when the murderer approaches the bier and the perpetrator unequivocally convicts this according to God's judgment can be.

During the poison test, the accused was given a deadly "curse water" which, if guilty, caused the bowels to swell and lead to death, but remained ineffective for an innocent person.

The trial bite or the “iudicium offae” was supposed to clarify the question of guilt about a (indigestible) food that was stuffed into the mouth of the accused. If he had to vomit it again, that was considered proof of guilt.

The trial by fire

The ordeal by fire was often used as a remedy in witch trials . A glowing iron had to be carried in the unprotected hand or barefooted over a row of glowing plowshares. The subsequent physical injury or intactness or the rapid healing were decisive for the judgment.

During the water test or the “iudicium aquae frigidae”, the defendant, who was thrown into the water, naturally had to sink. If he stayed on the surface of the water, this meant a rejection by the "pure water" and thus a guilty verdict.

The kettle trap or the iudicium aquae ferventis presented the accused with the task of fetching an object with unprotected hands and arms from a kettle of boiling water. If he remained unharmed, this spoke for his innocence and led to the acquittal of all allegations.

The duel served to prove who had the right on his side in a dispute. In the case of female persons, a court of honor could also be carried out by male representatives, as Heinrich von Kleist presented in a novella based on a medieval chronicle.

Inquiries to fate about one's own right to life in the form of the so-called Russian roulette , as the writer Graham Greene admits and describes as his own practice several times in his autobiography , in earlier times were often made with a drum revolver loaded with only one or two bullets practiced. Even today, people who have doubts about their meaning in life sometimes use a weapon or a life-threatening test of courage to challenge their fate for an answer to their right to exist. The hoped-for positive answer is then often greeted euphorically with sentences such as “Death didn't want me yet” or “Fate gives me another chance”.

Judgment of God as a motive in literature

The judgment of God is a popular subject in novels and stories from the Middle Ages, such as when Ekkehard of Viktor von Scheffel in the Judge of CF Meyer , in Ivanhoe by Sir Walter Scott and the children of darkness by Wolf of Niebelschütz .

A duel as God's judgment is important, among other things in the short story of Heinrich von Kleist The duel or the opera Lohengrin by Richard Wagner .

Even as late as 1862, Wilhelm Raabe tried a divine judgment in his novella The Last Right : Around 1704 a house fell and buried the villain under himself.