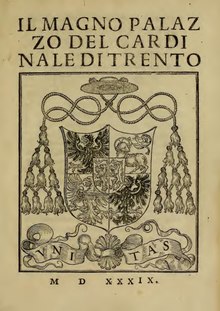 Bernhard came from a noble family from Trento. He studied law in Verona and Bologna and was then in the diplomatic service of the Diocese of Trento. On August 25, 1514, Cles became Bishop of Trent , was ordained a priest on September 8, 1515 and was ordained episcopal on September 11, 1515. Pope Clement VII elevated him to cardinal on March 9, 1530 and appointed him cardinal priest of the titular church of S. Stefano al Monte Celio on May 16, 1530 . On May 21, 1539 he became apostolic administrator of the Principality of Brixen .

Prince-Bishops and Bishops of Trento (1505–1920)
(Predecessor: Ulrich IV. Of Liechtenstein )