Rheticus was the son of Georg Iserin, the Stadtmedicus von Feldkirch, and the northern Italian nobleman Thomasina de Porris. His father was charged with witchcraft and fraud in 1528 and executed. Georg Joachim Rheticus first learned at the Latin school in Feldkirch and studied mathematics in Zurich from 1528 to 1531 , then at the University of Wittenberg , where he obtained the academic degree of a master's degree in liberal arts in 1536 . Through the patronage of Philipp Melanchthon , he became professor of mathematics and astronomy in Wittenberg in 1537 . In the following year Melanchthon made it possible for him to go on a longer study trip to famous mathematicians and astronomers. In Nuremberg he visited the mathematician and editor Johannes Schöner and the printer Johannes Petreius , who presumably commissioned him to persuade Nicolaus Copernicus to publish his main work in Nuremberg. At least Petreius gave him three books from his publishing house as gifts for Copernicus. He then studied with Peter Apian in Ingolstadt , Joachim Camerarius in Tübingen and Achilles Gasser in his hometown.

From 1539 to 1541 Rheticus stayed with Copernicus in Frauenburg . Heinrich Zell , a student of Sebastian Münster , accompanied Rheticus to Prussia and during his stay with Copernicus, Zell was able to view all documents in the Duchy of Warmia and, together with Copernicus and Rheticus, created a detailed map of Prussia. Then Rheticus taught in Wittenberg, Nuremberg and until 1545 in Leipzig . He was on the road again until 1548, he visited Gerolamo Cardano in Milan and began studying medicine in Zurich. Again at the intercession of Melanchthon, he was accepted into the theological faculty in Leipzig. As a result of a scandal over an affair with one of his students, he had to leave Leipzig in a hurry in 1551 and then studied medicine in Prague. From 1554 he lived in Krakow as a practicing doctor and shortly before his death in 1573 he moved to Kaschau in Upper Hungary , where the imperial governor Hans Rueber zu Pixendorf (1529–1584) took him in.

Rheticus was the first and essential contributor to the spread of the Copernican world system . He was the only pupil of Copernicus and was able to convince him during his stay in Frauenburg to put his main work in print. During this time he published the first communication on the same in the Narratio Prima de libris revolutionum Copernici . On the way to Nuremberg to initiate printing, he published the mathematical part in Wittenberg, supplemented by tables of the sine and cosine functions that he had calculated. He had to leave the correction of the proofs for De revolutionibus to Andreas Osiander . He took out a theological treatise by Rheticus on the compatibility of the heliocentric system with the Holy Scriptures and anonymously replaced it with a new preface written by him, presenting the new system as a mere calculation model. Later Rheticus published the Ephemerides ex fundamentis Copernici (Leipzig 1550).

He also achieved significant merits through his ten-digit tables of trigonometric functions , progressing from 10 to 10 seconds , the calculation of which was only completed by his student Valentin Otho , who also published them in Opus palatinum de triangulis (Heidelberg 1596).

The lunar crater Rhaeticus was named in 1935 and the asteroid (15949) Rhaeticus in 2001. In 1976 the Rheticus Society named after him was founded in Feldkirch . 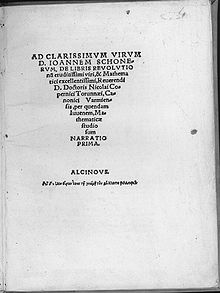