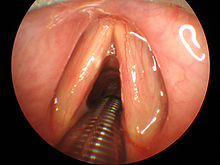 View of the vocal folds in an intubated patient

In endotracheal intubation (often also called intubation in the narrower sense for short ), an endotracheal tube (hollow probe made of plastic) is inserted into the windpipe ( trachea ) through the mouth ( orotracheal ), nose ( nasotracheal ) or a tracheostoma . Sealing by means of a balloon ( cuff ) protects the airways from the ingress of secretions ( aspiration ) and enables safe artificial ventilation . Intubation is now the standard method of securing the airway . It is used in anesthesia , intensive care and emergency medicine for patients under anesthesia , unconsciousness or acute respiratory disorders.

The introduction of a tube with two lumens ("double lumen tube") enables side-separated ventilation of the lungs, which is required for some procedures in thoracic surgery . This is sometimes also described as endobronchial intubation , since the tip of the tube comes to rest in a main bronchus .

Alternatives to endotracheal intubation are aids such as the laryngeal mask , laryngeal tube and combitubus , which are often used when the tube is unable to position correctly ( difficult intubation ). 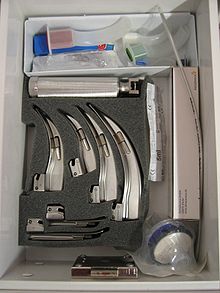 Endotracheal intubation is used to create a secure ventilation path for patients who do not breathe adequately themselves and for those who do not have protective reflexes . Intubation prevents obstruction of the upper airway and offers very good protection against aspiration if the cuff (block cuff, small balloon at the end of the endotracheal tube) is inflated (blocked) in the correct tube position and thus seals the trachea. This means that stomach contents, blood or foreign bodies cannot get into the lungs, or only in small amounts. 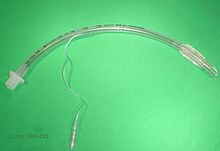 The endotracheal tube is a slightly curved, approx. 25-30 cm long plastic tube , the outer diameter of which in small children corresponds approximately to the diameter of the patient's little finger. At the mouth end, the tube has a connection piece for a ventilator or a resuscitator. The opposite end is beveled. A small balloon, the so-called cuff, is attached one to two finger widths above it. This can be filled with air via a hose attached to the tube with a valve. This allows gaps between the tube and the trachea to be closed: The trachea is thus sealed; the only way into the lungs is through the tube. This reduces the risk of aspiration.

There are several types of endotracheal tubes for oral or nasal intubation. Tubes are either flexible ( spiral tubes ) or preformed and relatively rigid. Most tubes have an inflatable cuff that can help prevent air leakage and aspiration. The spiral tube is characterized by the fact that the plastic tube contains many ring-shaped reinforcements. This prevents kinking and ensures adequate ventilation . This is e.g. B. in goiter operations - necessary because a normal tube would kink due to the storage.

Traditionally, tubes without a cuff were often used for children up to the age of 8. Because of the narrowing of the windpipe behind the vocal cords (subglottic narrowing), a tube of the right size usually seals sufficiently in children. The advantage is that possible damage to the mucous membranes from the inflated cuff balloon or from hard plastic folds of the cuff when using uncuffed tubes can be prevented. The disadvantage is that a tube that is too small cannot be sealed without a cuff and a risky tube change becomes necessary. With modern cuff material and close-knit control of the cuff pressure, the use of cuffed tubes in children has proven to be safe in the context of intubation anesthesia. In the meantime, the use of cuffed tubes is recommended, especially in emergencies, as the risk of changing the tube is eliminated if the tube is too small.

Endotracheal intubation is usually done by direct laryngoscopy (conventional procedure), whereby a laryngoscope is used to visualize the glottis and the tube is inserted under direct vision. This technique can only be used in comatose, anesthetized, or heavily sedated patients with local anesthesia. The patient should be placed in the Jackson position (named after Chevalier Jackson , American laryngologist, 1865–1958), that is, with the head up and the neck stretched out. An alternative is fiber-optic intubation. This works under local anesthesia using a flexible endoscope , the so-called bronchoscope, or a transportable, semi-rigid intubation fiber optic . After successful intubation, the tube is held by the intubator until it is fixed, protected by a bite wedge if necessary .

In certain cases, a blind attempt at intubation, i.e. an attempt at intubation without laryngoscopic nasal vision, can be undertaken. This method was introduced by the British anesthetist Sir Ivan Whiteside Magill (1888-1986). The method is particularly suitable for intubation of the awake patient in difficult intubation conditions, especially if a bronchoscope is not available. In times of diverse alternatives (see below), blind intubation is practically no longer performed.

Intubation is a major problem for many medical professionals, although it is an important medical measure in the management of respiratory arrest. This is due, among other things, to a lack of opportunities to exercise, but also to the “manual” demands of this measure. That is why there is a resuscitation team available in many clinics , which is usually provided by the anesthesia department or the intensive care unit .

The intubation technique can first be learned on the model and then further improved under supervision in the anesthesia department. In the meantime, various manufacturers offer exercise manikins, which, however, cannot always perfectly represent the very different airway conditions.

A calm procedure, a suitable working height , a good view with the laryngoscope, efficient suction , adequate immobilization of the patient, a guide rod in the tube and trained assistants are important for successful intubation .

The following reliable intubation criteria are used to check the correct tube position:

A dangerous complication is the incorrect intubation of the esophagus (esophagus), which, if not discovered in time, has a fatal outcome: Instead of the lungs, the stomach is ventilated and the patient suffocates. This was feared before the routine measurement of end-expiratory carbon dioxide. Nowadays, the undetected incorrect intubation only occurs outside of standard monitoring. If the doctor recognizes an incorrect intubation, he must correct it immediately.

A failed intubation becomes a complication especially if the patient cannot be adequately ventilated by other means. Especially after unsuccessful intubation attempts, swelling and bleeding can obstruct the airways. Therefore, for routine intubations (for example in anesthesia) there is always a plan to manage a difficult airway. In most cases, a special cart is provided with material for difficult intubation.

A dreaded complication is the so-called aspiration . A so-called RSI ( Rapid Sequence Induction ) is performed in patients with normal airways and an increased risk of aspiration .

Another danger is injury to the vocal cords.

If the tube is advanced too far, only one lung may be ventilated; it has become an accidental endobronchial intubation. Because of the shape of the bifurcation, the right main bronchus is typically intubated. However, this problem can easily be identified by auscultation , i.e. by listening with a stethoscope , and remedied by pulling the tube back one to two centimeters.

With long-term ventilation , the pressure of the cuff can cause necrosis or ulceration of the tracheal mucosa. Monitoring of cuff pressure in intensive care units is therefore common.

It is less common for teeth, especially incisors, to break out of the upper jaw through the laryngoscope. In addition, irritation of the parasympathetic nervous system , part of the autonomic nervous system , can in very rare cases lead to reflex respiratory arrest or even cardiac arrest. If the anesthesia or unconsciousness is not deep enough, there is a risk of vomiting during intubation. Therefore, the patient must stay sober during planned anesthesia.

Less common is lung surgery and z. B. in the spine surgery common selective endobronchial intubation, in which the tube is led into a main bronchus for ventilation of only one lung .

Endobronchial intubation can also be used in emergency medicine in extreme cases. If an inhaled foreign body cannot be removed upwards from an unconscious patient and if it is too deep for a cricothyrotomy, one can try to push it down with the tube into a main bronchus so that the other lung can then be ventilated and the patient has a chance of survival. After the vital function has been secured in this way, the foreign body must of course be removed and, if necessary, cleaned and rinsed using bronchoscopy in order to avoid pneumonia .

If endotracheal intubation does not secure the airway ( difficult intubation ), a number of alternative methods are available. Bag-mask ventilation ensures the supply of oxygen until the patient wakes up again. A video laryngoscope can improve the view of the glottis. Various alternatives are also available with the laryngeal mask , laryngeal tube and combination tube . If no oxygen supply or intubation is possible in any way (can not-ventilate-cannot-intubate situation ), the last resort is the cricothyrotomy , in which a surgical access to the respiratory tract at the level of the larynx is created by placing the membrane ( ligamentum conicum ) between Cricoid and thyroid cartilage is opened.

For longer ventilation, the tracheotomy is an alternative to endotracheal intubation. The tracheotomy is a surgical procedure in which the soft tissue of the neck provides access to the windpipe . Indications for a tracheotomy can be, for example, the need for long-term ventilation after accidents or operations, neurological diseases with disorders of the swallowing reflex, radiation treatment of the head or neck or laryngeal paralysis.

A first report on endotracheal intubation and subsequent ventilation of animals comes from 1543. Andreas Vesalius pointed out in this report that such a measure could be life-saving under certain circumstances. However, he went unnoticed.

In 1858 the English anesthesia pioneer John Snow wrote about endotracheally performed chloroform anesthesia in rabbits. In 1869, the German surgeon Friedrich Trendelenburg performed an endotracheal intubation on humans for the first time to guide anesthesia. Here he inserted the tube with an inflatable cuff through a temporary tracheotomy .

In 1878, the Glasgow surgeon William Macewen undertook the first orotracheal (carried out through the oropharynx into the windpipe). Endotracheal positive pressure ventilation was paved the way from 1905 by Ludolph Brauer .

In the years of the First World War , Ivan Magill and Robert Reynolds Macintosh in particular developed profound improvements in the use of intubation. The most common interchangeable blade of the laryngoscope is named after Macintosh, the bend of a tube and the Magill forceps for positioning the tube during nasal intubation are named after Magill .

The negative attitude of the influential surgeon Ferdinand Sauerbruch prevented intubation from spreading in Germany before the Second World War, which was represented by Franz Kuhn among others .