First Day of School in Upernavik 2007: The external appearance is deceptive uniformity of the population of Greenland before

In anthropology (human studies) and human biology, population denotes a group of people who are connected to one another due to their history of origin, form a reproductive community and live in a delimited spatial area at the same time. According to the Italian population geneticist Cavalli-Sforza, there are several differences to the biologically defined population . The boundaries of a population are drawn largely arbitrarily and are often based on states or ethnic groups . Population is also used synonymously for the sociological term population . 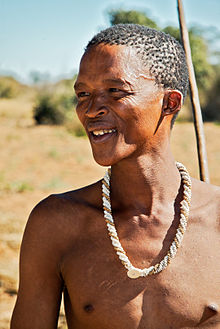 The Khoisan in southern Africa are older than any other ethnic group of modern man ; they can be clearly separated from their neighbors due to an isolation that has lasted for almost 100,000 years

Population is not simply a synonymous term used in place of the biological terms “race” or “subspecies”. It is a fundamentally different approach. Therefore, a more detailed distinction between the terms is described below.

The term “breed” basically suggests the notion of qualitative differences, as is known from livestock breeding . In contrast to the consciously targeted selection of certain characteristics of animals, which often come at the expense of fitness and can then lead to creatures whose physical condition is more or less degenerate , natural evolution basically leads to an improved adaptation of living beings. Therefore, the term race is also avoided in biology today. Instead, one speaks of varieties and subspecies .

It may be irritating that the old breed names can still be found in human genetic studies. Here the boundaries of the populations were deliberately drawn according to racial theories in order to subsequently refute them. For example, the basic theory of the three great races Mongolide , Europide and Negride could be refuted. Cavalli-Sforza writes in this context: "Of course one must choose the populations to be examined in such a way that one obtains interesting results."

The subspecies (subspecies) is the taxonomic rank directly below the species in the biological system . A subdivision of (today's) Homo sapiens into subspecies does not make sense for two reasons:

The following important information is missing from this article or section:
Aspect of Linguistics
Help Wikipedia by researching and pasting it .

A population is a synonym for the population of a certain area or according to an arbitrary delimitation. The characteristics according to which this delimitation is chosen vary depending on the objective. In the statistical sciences , the population describes the set of all characteristic carriers with matching identification criteria (factual, spatial and temporal). Accordingly, a population does not have to be determined by a specific geographical area such as a state.

In the Schlaining Declaration against Racism, Violence and Discrimination, a group of scientists declared in 1995 that the distinction between genetically delimitable populations has proven to be untenable due to recent advances in molecular biology.

The appearance of clearly definable differences between people of different origins - which one can easily succumb to in everyday life - arises from the process of intuitive categorization , which is a universal part of our thinking. This is also the reason for the feeling that black Africans or Asians all look the same : we involuntarily include them in the category of "others".

Luca Cavalli-Sforza and his brother Francesco explain the discrepancy between the difference in external appearance and the uniformity of the genetic makeup in their book Different and Yet Equal in 1994 as follows: “The genes that react [in the course of evolution ] to the climate, influence the external characteristics of the body because adaptation to the climate primarily requires a change in the body surface (which, so to speak, represents the interface between our organism and the outside world). It is precisely because these features are external that the differences between the "races" are so obvious that we believe that equally blatant differences exist for the rest of the genetic makeup. But that is not the case: with regard to the rest of our genetic makeup, we differ only slightly from one another. ”The Cavalli-Sforza brothers were instrumental in applying the concept of population to humans.

Population genetic studies have shown that around 85% of the genetic variation is found within populations. In contrast, the genetic differences between the populations of different continents are comparatively small at around 6 to 10%. With these percentages it should also be remembered that it is only a quantitative assessment. In comparison, the genomes of humans and chimpanzees are 98.5% identical. The gene activity plays an additional role here. This is particularly evident in language development and language acquisition , which - to stick with the example of comparison - only take place in this form in humans.

In addition, the (formerly supposedly race-specific) differences between the populations do not reveal any clear boundaries on closer examination of the geographical distribution. The transitions between the "races" are (with a few exceptions such as the Australian Aborigines) fluid.

Family tree of modern man (Homo sapiens) according to Cavalli-Sforza

Theoretically, populations can develop into subspecies and ultimately new species if they are isolated from one another. The spread of humans across the earth has led to such isolated populations in prehistory and early history . Evolutionary adaptation to the changed climatic and environmental conditions, to other foods or pathogens led to the development of new characteristics such as skin , hair and eye color , body size , Mongolian folds , sweat production , lactose tolerance and much more in the mostly quite small groups . Modern human genetics now make it possible to use genetic differences to calculate when new populations emerged and how they spread.

It was found that human evolution probably accelerated in the last 40,000 years because of the increased population size of humanity as a whole and new environmental influences through immigration to previously unpopulated areas and through the invention of cultural techniques such as agriculture, new approaches for the work of natural Selection provided. The population grew steadily, and over time there was more and more intermingling of previously isolated populations, so that today no clear boundaries can be recognized. Accordingly, the term “population” in relation to humans is generally only understood today as an arbitrary delimitation that is used primarily for research purposes. While Cavalli-Sforza only differentiates between Sardinians (and Basques ), Europeans , Iranians and Sami in Europe, for example , Jun Z. Li delimits in his study from the Human Genome Diversity Panel (a collection of genetic information from around 1,000 individuals from 51 populations; 2008 ) Adygen , Russians , Orcadians ( Orkney ), French , Basques , Italians , Sardinians and Tuscans .

However, all studies come to the conclusion that the greatest genetic diversity exists within the populations of South and East Africa and the smallest among indigenous Americans . This fact is seen as clear evidence of the out-of-Africa theory , which postulates that Homo sapiens originally came from East Africa.

The populations studied by Cavalli-Sforza (populations in brackets are mentioned in the book, but not included in the family tree - presumably for the sake of simplicity)

Interpretation according to Cavalli-Sforza

As a result of extensive research by Luigi Luca Cavalli-Sforza , a family tree of 38 human populations and their respective genetic relationships or the time at which the separation from the original population took place was created. The smooth transitions on the world map make it clear that demarcation of populations is almost always arbitrary. The map was created by coloring the geographically located populations with the help of a rainbow color scale, to which the numbers for the respective genetic difference were converted. Cavalli-Sforza himself had also oriented himself on linguistic findings, for example from August Schleicher and Merritt Ruhlen .

In many parts of the world there are special features, some of which show episodes of a very strong mixture of populations over the centuries. Analyzes of the mitochondrial DNA (inherited in the maternal line of inheritance) and of haplogroups of the Y chromosome (inherited in the paternal line of inheritance) in the Israeli Druze , a religious community that lives in inaccessible mountain regions in the Middle East and who today almost exclusively marry endogamously , by a team of Israeli and US-American scientists, based on the high genetic diversity with simultaneous deviation from neighboring groups, that the information passed on in the oral tradition, the Druze originally came from the mixture of some groups that were not related to one another, is probably correct.