This article treats Mongolids as an outdated racial term. For the outdated term for people with Down syndrome, see Mongoloide .

Mongolid or Mongolid is an anthropological collective name that is no longer in use for a number of East , Central and Southeast Asian (sometimes also Arctic , American , Australian and Pacific ) populations. 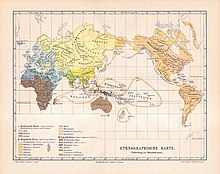 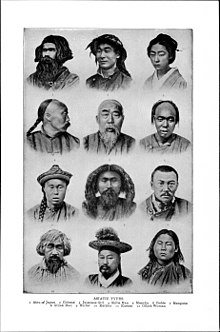 According to outdated racial studies, Mongolids belong to the three fundamentally different great races alongside Europids and Negrids . The classification as a so-called "large breed" was more or less arbitrary on the basis of (obvious) common characteristics that were assumed to have a common origin or a genetic relationship. Molecular genetic data, however, show an inhomogeneity of the group summarized as Mongolids and contradict a division into "large races".

The supposedly homogeneous characteristics of the Mongolids in contrast to the other assumed "human races" are considered to be "clearly refuted" in terms of molecular biology and population genetics. Each gene has its own geographical focus of distribution. In order to prove the existence of a breed, the main distribution areas of a large number of genes of a certain population would have to be largely congruent and distinguishable from other populations. However, there is no uniform geographic overlap for all East Asians (or Chinese, Siberians, Indians, etc.). The external differences between the so-called “Mongolids” and other “races” represent only a very small part of the genetic make-up that goes back to the adaptation to different climates.

Eskimide and Indianide were not assigned uniformly to the actual Mongolids. Melanesians, Negritos and especially Australids (Australian peoples) were also assigned inconsistently. Originally they were counted among the Negrids, partly treated as a separate "race group" and assigned to the Mongolids in later theories.

Typical characteristics of the Mongolids (in the narrower sense) were pronounced cheekbones, low nasal roots , black and straight hair, yellowish-dark complexion , sparse body hair and in particular the so-called Mongolian fold. The Mongolian spot , a bluish birthmark usually on the back, buttocks or sacrum of a newborn, was also considered an additional characteristic .

The Mongolids were subdivided into further different " small races" according to the race system - which was in use until the middle of the 20th century - whose delimitation is, of course, much more problematic than that of the three "large races". Despite the enormous amounts of data on various physical characteristics that were collected to determine race, the assessment always remained subjective, Eurocentric and so artificially constructed that the results corresponded to the previously formulated expectations.

The following classification was found in the 1978 guide to the anthropological exhibition at the Natural History Museum Vienna .

Mongolid in the strict sense

The division of the subgroups is different, for example

In a narrower sense, however, it meant Asian peoples.

Distribution: mountain forests of southern China, rear India, Indonesia to the border of New Guinea, island chains of East Asia to northern Japan. Palemongolids come in numerous regional varieties. They form the basis of the Japanese and Malay populations.

Distribution: Arctic coasts and island landscapes including Greenland and the part of the Chukchi Peninsula that lies on the Bering Strait.

Distribution: South of the USA, Mexico, North of Central America.

Distribution: dry steppes and grassy plains of the Gran Chaco, the Pampas and Patagonia.