The Roman snail ( Helix pomatia ) is a shell-bearing land snail , which is systematically counted to the land snail (Stylommatophora) and here to the family of the Helicidae .

The Roman snail occurs in light forests, bushes and open habitats, especially on lime-rich, not too dry soils, sometimes also following cultivation in cultivated land that is not used too intensively. She loves warmth and is true to location. In contrast to other snail species, it is able to adapt to different living conditions. Roman snails are found in the west as far as central France and southern England, in the north as far as southern Sweden and Norway, in the east as far as Estonia, Belarus and western Ukraine and in the south as far as northern Italy, on the Balkan Peninsula as far as Macedonia, with the species being distributed in (early) historical time was promoted by humans (cf. the English name "Roman snail"). This makes it the most widespread species of the Helix genus in Europe - alongside the smaller spotted garden snail ( Helix aspersa or Cornu aspersum ), which occurs in the Mediterranean and Western Europe , but whose genus is disputed.

In the wild, it can reach an age of eight years, with enclosure snails with good care a life expectancy of 20 years is not uncommon. 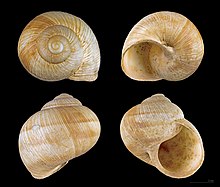 Fig. 1. Head of a Roman snail. The eyes can be seen as dark spots at the end of the upper antennae.

As with snails in general, the body is divided into the head, foot, intestinal sac and mantle . An adult Roman snail can grow up to 10 cm long and weigh about 30 g. The brown case reaches a diameter of 3 to 5 cm.

External breathing takes place with a clearly visible breathing hole that leads into the mantle cavity, the walls of which are richly equipped with oxygen-absorbing blood vessels.

The Roman snail, like other shell snails, forms a helically wound shell made of lime , also known colloquially as a snail shell. In a fully-grown Roman snail it reaches a diameter of about 3 to 5 cm. It is mostly dingy straw yellow with transverse grooves , but brown tones from beige to dark brown are also possible. Sometimes the case is banded tone on tone. It almost always has the shape of a right-hand screw. It is left-handed only in about one in 20,000 copies. These animals are also called the snail king . The scientific generic name Helix refers to the screw shape of the housing.

The snail is able to repair light to moderate damage to its "house".

The Roman snail belongs to the group of gastropods , which means something like gastric pods. Because behind the head is her muscular crawler on the sole. With this, the Roman snail crawls across the ground, laying and leaving a trail of damp slime and carrying its shell. She stretches out her four antennae . In case of danger, it retreats into its snail shell. The snail's speed is about 7 centimeters per minute (4.2 m / h). The speed depends on the air temperature. Roman snails are very good at climbing.

The mucus of the snail consists largely of water, mucoproteins and polysaccharides . It can absorb a lot of water quickly, but it releases it slowly. The slime is vital for the snail and has various functions that serve to protect and defend it.

The Roman snail has one eye in each end of the two long, upper antennae (Fig. 1). The eyes (Fig. 2) consist of an anterior and a posterior chamber. The anterior chamber of the eye is bounded to the front (outside) by the skin and to the rear (inside) by the retina that forms the pupil . In the central area opposite the pupil, the skin consists only of a single-layer flat epithelium with a basement membrane. The anterior chamber is filled with connective tissue rich in intercellular fluid. The posterior chamber of the eye is filled by the lens (perhaps better described as vitreous ) and delimited by the retina, which consists of light-sensing and pigment cells. In contrast to the vertebrate eye, the sensory cells are on the outside, the pigment cells on the inside and border the lens with a thick basement membrane. The extensions of the sensory cells form the optic nerve.

The snail can also smell the upper antennae. The Roman snail tastes and feels with the lower feelers. The sensory cells are not limited to one organ. They are also located at the head end of the animal and decrease towards the tail end. The snail cannot hear.

The Roman snail feeds on soft, wilted parts of plants and algae, which it grazes with its rasping tongue, the radula , on which there are around 40,000 teeth.

Roman snails depend on a habitat in which they can ingest lime. They need this to stabilize their snail shell and to build the protective cover for wintering. If there is little lime in the soil and rock, the animals form only a thin-walled, weak housing; the lids are sometimes easily fragile or parchment-like, which reduces life expectancy and limits the natural distribution areas. In captivity, the Roman snail can be offered sepia shells or egg shells as a source of lime.

Adult snail with young animal The excretory organ for the green excrement is located on the side of the opening of the snail shell. 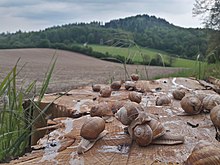 Many Roman snails on a stump at the Waldnerturm in the Odenwald near Hemsbach. 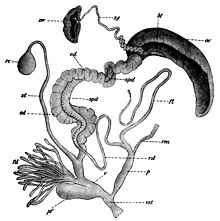 Roman snails are hermaphrodites , which means that every animal produces male and female germ cells . However, the snails cannot fertilize themselves. Rather, it comes to a love game between two animals, in which both snails - foot to foot - stand up together and drive each other about eleven millimeters long so-called love arrows into their bodies, which, covered with a stimulating secretion, increase the success of mating. At the same time there is not always mutual mating . Four to six weeks later, the snails lay 40 to 60 whitish eggs in an earth pit dug with the help of their foot and shell, which they close again after they have laid the eggs. From then on, the juvenile snails develop independently and hatch after about two weeks of embryonic development with a weight of about 0.1 grams. They eat their egg shells to take in lime and then dig themselves to the surface of the earth. Their snail shell is still very soft and many of the juvenile snails fall victim to predators , so that on average only five out of 100 Roman snails reach sexually mature age (two to three years). Natural enemies are insects (especially ants ), mites , spiders , nematodes , birds of prey and small mammals . 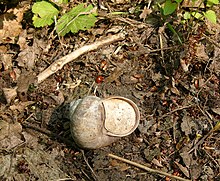 Roman snail with epiphragma after winter

The snails spend the winter in a cold rigor . After they have eaten a supply of food, they crawl into the earth and withdraw into their shell. The shell opening closes the snail with a lime cover ( epiphragma ), which is shed when it hatches in spring . If there is a lack of lime, they take up parts of the lid again.

In the case of severe drought in summer and the associated lack of water, Roman snails can also sleep dry . They also close themselves with a lid and thus delay the evaporation of the water stored in the body. Since the preparation for rigidity is connected with a profound change in metabolism and the creation of the lid and is a burden for the snail, it cannot be started or interrupted at will. It is a complex process that begins when it is dry and is also pursued when it rains in the meantime. Only when there is enough moisture in the environment for a long enough time does the snail uncover itself and then need a phase of rich food intake in order to be able to cover itself again if necessary.

The environmental factors required for the respective phases and the time intervals vary from region to region and also depend on the genetic makeup of the snail. This varies considerably across the distribution areas.

The ability to become dry rigid is used in Mediterranean cuisine . In Italy and Greece, for example, Roman snails are put into a marketable phase by placing them in large containers with dry egg pasta (spirelli). They begin to eat from the dry pasta, but then cover themselves up due to a lack of water and can be put on the market when filled in sacks. They can then be stored for months. The cold rigor, which is more common in northern areas, is less suitable for gastronomic use, since the snails "hatch" when the temperature is simply increased. 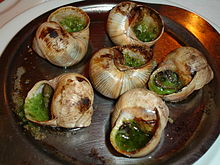 Roman snails are traditionally also food . For example, the Prussian State Railways already dealt with the "transport of Roman snails". Although Roman snails are now strictly protected under the Washington Convention , snails are still used as food in many countries. In France in particular , they are considered a delicacy . The snails in the food trade are therefore mostly from snail breeding today . They come from Burgundy , the Swiss Vaud and southern Germany . In the Swabian Alb they are produced and marketed as so-called Alb snails . In the Tyrolean town of Ellmau , the Roman snail is bred under the name Kaiserschnecke. You usually eat half a dozen or a whole dozen as a starter, prepared in the oven in so-called "snail pans" with herb butter .

In Switzerland, the municipality of Zell ZH has the Roman snail as its heraldic animal .

In 2013, a film by Sascha Seifert about the life of the Roman snail called Slow was released in cinemas.

Since the Roman snails have special enzymes for cleaving glucuronides , Helix-pomatia products are u. a. Used in the analysis of steroid hormones for the clinical-chemical diagnosis of endocrinological disorders in order to release the steroids bound to glucuronic acid in urine samples and to make them accessible for qualitative and quantitative analysis by GC-MS  - usually after derivatisation of the free hormones.

Mollusk of the year in Austria