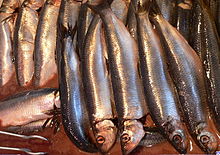 Whole herring, fresh from the barrel

Matjes are particularly mild herrings that are processed before reaching sexual maturity and that are matured in a brine using the traditional method using the fish's own enzymes . The original manufacturing process was developed in the Netherlands in the Middle Ages . As “ Dutch Matjes ” it is registered as a guaranteed traditional specialty .

The gills are removed by a throat cut and the herring is partially gutted.

There are pegs used, the end of May to early June are caught before their breeding season begins. Then they have a relatively high fat content (over 15 percent) and roe or milk are not yet developed.

The gills are removed by a throat cut and the herring partially gutted; Parts of the intestine and especially the enzyme-containing pancreas remain in the fish. The herrings are then placed in brine for about five days, traditionally in oak barrels . The enzymes of the pancreas partially ferment the matjes meat, which is understood as "maturation" of the matjes. The already easily digestible fish protein becomes even easier to digest.

In Dutch matjes, the salt content of the brine is significantly lower than in German Loggermatjes , which is why it is later also much milder in taste. To protect against parasitic roundworms , the Netherlands requires freezing of at least −45 ° C before salting. This means that Matjes can be produced regardless of the season .

According to the product description for EU-wide registration as GTS Dutch matjes , a herring that is at least three years old, caught in the months of May to August, matured or decapitated in brine or under dry salt and was previously frozen or was then frozen, has soft bones, can be filleted, shows small reddish sexual organs and a translucent white layer of fat and has white, tender, mildly salty meat.

The first matjes of the new fishing season are known in the Netherlands as Nieuwe Haring , Hollandse Nieuwe or colloquially as Nieuwe 'Neuer' . The auction of the first keg of Hollandse Nieuwe , which takes place every year on the so-called Vlaggetjesdag 'Fähnchentag' in Scheveningen , is a popular festival at which 95,000 euros (in 2012) were paid for the fish keg. The proceeds then always go to a good cause. Two forms of serving are common in the Netherlands: either the herring is held by the tail fin and then transported vertically into the mouth from above, or it is placed in a soft, slightly sweet wheat roll ( broodje haring ). In both cases, the herring is garnished with chopped onions. After a matjes herring, the Dutch prefer to drink a genever as a digestif .

In Emden in East Friesland on the North Sea coast there is also a herring festival every year, traditionally at the end of May and occasionally at the beginning of June. This festival, entirely dedicated to the start of the Matjes season, is visited annually by people from all over Germany and Europe. The Emden Matjestage took place for the 22nd time in 2011, in that year a visitor record of an estimated 150,000 to 200,000 was recorded.

Glückstadt in Schleswig-Holstein also has a long herring tradition thanks to its port and the herring loggers that existed there until 1976 . Every year, in June 2017 for the 50th time, there is the “Glückstädter Matjeswochen”, which is traditionally also opened by representatives of the state government. The longest matj table in the world was also set up in Glückstadt. The name "Glückstädter Matjes" has been included in the EU quality register since 2015 and is allowed to bear the protected geographical indication (PGI) seal .

Unlike simple salted herring with a salt content of over 20%, matjes do not need to be watered. Peeling off the skin takes some practice, but you can use herring fillets or double fillets. Fresh herring is silvery on the outside and pink on the inside. If it looks gray and smells dry, you should refrain from buying it. Filleted and skinless, the matjes does not need any further preparation, it can be eaten as a small snack with a few onion rings.

In northern Germany, jacket potatoes and green beans with bacon and onions are served with herring dishes, while in the Rhineland there is a tendency towards fried potatoes with bacon or black or wholemeal bread as a side dish, housewife- style herring is also popular with a dressing made from sour cream, apples, dill and onions. However, cream or yoghurt sauces are also common - and there is also a version ( Speckmatjes ) to which small pieces of smoked bacon are added. Matjes are also good for salads or can be placed in marinades.

Name and trading forms in Germany

The German term Matjes comes from the Dutch Maatjesharing . This is a modification of Maagdenharing , which means something like ' girl herring' or ' virgin enhering' and refers to the sexual immaturity of the caught herring. The limited fishing time guarantees the absence of roe and milk in the product.

In Germany there are four trading forms with "Matjes" as part of the name:

Herring, which is biologically matured by means of enzymes foreign to the fish and using sugar , also products of starch saccharification , and with table salt , also with spices , also with saltpeter , also otherwise in different ways "tasty, eg. B. sweet and sour ", are prepared on the German market as" Matjesfilet ... "with an additional reference to the ripening, z. B. in the Swedish way, in the Nordic way, or a similar reference.