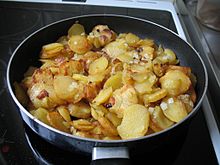 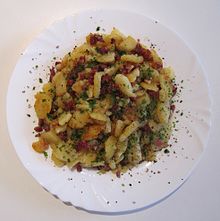 Fried potatoes is a general term for various recipes in which raw or pre-cooked potatoes are fried. In traditional high-level kitchens, fried potatoes refer to potatoes that are boiled in their skins, then peeled and cut into not too thin slices and fried in butter until golden brown (pommes sautées) .

However, recipes are also widespread in which fried onions , belly meat or bacon are added to the potatoes .

“ Fried potatoes Fried potatoes are always best from freshly boiled jacket potatoes, which are kept hot until they are fried. But you can also use leftover boiled or jacket potatoes. You cut the potatoes into slices and fry them in a flat pan in plain butter or in cooking fat or with bacon. If you like, you can also fry sliced ​​onions, which you put in the melted fat just before the potatoes. The potatoes are sprinkled with salt and roasted until they are light brown, carefully shaking and stirring them to protect them from burning. "

There are different opinions regarding the type and size of the potatoes to be used, the “right” pan , the frying fat, the seasoning and finally the consistency and taste of the finished dish. In general, however, a crispy rather than too soft frying result is desired. We recommend waxy potatoes, a well preheated pan, enough fat, not too many layers of potatoes in the pan, a longer cooking time with economical turning and the addition of onions or bacon only towards the end of the roasting time. However, onions and bacon can also be seared separately, as this is easier to prepare as desired than with the potatoes.

Salt , pepper , caraway seeds , marjoram , rosemary , garlic or sometimes sugar are used to season / flavor the dish . Sweet fried potatoes (also known as roasted potatoes or caramelized potatoes) are a specialty that is mostly only known in northern Germany as an important part of a winter kale meal . So-called "kale potatoes" are preferably used for this: the smallest potatoes up to approx. 30 mm in diameter, which are sprinkled with sugar in the pan and rolled in the brew created by the heat to caramelize .

Side dishes and use

As a simple dish, they are very good together with fried or scrambled eggs , aspic , sausage ( liver , blood or crackling sausage ), Knipp , fried herring or herring . They are also suitable as an accompaniment to meat and vegetable dishes. The farmer's breakfast with fried potatoes as a basis is also popular .

In the US, home fries (coarsely chopped, often skinned potatoes) and hash browns, similar to hash browns, are often part of a full breakfast . Fried potatoes are known in England .

In the Vogtland and Western Ore Mountains, the cut is "boiled potatoes cut into the pan". In Baden they are traditionally known as "Brägele" with bacon.

In Alsace , a similar dish is called roigabrageldi . The name comes from the Alemannic language and means something like "raw fried food". There are different types of preparation, both in the pan and in the pot. For example, potatoes, bacon and onions are stacked alternately. Roigabrageldi is traditionally eaten with a green salad and smoked pork shoulder.

In the 19th century, fried potatoes were the "feast" for workers in the rapidly growing industrial cities . Most of the people were of rural origin and rarely had the opportunity to prepare hot meals in the city. The proverbial roast potato ratio , the roast potato love or even marriage arose from homesickness or the longing for a warm meal - "like with nuts" - and the smell of the pan smelling of onions and bacon , which the industrial worker was willing to reward materially . Such or similar “roast potato love” ensured numerous widows survival , even before the introduction of social security , through the donations of the co-fed and paying guests and residents. The workers often had their families at home in the country. The "fried potato marriage" was therefore mostly just a simple community of convenience.