The title of this article is ambiguous. Further meanings are listed under Regnitz (disambiguation) .

The Regnitz is an almost 59 kilometers long left and southern tributary of the Main in Bavaria . As a body of water with the GKZ 242, it has a total length of about 162 km together with its source river Rednitz (39.62 km) and its source river Fränkische Rezat (63.51 km).

The Rhine-Main-Danube Canal runs in parts of the river bed, which , in addition to its function as a traffic route, supplies the Regnitz and Main rivers , which are threatened by temporary drought, with water from the Danube and Altmühl .

Whether the name is derived from the West Slavic Rekavica ('river') is controversial.

In Franconia , the easily confused names of Regnitz, Rednitz and Pegnitz are kept apart with the rule of thumb that R ednitz and Pe g nitz merge to form R e g nitz.

natural catchment area of ​​the Regnitz

The Regnitz arises in Fürth from the confluence of the Pegnitz and Rednitz and flows northwards through Fürth, Erlangen , Möhrendorf , Baiersdorf and Hausen . From Forchheim it flows northwest to Bamberg . Northwest of the city center of Bamberg, near Bischberg , the Regnitz flows into the Main at 384 km with an average water flow of 56.6 m³ / s, which exceeds it by more than a quarter of 44.7 m³ / s.

The Main-Danube Canal , the A 73 , the Nuremberg – Bamberg railway line and the Regnitz cycle path run parallel to the river in the Regnitz valley .

The part of the Main-Danube Canal (MDK), built between 1960 and 1972, runs from Fürth mainly as a side canal of the Regnitz, but between Hausen and Neuses uses the river bed of the dam-regulated Regnitz with the Forchheim barrage for a length of almost ten kilometers. The MDK also runs from the Bamberg lock to the Regnitz estuary for a good six kilometers in the Regnitz. These Regnitz sections are included in the Federal Waterway Main-Danube Canal; additionally are weir routes with the weirs Hausen, Neuses and Bamberg the Regnitz Federal waterway.

In the Regnitz there are endangered species of fish, such as the eel , the pike , the catfish , the nose , the barbel , the tench , the pikeperch and, in some cases, crayfish .

For ornithologists the Regnitz offers rich opportunities for observation of native duck species such as tufted duck , pochard and mallard , as well as the migrant teal and wigeon .

Play media file
How the water scoop works at Bruck 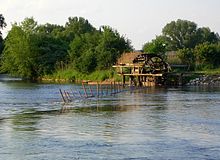 On the Regnitz, between 1250 and 1400, people began to irrigate the fields bordering the river with wooden water wheels. The operation of these wheels is documented for the first time in 1413. In 1805, around 190 such waterwheels were in operation on the Regnitz between Fürth and Forchheim over a length of approx. 25 kilometers, more than any other river in Central Europe. If you add the wheels on the Rednitz, around 250 water wheels were in use between Schwabach and Forchheim. In the meantime they have been largely replaced by modern pumping systems.

The main reasons for the heavy use of the water paddles on this section of the river were the sandy soils of the region and its hot and dry summers, both of which make heavy irrigation necessary. The even slope and the flat banks were advantageous for the use of these bikes. However, the regularly recurring spring floods , whose debris could destroy the wheels, were disadvantageous . According to the Baiersdorf Water Ordinance from 1693, which is still partly in force today, for this reason they may only be operated from May 1 to September 30.

To the north of Forchheim it was forbidden to use the water pumping wheels because the Regnitz was already navigable there and the wooden weirs (wings) running across the river that were necessary for the operation of the water pumping wheels allowed small fishing boats to pass through appropriate loopholes. The rulers of Bamberg had been interested in keeping the shipping route open as a traffic route to the royal palace in Forchheim since the 9th century. The weirs repeatedly gave rise to disputes between farmers and fishermen, for example because fishermen removed boards from the weirs to make it easier for them to pass through.

Around ten of the remaining water pumping wheels turn at Möhrendorf alone . Individual copies can be found in Fürth- Stadeln and Hausen near Forchheim. Another has been in operation since 2004 near the mouth of the Aurach near Erlangen- Bruck . Also on the Pegnitz in Nuremberg , a bike based on the historical model was put into operation again. The massive wooden structures, reminiscent of mill wheels, are nowadays set up by volunteers at the beginning of the summer season and dismantled and stored at the end of the season. Today they partly irrigate wetlands , which are supposed to maintain the food base for the numerous white storks that live in this area . A slightly scaled-down replica of such a water scoop is in the Franconian Open Air Museum in Bad Windsheim .

The wheels have had a practically unchanged structure since the 15th century. They consist almost entirely of beech and oak wood, with the exception of the iron shaft journals at both ends of the shaft, the four clamping rings of the shaft and the hoops of the Küumpfs (bucket). Each wheel is composed of around 600 individual parts. The shovel boards are attached to the bike using oak straps that are boiled for some time so that they can be bent into the desired shape. In addition, wooden nails of various lengths are also used, for example to attach the hulls to the bike. After the wheels are dismantled in autumn, up to a third of the individual parts have to be replaced in the course of the winter so that the wheels can be re-attached in spring. 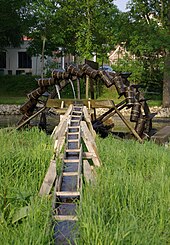 How they came up with the functional principle of this machine in Middle Franconia is controversial. Water paddle wheels (norias) driven by the current were already very common in the Middle East in the early Middle Ages. This knowledge could have come to Middle Franconia through returning crusaders, pilgrims or traveling merchants. But it could also have been a regional invention. An argument against importing the technology, especially by merchants, is that further north on the Regnitz the water wheels can be detected much earlier than in the then trading metropolis of Nuremberg and its surroundings. Perhaps the construction descriptions of the Roman architect Vitruvius handed down in monasteries were also used to solve the irrigation problem. Water wheels for driving mills can already be detected in the region well before the water scoop wheels.

Each water wheel draws around 1400 cubic meters of water around four meters high per day.

In the 19th century, rafts were carried out on the river from Nuremberg to Bamberg . A pumping station built in 2003 near Fürth draws water for irrigation of the Knoblauchsland .

Wikisource: From the Rednitz, and from the rivers and streams that pour into it  - sources and full texts