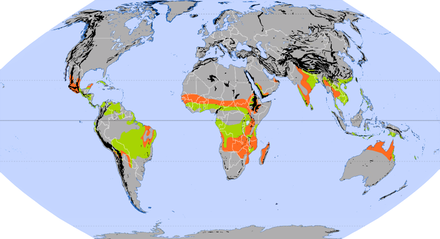 The zone of the summer humid tropics , also called alternating humidity tropics , is one of the nine global eco-zones according to J. Schultz. Today it occupies about 16.4% of the earth's land surface. At the beginning of the 21st century, around 20% of this is still in a largely natural state .

They cover that part of the tropical climate zone , which is characterized by a high variability of precipitation. In terms of area, this is by far the largest part of the tropics. The rainy and dry seasons are due to the seasonal oscillation of the inner-tropical convergence zone between the northern and southern tropics . The prevailing vegetation this ecozone can into the landscape types wet savannah , dry savannah , deserts and xeric shrublands , tropical dry forest and monsoon forest are broken.

The boundaries of the summer humid tropics are in reality fluid, so that an exact extent - as shown on the map - can in fact not be determined. This fact becomes understandable if one uses comparable geozonal models , e.g. T. have significant deviations. For example, consider the comparable zonobiom of the tropical-subtropical rainy season forests and savannas on the map of the zonobiome according to Walter and Breckle or the FAO Ecozones .

The changing rainfall means that many plants either restrict their growth or even partially wither. The dry seasons last between 2½ and 7½ months and the rainy seasons between 4½ and 9½ months. The further you get away from the equator, the less productive the zenith rains of the rainy season and the longer the dry season.

The zone, also known as the alternately humid tropics , differs from the always humid tropics on the one hand and the dry tropics on the other hand in that it is arid for several months and only humid during the rainy seasons . The difference to extra-tropical habitats is that the temperatures in them fluctuate more during the day than during the year, i.e. the difference between the average nocturnal lows and the mean daily highs is greater than that between the minima and maxima of the daily mean temperature of the year ( Time of day climate ).

Eco zones according to J. Schultz