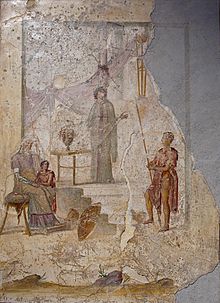 Kassandra (middle) draws lots with her right hand and predicts the fall of Troy in the presence of Priam.
( Fresco from Pompeii , National Archaeological Museum, Naples )

The god Apollo gave her the gift of prophecy because of her beauty . But when she rejected his attempts at seduction, he cursed her and her descendants so that no one would believe her prophecies. Therefore, in ancient mythology, she is considered a tragic heroine who always foresaw disaster but never found a hearing. Such unheard warnings are called cash register calls.

Origin and meaning of the name

Attempts from ancient times to explain the name etymologically have not survived. The Byzantine scholar Johannes Tzetzes derived the name in the 12th century from κάσις ( kásis "brother") and ἀνήρ ( anḗr "man") and concluded on the meaning of "having a brave man for a brother", an interpretation that continued into the 18th century Century had existed and was also listed in Zedler's universal dictionary . However, later authors rejected this. From a number of later hypotheses none could prevail in research and for Hjalmar Frisk the etymology is still unexplained.

This article or section needs revision: The subject of this module is the story of Kassandra's stabbing - or sparing. There are several sagas about this, which should be added to the article. In articles that refer to Kassandra's fate, different versions are sometimes given. It would make sense if you could refer to the different versions (to be added here).
Please help to improve it , and then remove this flag. 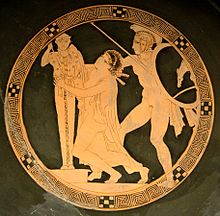 Ajax the Lokrer assaults Kassandra, who seeks refuge at the Palladion .
( Red-figure bowl from attica , around 440 BC, Louvre in Paris)

The god Apollo fell in love with Kassandra and gave her the gift of vision to emphasize his wooing. Kassandra, whose beauty Homer compared to that of Aphrodite , nevertheless scorned him. Thereupon Apollo cursed his gift because he could not take it away from Kassandra and added that no one would believe its predictions. So she called for the killing of Paris , foreseeing that it would bring great harm to Troy, and towards the end of the Trojan War , she (like the priest Laocoon before) warned the Trojans in vain of the Trojan horse and the cunning of the Greeks so that Troy went under.

After the conquest of Troy , Kassandra was raped by Ajax the Lokrer in the temple of Athena , where she had taken refuge. Agamemnon claimed Kassandra as a slave and took her to Mycenae . But after his arrival in Mycenae, he was stabbed to death by his wife Klytaimnestra and her lover Aigisthus in the bathroom. Cassandra, who knew about this fate because of her visionary gift and had also predicted it, was also stabbed by Clytaimnestra.

There is a tomb attributed to Kassandra near Mycenae. Originally, however, it was likely dedicated to a local deity. Kassandra's insignia on ancient images is the double ax of the Phrygian Apollo.

In the Iliad , the description of the war for Troy by the Greek poet Homer, Kassandra is found as the daughter of Priam and Hecabe , but she is not yet described as a seer. This traditional portrayal of Kassandra as a warning voice before doom seems to develop later. With Pindar and other Greek authors (such as Aeschylus in his tragedy Agamemnon and Euripides in The Trojans ) the gift of Cassandra's prophecy is almost assumed to be known. The only ancient work is the poem Alexandra from around 190 BC. The figure of Kassandra in the center. Under the name Alexandra , Kassandra was worshiped as a goddess by the inhabitants of Amyklai and Leuktra .

After Agamemnon has entered the palace in Aeschylus' Agamemnon tragedy and is approaching his death, the choir expresses ominous foreboding. This is followed by the great scene of Cassandra. In a first part she describes the horrific events of this family in this palace and then foresees details of the murder of Agamemnon by Clytaimnestra, in the second part anger and horror increase at the vision of the following events: their own imminent end. In doing so, she evokes that shyness, that horror and compassion in the audience, as do those in despair, who often radiate a mixture of profound knowledge paired with total helplessness. [8]

While Kassandra's vision of Agamemnon's assassination in Aeschylus relates to a future, albeit an imminent one, Seneca in his Agamemnon tragedy does it differently, less conventionally. He does not let the seer recite a prophecy, but she stands in front of the palace and describes in her vision what otherwise happens in a pondoscopy , what is happening right now inside the building, namely the murder of Agamemnon, the murderer of her family, and states explicitly: "The prophetic vision has never shown the crime so clearly: I see it, am right in the middle and enjoy it."

In the Aeneid of the Roman poet Virgil , Kassandra is also referred to as a seer who never finds faith. So recalls Anchises to one of her prophecies in which they refugees from Troy future and poor in Hesperia promised and no one had believed.

Representations in the modern age

Friedrich Schiller wrote the poem Kassandra in 1802 , which is based on the ancient legend.

The stories Die Seherin by Erika Mitterer and Kassandra by Christa Wolf provided literary adaptations of the topic . Even Marion Zimmer Bradley presents in her book The Fire of Troy Cassandra at the center and tells the story of the destruction from the perspective of the princess and priestess Kassandra (actually Alexandra), the daughter of Priam and twin sister of Helenus .

In Disney's Hercules , a television series based on the film of the same name, Kassandra is portrayed as a cynical teenager with an intrusive but amiable admirer in the guise of her classmate Ikaros .

The Swedish pop group ABBA took up Kassandra in their 1982 song Cassandra , which describes the day after the defeat of Troy. In this version, Kassandra can escape the conquerors of Troy on a ship.