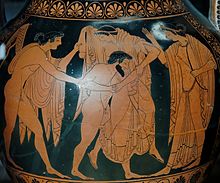 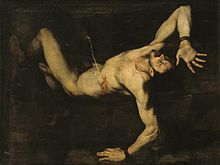 Tityos ( Greek  Τιτυός ) is in Greek mythology an earth-born giant from the island of Evia , a son of Gaia , in another version a son of Zeus with Elara . According to this, Zeus hid Elara after he had impregnated her from his jealous wife Hera in the earth ( Gaia ). The mother died giving birth to the huge child.

When the giant met the beautiful Leto , he tried to rape her. Leto called for help, and their children Apollon and Artemis struck Tityos with their arrows. As a punishment for the crime, he was banished to the Tartaros , where two vultures have been feeding on his liver and heart, which is constantly growing again. Along with Sisyphus and Tantalus, he is one of the three great sinners in Greek mythology.

Representations in the fine arts