Sikinos ( Greek Σίκινος ( f. Sg. )) Is a Greek Cycladic island . Together with other uninhabited islets, it forms a municipality within the South Aegean region .

Sikinos is located in the southern Aegean Sea , 31 km northwest of Santorini , 47 km east of Milos and 33 km southwest of Naxos . The closest island of Ios is 6.5 km to the east. The distance to Folegandros is 10 km. In between, in the Folegandros Sikinos Strait, are the uninhabited islands of Kalogeros, Karavas, Kardiotissa , and Dyo Adelfia. With an area of ​​41.676 km², the length is almost 14 km and the maximum width is 4.7 km.

Sikinos is one of the most mountainous Cycladic islands. The highest point, the Troulos mountain in the center of the island, reaches a height of 552 m. On the northwest side, a 300 m high ridge runs through the island. The main town of Chora is located on the edge of a cliff at about 270 m. The port of Alopronia is on the south side of the island.

Terrace cultures, which were laid out with dry stone walls (ξερολιθιές) in order to be able to use the rough, mountainous island for agriculture and to protect the soil from the erosion of winter rains, have been part of the landscape since ancient times. 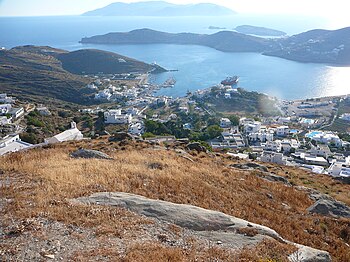 Sikinos on the horizon as seen from Ios

Originally the island was called Oinoie and got its later name from Sikinos, the son of the nymph Oinoie and Thoas , the king of Lemnos . When the women of Lemnos killed all the men , Hypsipyle spared her father Thoas, hid him in a box and threw it into the sea. Fishermen from the island of Oinoie found these and brought Thoas ashore. There he fathered the nymph Oinoie Sikinos, who then gave the island its name.

Sikinos has been settled continuously since the Mycenaean period . The geographer Skylax already reported on the ancient city of Palaiokastro in the east of the island near Cape Malta (Ακρωτήριο Μάλτα). Presumably, however, the island was already inhabited in prehistoric times. An ionic settlement could also be detected.

In ancient times, the island was known as Oinoe (Οινόη 'Island of Wine') due to the extensive viticulture and quality , as Herodotus , Strabo and Ptolemy reported. After a short period of Persian occupation, Sikinos stepped in in the 5th century BC. In the Attic League and had to pay an annual contribution of 1000 drachmas. The island came at the beginning of the 3rd century BC. First under the control of the Ptolemies and then to the Kingdom of Macedonia . As a result of the Macedonian-Roman wars , it was conquered by the Romans and a place of exile. Wall remnants of public buildings and temples at Agia Marina, south of Episkopi, indicate a settlement from the Hellenistic and Roman times. At the end of the 4th century AD, the island came under the Byzantine Empire .

After the conquest of Constantinople during the Fourth Crusade , Sikinos came under the influence of the Republic of Venice for a short time in 1204 . In 1207 Marco Sanudo conquered Sikinos and became his personal property in the Venetian Duchy of the Archipelagos . It was not until the construction of the Kastro that a closed village emerged again after the people had lived scattered on the island during the Byzantine period. After it was captured by the Byzantines (1262), the island came into the possession of the Dacoronia family (1307–1464). Subsequently, the Gozzadini family from Bologna took over Sikinos until 1617, which since the conquest by Chaireddin Barbarossa's fleet in 1537 had paid tribute to Ottoman rule . With a four-year hiatus when Sikinos was Russian during the Russo-Turkish War between 1770 and 1774, the island was under the control of the Ottoman Empire until 1821. With the London Protocol of 1829 , Sikinos, like the other Cyclades islands, became part of the new Greek state.

During the Second World War , Sikinos was first occupied by Italy (1941-1943) and, after the surrender, by the German Wehrmacht until 1944.

The uninhabited islands of Avoladonisi, Kalogeros, Karavos and Kardiotissa belong to the municipality of Sikinos .

The main town Sikinos, often also called Chora, consists of the two districts Kastro and Chorio . The construction of the Kastro (άστρο της Σικίνου), today's core of Chora , was probably started in the second half of the 15th century in the north in the immediate vicinity of a steep rock chasm at a height of about 270 m . The Kastro was built according to the typical pattern of fortified Cycladic villages. The rectangular floor plan is about 60 m by 70 m. Originally, access to the Kastro was only possible via two entrances, the main gate Porta (Πόρτα) and a smaller side gate Paraporti (Παραπόρτι). The main gate was demolished during the Italian occupation (1941-1943). With the exception of the Church of Timios Stavros (Τιμίου Σταυρού) or Pantanassa (Παντάνασσας), all buildings in the Kastro were also demolished.

The relatively young port of Alopronia, also Ano Pronia (Άνω Πρόνοια), is located on the south side about 3.5 km from Chora. Over the past few years, Alopronia has become a modest resort due to its proximity to the island's few beaches.

Episkopi (Επισκοπή) is located in the southwest of the island about 4 km southwest of Chora near steep cliffs, at about 270 m altitude.

The Dutch Pasch van Krienen was already on Sikinos in 1771 and reported in his notes about a temple. After the mineralogist Karl Gustav Fiedler reported on the temple to Ludwig Ross in Athens after his travels through the Kingdom of Greece, the sanctuary was first archaeologically examined by Ross. Ross was certain that it was the temple of Apollon Pythios in the ancient city of Sikinos. Because inscriptions were found nearby that indicated a temple.

The complex consists of the church Kimisis tis Theotokou (Κοίμησης της Θεοτόκου Dormition of the Theotokos ), the Byzantine chapel of Agia Anna (Αγία Άννα) as well as derelict cells and other buildings.

The original building, with the external dimensions of about 10 × 7 m, was a Roman mausoleum , the type of which became popular in the Aegean Sea and in the southwest of Asia Minor in the 2nd and 3rd centuries AD. Presumably at the end of the 7th century, the building was converted into an early Christian church.

The church received its present form in the late Byzantine period in the second half of the 17th century after an earthquake caused severe damage and the vault above the cella collapsed. The cella was covered with a dome consisting of twelve segments. A small apse was added to the east wall and the formerly open west facade was provided with masonry. An iconostasis was added to the apse. The monastery was built around the church at the same time. The bell tower probably dates from the beginning of the 18th century. The only remaining bell is signed with the name of the Venetian bell foundry family de Polis in a manner typical of the early 18th century and is the only known outside of the Adriatic.

Somewhat southwest in the area near the Agia Marina chapel (Αγία Μαρίνα) remains of walls, marble parts and ceramic shards testify to the ancient city of Sikinos.

The Ministry of Culture has declared post-Byzantine churches to be monuments in the Cyclades. On Sikinos there are seven other churches in addition to the main church Timios Stavros (Τιμίου Σταυρού, Μητρόπολις) and the monastery Zoodochos Pigi (Μονή Ζωοδόχου Πηγής).

The fortress-like Marian monastery Zoodochos Pigi (Μονή Ζωοδόχου Πηγής, life-giving source '), also called Chrysopigi, is about 300 m higher east of Kastro . Abandoned in 1834, the monastery was founded in 1690 and once offered protection from pirate attacks.

The small Byzantine Museum (Βυζαντινό μουσείο) is located on the main square of Chora. Late Byzantine icons of the island are shown, which are attributed to the Cretan school.

The Folklore Museum (Λαογραφικό μουσείο) is housed in a former oil mill in Chorio.

The Mavri Spilia (Μαύρη Σπηλιά 'Black Cave') is one of the largest caves in the Cyclades. The cave is located below the Chrysopigi monastery and can only be reached by boat

The port was not built until the 1980s. Until then, the goods and passengers were transferred to the ship with small boats. Until a few years ago, the paved road between Alopronia and Chora was the largest paved road in the Cyclades. Sikinos can only be reached by ferry, the island also has a helicopter landing pad .

The south and the area around the Eastern Cape are designated as Natura 2000 area Folegandros East to Sikinos West (Φολέγανδρος ανατολική μέχρι δυτική Σίκινο) GR 4220004 and at the same time as part of the IBA area ("Important Bird Area") GR 157 Ios, Sikinos , Folegandros Island Group .