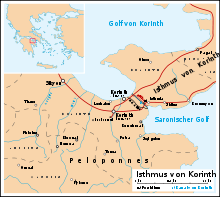 Map of the region around Corinth

Aerial view of the canal 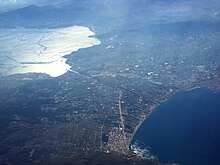 Aerial view of the canal region 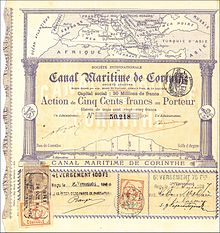 The Corinth Canal separates the Peloponnese peninsula from mainland Greece. It shortens the sea route by 325 kilometers.

For the 6343 m long canal , which was built between 1881 and 1893 , the Isthmus of Corinth, the Isthmus of Corinth , was dug through at its narrowest point. The construction of the canal was carried out under the supervision of the Hungarian engineers István Türr and Béla Gerster. In memory of the Hungarian builders, the two stone tablets on the canal are also inscribed in Hungarian. Since then, the Corinth Canal has connected the Saronic Gulf with the Gulf of Corinth . In order to create this possibility of passage and to save the ship traffic the 400 km long journey around the Peloponnese, up to 84 m deep was worked through rock. This resulted in a water depth of around 8 m. The canal bed is around 24.6 m wide at water level, but narrows to around 21 m down to the bottom, while the upper clear width of the cut in the terrain averages 75 m. The steep walls on the canal rise up to 79 m at an angle of 71 ° -77 °. At the altitude, five bridges cross the canal.

Noteworthy are the lowerable bridges at both ends of the canal. When a ship approaches, they are lowered into the canal by a motor-driven rod.

Destruction in 1944 and reconstruction

In 1944 the German Wehrmacht blew up part of the wall and all bridges over the canal. To make a later reconstruction more difficult, additional locomotives and railroad cars were thrown into the canal and mines were placed. Reconstruction began with the help of the United States Army Corps of Engineers in 1946 and was completed in November 1948. Several hundred thousand tons of rubble had to be removed.

While the canal brought enormous relief for seafaring at the time it was built, because it saved the dangerous bypassing of the Peloponnese around Cape Malea , it has since lost its importance. Reasons for this are:

Nevertheless, the volume of traffic in the canal is considerable. With relatively high transit fees (80 euros for private yachts up to 9 m in length ( Lüa ), every additional meter 23–27 euros (2012)) this dead-straight waterway is still used by around 30 ships a day, i.e. around 11,000 ships a year. The majority are ferries and tourist ships .

The idea of ​​a Corinth Canal goes back around 2,600 years. At the - traditional - beginning stands the tyrant Periander of Corinth . However, he never dared to try. Instead, in the 6th and 5th centuries BC A ship cart route , the so-called Diolkos , the possibility to avoid circumnavigating the peninsula.

Remains of Nero's canal project in 1881

In Roman times , the idea of ​​a canal connecting the Saronic with the Corinthian Gulf was revived. Plans were drawn up under Caesar , Caligula (37–41 AD), Nero (54–68 AD), and Hadrian (117–138 AD). While Caesar and Hadrian only had the first drafts, the actions of the other two Roman emperors continued:

The Greek writer Pausanias (around 115–180 AD) tells in his travelogue “Periégesis tes Hellados” about the attempts of the previous canal projects: “The isthmus at Corinth extends on one side to the great sea near [the ancient port city ] Kenchreai and on the other side to the [Corinthian] Gulf near [the ancient port] Lechaion . This makes the land in it the mainland. However, those who tried to make the Peloponnese an island have repeatedly stopped trying to dig through the isthmus. And in the places where they tried, their attempts are still visible. However, they never got to the actual rock, and so the land is still mainland as it is by nature. ”(Book 2, 1, 5 - free translation from the Greek original)

After the failed efforts of antiquity, it was only the Venetians who considered piercing the isthmus again to improve their opportunities as traders in Greek territory. However, they too gave up these plans in view of the rock masses to be overcome.

It was not until the 19th century, with his achievements of industrialization , in particular the invention of dynamite (1866) and explosive gelatine (1876) by Alfred Nobel, that the old dream of piercing the isthmus became possible. The banker Andreas Syngros donated a large part of the construction costs.

On April 8, 2010, Australian freestyle motocross rider Robbie Maddison jumped the Corinth Canal on his off-road motorcycle, a Honda CR 500. After accelerating his motorcycle to a speed of 125 km / h on a 400 m long run-up stretch, he catapulted himself over the 80 m lower canal using a ramp and landed safely on the landing hill 85 m away on the other side. The highest flight point was over 95 m. Hundreds of onlookers watched the spectacle.