This article or section needs to be revised: That something is wrong with this empty list is already shown by the different information: Introduction 1339, while the picture of the Doge's Palace claims that it has been the residence of the Doges since 1291.
Please help to improve it , and then remove this flag.

Coat of arms of the Republic of Genoa

The Doges of Genoa were the elected heads of state of the independent city ​​republic of Genoa in northern Italy.

Formally they were subordinate to the Roman-German emperors , but in fact they were often dependent on the French kings.

In 1339, the Doge Office was introduced in Genoa, modeled on the Doges of Venice . The first doge was Simone Boccanegra . Before that, Genoa had at first a dual power at the head of the state , then - like most other northern Italian cities - a temporarily elected Podestà and from 1099 a Capitano del popolo . Since the appointment of Simone Boccanegra in 1339, the doges were initially elected for life. Due to a constitutional change by the admiral and de facto ruler Andrea Doria (who never held the office of Doge himself), the term of office was limited to two years and his functions were henceforth only representative. The Doge Office of Genoa was finally abolished in 1805.

The following people were doges or governors of Genoa: 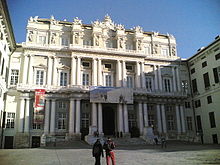 Palazzo Ducale (Genoa) , residence of the Doges from 1291 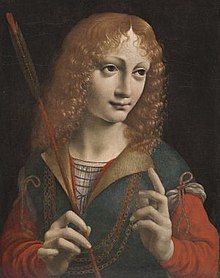