Bathsheba is a redirect to this article. For the asteroid, see (592) Bathsheba .

Bathsheba is the mother of King Solomon in the Jewish Tanakh (and in the Christian Old Testament of the Bible ) .

In 1 Chr 3,5  EU there is the name instead of the expected name Bathshebaבַּת־שׁוּעַ bat šûa ' . This is also a genitive connection, but with the other determinant שׁוּעַ šûa ' "Heil", so that the name can be translated as "daughter of salvation". The name was probably only a result of a text error from Bathsheba. Presumably, instead of בַּת־שֶׁבַע bat šæva ' בַּת־שֶׁוַע bat šæwa' was written and then vocalized in another way, namely בַּת־שׁובַּת־שׁ bat šûa ' .

According to the biblical narration in 2 Sam 11  EU , Bathsheba was the wife of the Hittite Uriah . Her father's name was Eliam, her grandfather Ahitofel (2 Sam 11.3; 23.34; Mt 1.6). While her husband, one of the highest officers of King David and a member of a special unit of the same (2 Sam 23:23:39), far from his house - during a campaign against the Ammonites - lay with the Israelite army before the besieged Rabba , King David saw Bathsheba while bathing and had her brought in to see her out of wedlock. 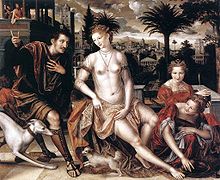 When David found out afterwards that Bathsheba had become pregnant by him , he had Uriah return to Jerusalem in the hope that Bathsheba would marry and recognize the child as his own later. However, Urija refused to go into his own house and sleep with his wife while the acts of war continued and the other soldiers were denied such privilege.

Thereupon David instructed his captain and general Joab, through a letter delivered by Uriah himself, to let Uriah die cunningly in battle. This is what the proverbial letter of Urias refers to . After the calculated death of the husband and the subsequent period of mourning, Bathsheba became David's eighth wife.

In the Old Testament, this narrative is immediately followed by the “punishment speech of Natan ” in 2 Sam 12  EU , in which the prophet rebukes David's actions and announces his punishment - the death of the newborn child.

1 Kings 1  EU reports on the enforcement of the claims to David's successor for her second son Solomon by Bathsheba .

Lucas Cranach the Elder made the material part of the Exemplum panels of Elector Joachim II.

The Venusian crater Bathsheba and the asteroid (592) Bathsheba are named after her.

Motifs of the Bathsheba story can be found in the German film Unter dir die Stadt (2010) by Christoph Hochhäusler.

Leonard Cohen condensed the Bathsebam motif in his song Hallelujah (1984).

The Norwegian writer Jo Nesbø uses the Urias motif in his third novel Rotkehlchen (including page 120 in Ullstein-Verlag, 1st edition 2001).