Trypanosomes ( Trypanosoma , Greek τρύπανον (trypanon) = the drill and σῶμα (soma) = body, body, i.e. drill body, the shape of a drill-like cell body) are a genus of single - celled flagellates that carry flagellates , which are parasites in various vertebrates of fish up to mammals and are mostly transmitted by insects . Most of the species are harmless. Nevertheless, infections with trypanosomes (known as trypanosomiasis ) are a significant medical problem in humans in Africa and Latin America: subspecies of Trypanosoma brucei are the pathogens of African sleeping sickness and Trypanosoma cruzi is the pathogen of Chagas disease . In addition, trypanosome infections are of great economic importance in various farm animals in tropical and subtropical countries; important animal diseases caused by trypanosomes are the nagana and the surra .

The first representative of the genus was described in 1843 by the Hungarian doctor David Gruby (1810–1898), who observed Trypanosoma sanguinis in the blood of a frog. The generic name Trypanosoma. is made up of the Greek word tryp-. (pierce, perforate) and the noun soma. (Body) and refers to the elongated, twisted shape of the cells, similar to a drill or corkscrew, and their way of locomotion. After the trypanosomes were considered harmless parasites for a few decades, the British veterinarian Griffith Evans (1835–1935) succeeded in 1880 in identifying trypanosomes as the cause of the surra , soon followed by David Bruce's discovery of the nagana pathogen . The parasites which are pathogenic to humans were not described until the beginning of the 20th century. 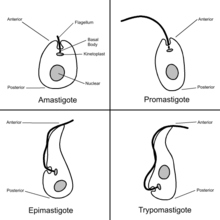 The mostly slender cells can be up to 80 µm long, depending on the species, and the parasites that infect fish are particularly large. In the case of the most important pathogens among the trypanosomes, the cells are at most 30 to 40 µm long. The protozoa have a kinetoplast typical for the kinetoplastea , a pronounced accumulation of deoxyribonucleic acid in a mitochondrion . Trypanosomes have a single flagellum with no mastigonema . The flagellum lies against the cell surface and forms an undulating membrane with it. Many trypanosomes change their shape during the life cycle, the position of the flagella in relation to the cell nucleus and the length of the cell itself vary .

One can therefore differentiate between several forms:

Promastigote forms in which the flagella emerge at the front end of the cell do not occur in the genus Trypanosoma .

Trypanosomes occur worldwide. Each species has a limited range of intermediate hosts , so they can only exist in areas where this intermediate host is found. One example is the “tsetse belt” in Africa at Trypanosoma brucei ; this parasite is only found in the distribution area of ​​the tsetse flies . Trypanosomes that cause disease in humans are practically only found in sub-Saharan Africa and Latin America.

There are trypanosomes that infect land-living mammals , reptiles or birds , but also parasites that attack amphibians or fish that live in freshwater or sea . In the case of parasites of land-living animals, insects are usually responsible for the transmission: important vectors for the pathogens in humans and farm animals are predatory bugs , tsetse flies and horseflies ; Trypanosomes affecting various rodents are thought to be transmitted by fleas , while black flies and louse flies are the vectors in birds . In fish and amphibians, leeches take on this role.

All trypanosomes are parasitic and undergo host switching between an invertebrate vector and a vertebrate host . In the invertebrate vector, there is often, but not all, multiplication; some species such as Trypanosoma evansi are only transmitted mechanically by insects without reproduction, Trypanosoma equiperdum entirely without an insect host during mating from horse to horse. As a rule, the forms developing in the intestinal tract of the insect are epimastigote, while trypomastigote forms in the vertebrate host. In vertebrates, the parasites live in body fluids such as blood , lymph or the cerebrospinal fluid . Some species, such as Trypanosoma cruzi , multiply as an amastigote form inside host cells in order to evade the activity of the vertebrate host's immune system . Other trypanosomes such as Trypanosoma brucei have developed sophisticated mechanisms of antigen variability, in which the variable surface glycoproteins of the cell envelope are frequently exchanged in order to evade the host's acquired immunity .

Trypanosomes have been studied for decades because of their medical importance. Particularly in gene expression, some peculiarities were discovered that are unusual for eukaryotes . Many genes are transcribed as a polycistronic transcript . The control of gene expression is primarily carried out post- transcriptionally via mRNA stabilization and degradation. The polycistronic transcript is trans-spliced into a monocistronic mRNA, which can be translated to corresponding proteins . Trans-splicing was first observed in trypanosomes. The complete genome sequence of several types of trypanosomes has now been determined.

It is likely that the genus Trypanosoma is monophyletic ; however, due to divergent results from sequence comparisons of ribosomal nucleic acids and different protein families, this is not without controversy.

Several hundred species have been described in the genus Trypanosoma . The genus was divided into two large groups with no taxonomic rank: the sterocoraria, which reproduce in the insect's posterior intestine and are spread through infectious feces, and the salivaria, which are transmitted by the insect through a bite when sucking blood . These groups were further subdivided into a total of seven sub-genera based on their shape and life cycle.

Among the currently recognized species, the following have medical or veterinary significance:

Sequence analyzes confirmed the distinction between the predominantly American trypanosomes of the subgenus Schizotrypanum and the predominantly African trypanosomes of the Salivaria group, but also identified other clades , including a rodent-infecting clade, a bird-infecting clade and an aquatic clade that infects fish and amphibians. The currently valid taxonomy does not yet take these results into account; several sub-genera are to be regarded as paraphyletic .