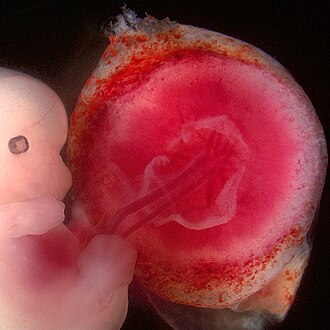 Under embryogenesis (from ancient Greek ἔμβρυον embryon , German , unborn fetus ' and γένεσις genesis , German 'development' , 'Origin') or embryonic development is that phase understood the nuclei development of the fertilized egg ( zygote ) via cleavage , Blastulation , gastrulation and Neurulation leads to the formation of the organ systems ( organogenesis ). This leads to a significant change in the external shape of the embryoblast and embryo . This period is also called the embryonic period .

1. Germ stage:
In the higher mammals ( placentalia ), to which humans also belong, the very first embryonic development phase starting with the fertilized egg cell ( zygote ) up to the formation of the germinal vesicle ( blastocyst ) is called the germ stage . During the germinal stage , the zygote migrates through the fallopian tube into the uterus . In the development stage of the blastocyst, it then nests in the uterine lining on the 5th to 6th day of development .

3. Fetal period:
The time from the beginning of the third month pc is referred to in medicine as the fetal period. Further development ( fetogenesis ) is characterized by rapid growth and increasing differentiation of tissues and organs .

Research into embryogenesis is the task of embryology . 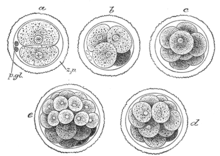 After fertilization, the nuclei of both germ cells fuse into one ( karyogamy ), which divides mitotically before the zygote divides. The daughter cells resulting from the division remain in close contact with each other and divide again. The 2-cell stage after the first division is followed by the 4-cell stage after the second division step, and after another the 8-cell stage. These first division steps follow one another quickly and run synchronously; they are called furrows and lead to cell proliferation without increasing the total volume. As the number increases, the size of the cells therefore decreases; This creates a compact spherical structure of similar size to the zygote, but which consists of many cells, the germinal parts or blastomeres . It is known as the mulberry germ or morula and has up to 32 blastomeres on the 4th day.

Within the morula there are soon cells without contact with the surface, which are therefore surrounded by an outer layer of cells. In the following development, there is a differentiation according to the location: the inner cell layer becomes the embryoblast , from which the actual embryo also emerges, the outer one becomes the trophoblast , which anchors and supplies the germ in the mucous membrane of the uterus by attaching the later Placenta . This distinction becomes clear with the uptake of fluid, which collects and thus forms a cavity in the germ, which is now referred to as the bladder germ or blastocyst .

As nidation or implantation is the process in which the embryo descends into the womb, usually at the 5th-6th Day after fertilization.

In the second week the chorion grows together with the placenta .

Embryogenesis is understood to be that phase of germ development which leads from gastrulation to the formation of the organ structures (organogenesis) and which causes a significant change in the external shape of the embryoblast and embryo. This period is also known as the embryonic period. In humans, it lasts from the third to the eighth week of development ( pc ).

Early embryogenesis (in humans in the third week of development) is the period when the embryo develops fastest. Its axes are determined by the formation of the primitive stripe. Gastrulation creates the three cotyledons from which all tissue in the embryo emerges.

In the next step, the neural tube is folded (beginning of neurulation ) and each organ system is roughly laid out, which then continues in the following period of embryogenesis.

Formation of the primitive streak

On the 15th day of development, a thickening of the cells can be seen in the middle of the epiblast - the primitive stripe . This ribbon-like structure allows a spatial axis termination for the first time: the longitudinal axis is determined. It begins caudally at the end of the primitive stripe close to the sticky stem. In the latter direction, the primitive stripe also continues to grow in length.

The sagittal axis is determined by the dorsally located epiblasts and the ventrally located hypoblasts . After defining these two axes, it is easy to define the final axis. If one imagines the median plane , which is spanned by the axes mentioned above, and runs exactly through the middle of the primitive stripe, one can easily find the transverse axes. They are the orthogonal (perpendicular) axes to the median plane. For the first time one can speak of right and left in the embryo.

The primitive knot is at the cranial end of the primitive stripe. Its cells ensure the growth of the head extension in the cranial direction. This growth is stopped by the prechordal plate.

After the fourth week of development, the primitive streak disappears almost completely.

Gastrulation (from the Greek gaster "stomach") is understood as the transition from two-leaved embryoblasts to three-leaved ones. The epiblast cells of the median plane fold ventrally and then migrate laterally between the hypoblast and epiblast. This is how the embryonic mesoblast is created. Its cells penetrate the hypoblast and displace it laterally. After this immigration, a differentiation is made between the ectoderm (former epiblast), mesoderm (former mesoblast) and endoderm (instead of the hypoblast; former hypoblast).

The ectoderm forms an epithelial-like layer of cylindrical cells and the endoderm a layer of small, polygonal cells. In two places the embryo consists only of the ectoderm and endoderm, so the mesoderm is missing here. This is the prechordal plate , which will later differentiate into the pharynx membrane, and the cloacal membrane .

Development of the notochord

The primitive pit located at the primitive node forms the chordal canal by stretching cranially into the head process. The median cell cord from the extension of the head fuses with the endoderm and thus forms the notochord. When fusing, openings are created that connect the yolk sac with the amniotic cavity ( neurenteric canal ).

Folding of the neural tube (neurulation)

In the further course of embryogenesis - in humans in the fourth to eighth week of development - there is a very large variety of differentiations in the tissue that initially only the most important building blocks of organogenesis are shown.

These uterine segments are not to be equated with the vertebral bodies of adult humans. The latter arise exactly between two somites. There are 4 occipital, 8 cervical, 12 thoracic, 5 lumbar, 5 sacral and approx. 8 coczygeal pairs of somites.

In the main phase of organogenesis, many organs are created by bending motion. Cranio-caudal curvature of the embryo is caused by the rapid growth of the neural tube. It enables z. B. the formation of the pericardial cavity (see heart # development ). When somites develop, bilateral curvature occurs. This movement leads to the closure of the neural tube, the notochord, the intestine and the abdominal cavity.

All vertebrates develop gill arches during embryonic development . However, these have undergone a change in their function and should therefore be better called pharyngeal arches.

The lower jaw and the masticatory muscles develop from the pharyngeal arches .

From the 9th week (with the beginning of the third month of pregnancy pc ) fetogenesis begins as a stage in the development of the organs ( morphogenesis ) and the differentiation of the tissues ( histogenesis ). A human figure can then be clearly recognized and the organs gradually begin to function.