This article is about the animal. For the communication protocol, see signal protocol .

The axolotl ( Ambystoma mexicanum ) is a aquatil living Mexican salamander from the family of cross-tooth newts (Ambystomatidae) which naturally only as a permanent larva occurs. Axolotl reach sexual maturity without changing their outer larval shape and undergoing a metamorphosis that is otherwise common in amphibians .

The common name Axolotl comes from the Aztec Nahuatl : āxōlōtl [aː'ʃoːloːt͡ɬ] is derived from atl (water) and Xolotl (an Aztec god) and means something like "water monster ".

In August 1804, Alexander von Humboldt was the first to bring axolotls to Europe, which served as exotic curiosities in the Paris Natural History Museum . 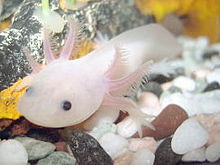 A leucistic axolotl: basic color as in albinos, eyes black as usual

Sexually mature axolotls are stout and usually have a total length of 23 to 28 centimeters, more rarely over 30 centimeters (some animals over 40 centimeters are reported). They have a strong, laterally flattened oar tail with fin edges that continue far forward. Rib furrows are clearly pronounced on the flanks. The limbs are quite short but strong. On both sides of the flat, broad head there are three outer gill branches and, behind them, gill slits covered with cartilage teeth . The wide mouth is below, the snout is rounded and the small lidless eyes are set wide apart.

The sexes can primarily be differentiated on the basis of the cloaca region : In adult males, the cloaca is slightly arched, whereas in females it is flatter.

The usual wild color of the animals is dark gray or marbled brown, slightly lighter on the abdomen. In addition, many color varieties were bred in the aquarium hobby, including leucistic and albino-type . Other transverse newts, namely Ambystoma tigrinum , were also crossed in some cases . Axolotls have a life expectancy of up to 20 years under good conditions.

Axolotl are endemic in Xochimilco -See and neighboring Chalco lake within a volcanic basin in Mexico City home. These lakes are remnants of an extensive water system, some of which are now only channel-like. The species has now disappeared from most of the original area, such as the (former) Texcoco Lake and Zumpango Lake. The animals are nocturnal, prefer cool, oxygen-rich fresh water and stay at the bottom of the water. In 2013, Xochimilco was found to have a population of 0.3 axolotls per square kilometer.

A special feature that the axolotl has in common with the olm and some other so-called obligatory pedomorphic amphibians is that they do not undergo metamorphosis , but spend their entire life in the water as gill breathers. Nevertheless, they reach sexual maturity. This phenomenon is called neoteny . Cause of neotenen development of the axolotl is an evolutionarily acquired alteration in the thyroid function : The responsible for the metamorphosis of amphibians most hormones are not distributed with the Axolotl. By artificial administration of the thyroid hormone thyroxine , the metamorphosis to a terrestrial , lung-breathing cross-tooth newt can nevertheless be experimentally brought about.

The development of the axolotl into a lifelong fully aquatic amphibian was possible because its living waters did not dry out and the metamorphosis did not offer any survival advantages for the individuals of the species (compare grotto olm ).

Axolotls have the ability to restore limbs, organs, and even parts of the brain and heart . The regenerates are usually not cripples, but complete and functional. After an injury, a wound epithelium forms, which also causes the underlying tissue to heal. After a few days, lost body parts form a kind of regeneration bud from which the body part grows back.

The ability to regenerate makes the species a worthwhile research object. The mechanisms that enable such regeneration are examined, e.g. B. the enzyme LOXe . It was previously assumed that after an injury, the surrounding cells would initially regress into particularly variable, pluripotent stem cells and, in the next step, all new cells would emerge from these. Recent research has shown that limbs or organs regenerate from cells that can only develop into certain types of tissue. (For this research approach, see also: Strudelworms ). The regeneration takes place in a timed sequence. The genome of the axolotl was sequenced to investigate the genetic causes of the regenerative capacity . It was found that the axolotl lacks the Pax3 , in contrast to other salamanders. Its function is taken over by Pax7 . At 32 billion base pairs, it is ten times the size of the human genome and the largest genome that has been deciphered to date.

Axolotl become sexually mature at around 8 to 15 months. In the natural habitat, the mating season is in February, when the snow melts in the mountains and cool condensation temporarily lowers the water temperature of the home lakes. In aquariums, reproduction can also occur at other times.

Spawn of the axolotl

The male's courtship is a type of dance: while the erect tail often makes rapid, winding movements, the body is bent. One or more spermatophore (s) are then deposited on the floor. The female takes this up with her cloaca . Spawning takes place a few hours later . The eggs are preferably attached to the leaves of aquatic plants. A clutch consists of around 80 to 800 eggs.

The larvae hatch, depending on the temperature, after about 15 to 20 days of embryonic development. First they feed on their yolk supply for two days before they go in search of food on their own.

Wild axolotls feed on crustaceans , other aquatic invertebrates (e.g. insect larvae), small fish and the spawn as well as juveniles of other amphibians. The offspring of their own species are also part of their food spectrum.

While the animals are threatened with extinction in their native Mexico, they have been kept as laboratory and domestic animals in the rest of the world since the 19th century. If kept in an aquarium , there should be no socialization with other species, but only with other species of roughly the same size. A cohesion with fish is to be avoided, fodder fish are possible. In captivity, axolotl can mainly be fed live food such as small fish, snails, river fleas, house crabs, wood lice, earthworms and mosquito larvae. Special pellets are also given as a substitute. Ornamental fish such as guppies and zebrafish are also possible as food. Feeding should take place in subdued light, as axolotl are crepuscular and nocturnal. 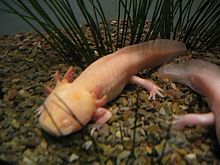 Albinotic axolotl in the aquarium

Axolotl are amphibians that live purely underwater. In order to keep these tail amphibians as optimal as possible, the water temperature should be on average 15 to a maximum of 21 ° C (optimal is 17 ° C), as higher ambient temperatures can destabilize the animals' immune system. A reduced winter temperature is not necessary in the aquarium. Diseased axolotl, however, recover faster if the water is cooled to 6 to 8 ° C for some time, which is roughly the winter temperature of their home lakes. Axolotl tolerate temperature fluctuations, but should not be exposed to them permanently. They live mainly on the pool floor, which must be taken into account when setting up the aquarium. For three adult animals, the aquarium should have a minimum size of 80 by 40 centimeters and should preferably be filtered with an air-operated Hamburg mat filter (HMF). Hard tap water with a pH value of 7 to 8.5 is suitable for keeping. Soft rain or pool water, however, should not be used.

Aquarium axolotl come exclusively from offspring, as taking them from their home lakes is now strictly prohibited. The relatively large spawn of a female is mostly consumed by conspecifics. It is therefore recommended that a number of eggs be removed and kept separately for breeding. The hatched larvae are initially fed up to a size of 20 millimeters with brine shrimp , small daphnia or cyclops . In captivity, the species reaches an age of around 12 to 20 years, and individual cases of older ages up to 28 years are known.

A number of parasites occur in the axolotl, whereby the parasite fauna can differ significantly between wild animals and animals from captivity. Thus, helminths with an obligatory change of host such as Hedruris siredonis , Megalobatrachonema elongata or Chabaudgolvania spp. does not appear in captivity because of the lack of necessary intermediate hosts. A problem in diagnostics are pseudoparasites or intestinal passers-by that do not cause disease. Samples are often contaminated with non-parasitic protozoa , rotifers or vortex worms .

Arthropod infestation is rare. The carp louse and other members of the Argulus genus feed on blood and tissue fluid, can cause local inflammation and transmit diseases. These parasites usually leave the host when they are removed from the aquarium and they can therefore be controlled separately. Representatives of the cancer genus Lernea ("anchor worms"), on the other hand, anchor themselves firmly and deeply in the tissue and can only be removed mechanically with loss of substance. Gill shrimp parasitizing on the gills such as Ergasilus Sieboldi and other members of the genus cause inflammation and tissue breakdown .

Eyelashes are common ectoparasites in the axolotl. Diseases occur primarily through mass infestation in weakened animals. Here, skin discolouration, deposits, cloudiness and molting attacks dominate. General disorders with fatigue and reluctance to eat can also occur. Mobile eyelash animals, especially representatives of the genus Trichodina , are more common , and Tetrahymena and Chilodonella spp. on. In addition, sessile ciliate animals can be found on eggs, larvae, skin, cloaca or gills. Representatives of the genera Vorticella ("bell animals"), Carchesium and column bells ( Epistylis ) occur here. The sessile ciliates show up as cotton wool-like coverings, which is often mistaken for a fungal infection. A mass infestation can cause bloody or tissue-destroying inflammation of the skin and gills.

Flagellates such as Spironucleus elegans play a role primarily as endoparasites of the large intestine and the urinary tract. Carotomorpha are large and small intestine parasites that occur primarily in animals weakened by other diseases. Ectoparasitic flagellates usually occur when there is overstocking and poor water quality. They mostly belong to the genus Ichthyobodo and cause mucus deposits, coverings and peeling of the skin.

Ichthyosporea are relatively common in axolotl, especially Amphibiocystidium ssp. They cause vesicles that can unite and burst, and knot-like growths. In contrast to frogs, these changes do not heal in the axolotl, and no treatment is known.

Axolotl are much more common today in captivity than in their original habitat. The natural habitat is heavily polluted due to the growth of the Mexico City agglomeration . Efforts to improve the water quality there have so far not led to any recovery. The drainage of lakes and wetlands, the construction of dams and the release of alien fish species ( tilapia , carp ) pose a considerable threat to the natural axolotl population.

Since 2006, the IUCN has classified the axolotl in its Red List in the highest endangerment category, critically endangered (threatened with extinction). Estimates from 2009 put the wild population at only 700 to a maximum of 1200 individuals who exist in six different locations within the Xochimilco wetland. According to a press report from January 2014, no free-living axolotl could be found despite a four-month search.

In the Washington Convention on the Protection of Species , the species is listed in Appendix II, in EC Regulation 318/2008 in Appendix B.

Axolotl in Mesoamerican and Japanese cultures

The axolotl was fished by the Mesoamerican natives and considered a delicacy. The Aztecs saw it as a sacred animal, and yet it was a common treat at banquets. Even today, illegally caught axolotl occasionally find their way onto local markets and are offered for consumption.

In Japan, the axolotl became popular in the 1985s through an advertising campaign by Nisshin , an instant noodle maker. Breeding specimens are now also offered fried as a culinary specialty under the name Wooper Looper .