The title of this article is ambiguous. Further meanings are listed under Suez (disambiguation) . 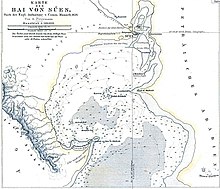 Sues [ˈzuːɛs] (English / French transcription: Suez , Arabicالسويس, High Arabic as-Suwais , pronounced in Egyptian es-Swēs ) is a city in Egypt at the northern tip of the Red Sea , which runs out into the Gulf of Suez , at the mouth of the Suez Canal .

Suez is located 135 km east of the Egyptian capital Cairo . The city has 728,180 inhabitants (as of 2017). The city consists of the Arab quarter and the regularly laid out European quarter with a viceroyalty villa. To the southeast of the old town, new, modern quarters have emerged that are built on the former seabed .

In the northeast is the mouth of the here 2 m above sea level. M. lying fresh water channel ( Ismailia channel) with a large lock mechanism. A 3 km long dam leads to the port facilities, which are built far out into the sea; on this the railway runs to the harbor basin, called Port Ibrahim , with the lighthouse and the statue of Lieutenant Waghorn .

Sue's probably stands on the site of the old enema , from the Arabs Qulzum called. Before the discovery of the sea route to India around the Cape of Good Hope, it was known as a major transshipment point for European and Indian goods, but then fell into disrepair and had only 1500 inhabitants when the canal construction began. After the Suez Canal was completed (1869), the city flourished again. Its importance as a port of passage for the East Asian trade and passenger traffic (especially to Mecca ) helped the economy to achieve an enormous upswing.

During the six-day war with Israel in 1967 , the city was evacuated and badly damaged. Some of the damage can still be seen. During the 2011 revolution in Egypt , the city of Suez was marked by particularly severe clashes between demonstrators and security forces.

The main sources of income are the petroleum refining , petrochemical and iron processing industries . Some artificial fertilizer factories have also settled here.

Suez is the seat of part of the Suez Canal University .

The National Museum of Suez reopened in a modern new building in 2012, long after the previous building was destroyed in the Egyptian-Israeli Six Day War in June 1967. The collection was moved to Cairo in good time. Now it can be seen again in the new building - together with other important works from the Pharonic period, Hellenistic-Roman antiquity, the Middle Ages and modern times.