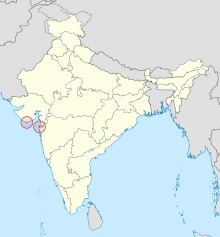 Location of Daman and Diu in India

Daman and Diu ( Gujarati : દમણ અને દીવ Damaṇ ane Dīv , English : Daman and Diu , Portuguese : Damão e Diu ) was a union territory in India . It consisted of the two unconnected areas of Daman and Diu , both of which are on the west coast of India and border the state of Gujarat . The union territory had around 240,000 inhabitants on an area of ​​approx. 111 km². The capital was Daman .

The Union Territory of Daman and Diu consisted of the two unrelated areas of Daman and Diu . Both are located in western India on the coast of the Arabian Sea, around 200 km as the crow flies. Daman is located at the entrance of the Gulf of Khambhat at the mouth of the Damanganga River , Diu on an island off the Kathiawar peninsula . Both Daman and Diu are surrounded by Gujarat State territory . Diu borders the Junagadh district , Daman borders the Valsad Gujarats district. Only around 20 km inland from Daman, but separated by a strip of land belonging to Gujarat, is the district of Dadra and Nagar Haveli , also a former Portuguese colony, which was an independent union territory before it was merged with Daman and Diu.

Daman and Diu has a total area of ​​approx. 111 km². Of this, about 72 km² are in Daman and just under 39 km² in Diu. The only two cities are the eponymous places Daman and Diu.

According to the Indian census, the union territory of Daman and Diu had a total of 242,911 inhabitants in 2011. The Union territory is heavily urbanized: 75.2% of the population live in cities. The population density is correspondingly high with 2,169 inhabitants per square kilometer. The population growth of Damans and Dius is significantly higher than in the surrounding areas, which is mainly explained by immigration from other areas of India. Between 2001 and 2011, the population of the Union Territory increased by 53.5%. The immigration of (predominantly male) labor migrants also explains the extremely unbalanced gender ratio: In Daman and Diu there are only 618 women for every 1,000 men. Daman and Diu thus recorded the largest surplus of men of all Indian states and Union territories. The Damans and Dius literacy rate is 87.1%, well above the overall Indian average of 74.0%.

As in the surrounding Gujarat, the main language Damans and Dius is Gujarati . It is spoken as a mother tongue by 69 percent of the population of the Union Territory. Among the immigrant population, Hindi (20 percent), Marathi (4 percent), and a number of other languages, which make up 7 percent in total, are spoken. As in all of India, English plays an important role as a lingua franca and educational language. Portuguese , which used to be widespread , has lost its importance since the end of the colonial era. The two Creole languages with Portuguese-based vocabulary, Língua da Casa (Daman) and Língua dos Velhos (Diu), are in extinction . These languages ​​were mainly spoken among the Christian population of the area.

Hindus make up the vast majority of the residents of Daman and Diu with 91 percent (2011 census). The Muslim minority makes up 8 percent of the population. Despite the historically strong Christian character from the Portuguese colonial era, Christians today are only a small minority at just over 1 percent.

Both Daman and Diu live to a large extent from fishing and tourism. In contrast to neighboring Gujarat, there is no alcohol ban in either area . In addition, both territories have beautiful sandy beaches. 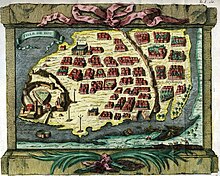 At the time of Indian independence in 1947, Portuguese India still consisted of Goa , Daman and Diu as well as Dadra and Nagar Haveli , which belonged to Daman as an exclave until the Indian nationalists came to power in 1954 . In 1961, India annexed the remaining Portuguese possessions in a military operation. The following year, the Union Territory of Goa, Daman and Diu was formed from them . Portugal did not recognize the annexation until 1974 after the fall of the dictatorship in the Carnation Revolution . Daman and Diu became union territory in 1987 when Goa was taken out of the federal territories as an independent federal state. In 2020 it was merged with the Union Territory of Dadra and Nagar Haveli.

In both territories, the flair of the colonial era has been preserved, which is particularly reflected in the regular street scene and also in the large church buildings.