The Broadway [ bɹɑːdweɪ ] is a main and commercial street in York New districts Manhattan and Bronx , also the oldest and with more than 25 kilometers, the longest north-south crossing of Manhattan. This road partly comes from an old Indian path that the first Dutch settlers took over and turned it into a road. The southern end of Broadway is on Bowling Green near the southern tip of Manhattan. It leads across the island to the northernmost tip, where it crosses the Harlem River by means of the Broadway Bridge , continues through the Bronx and into Westchester County , along the Hudson River , until it finally reaches the north of Sleepy Hollow after a total length of about 50 km becomes Albany Post Road and takes US Highway 9 to Albany , the capital of New York State .

When the first Dutch settlers settled on the island and founded New Amsterdam , they took over - in contrast to the English, who tended to use their previous principle of English town planning when building their settlements - this already existing Indian path to go from New Amsterdam in the south the island to get to other locations in the north.

Its route differs greatly from the uniform street grid of the Randel Plan , which was designed later and which, like other large American cities, continued the island development as a planned city . 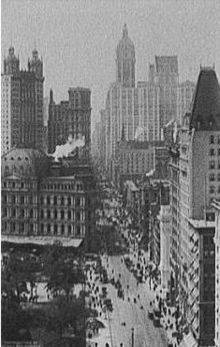 Long before the first Europeans set foot on the island of Manhattan (origin of the name from the Delawaren language ), the Indians living there had already pounded paths into the wooded wilderness. The most important of these was named Wickquasgeck Trail, after one of the sub-tribes of the Delawars who inhabited the southern Hudson region. He crossed the island from north to south around swamps and rocky elevations.

The Dutch explorer David de Vries first mentioned this path in writing when he wrote in 1642: "[...] the Wickquasgeck path, which the Indians pass every day" . The Dutch widened the southern part of the path and built it into a paved road, which they called “Heere Straat” (Herrenstraße) or “Breede Weg” (wide path). In 1677 it received the English translation of Broadway for a section, which was only introduced in 1804 for the entire course of the street. Despite its name, at 22 meters wide, it is not the widest street in New York.

The course of today's Broadway no longer corresponds exactly to the original path or that of the Dutch street. Broadway still has its original course up to 23rd Street . But where today Broadway leads north, diagonally through the rectangular grid of the remaining streets and then on the west side of the island in a north-easterly direction, the path that the Indians and later the Dutch followed ran up the east side of the island, and only about at the height of today's northeast corner of Central Park , he took a north direction and followed the line that corresponds to St. Nicholas Avenue today. In the area around Washington Heights , the original path and today's Broadway meet again and lead to the mainland, into today's Bronx .

Internationally known Broadway is also available for now around the Times Square -based Theater District .

Since May 2009, on the initiative of Mayor Michael Bloomberg, parts of Broadway have been turned into a pedestrian zone ; the Danish architect Jan Gehl was involved in the planning and implementation . In the approximately 500 meter long area between 42nd and 47th Street , which also includes Times Square , and between 33rd and 35th Street , cars were initially prohibited from driving until September 2009. After the number of accidents with pedestrians had decreased significantly, this regulation became permanently valid. The plan initially encountered resistance from taxi drivers and suppliers. 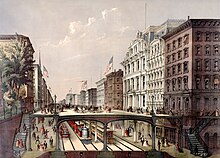 Plans for raising the street level by one floor to cope with traffic and pedestrian congestion, 1868.

Assuming you consider the bowling green as the starting point of Broadway, today's street begins at the southern end of Manhattan Island in the so-called Downtown , the "old town" of New York. Today's starting point was originally much closer to the coast, but due to several land reclamation actions (e.g. by pouring leftover excavation from the building of houses into the water), the coastline of Lower Manhattan has steadily moved a little further into the sea, so that Broadway starts a long way from the water.

A few blocks to the northeast, Broadway passes Trinity Church and City Hall Park . This section from the south end to the town hall is traditionally the route of the so-called "ticker-tape parades" , which in the past are organized much more often than today for special occasions and personalities (e.g. after the New York Yankees won the World Series 2000). Between the office buildings in the financial district , in the immediate vicinity of the then World Trade Center and today's Ground Zero , is the oldest church in the USA still in use, St. Paul's Chapel , which survived several city fires and the collapse of the twin towers.

West of Broadway, up to Canal Street , was the upscale residential area of ​​New York until around 1825. Land reclamation has also significantly increased the area here, and the banks of the Hudson River are now well behind Tribeca and Battery Park City . Between Canal Street and Houston Street is the SoHo district , which is now the district of designer boutiques and art galleries and is still very reminiscent of the earlier textile mills, department stores and commercial buildings built in the late 19th century with glass and cast iron facades ( Italianate style ) were ( Cast-Iron Historic District ). Broadway here is also lined with many shops that are specially designed to serve as shopping opportunities for tourists, who are numerous there.

Broadway marks the eastern border of Greenwich Village (also known as West Village ) and at the same time the western border of East Village and runs not far from Washington Square Park between New York University in the west and Astor Place and St. Mark's Place (or 8th Street ) through to the east. Six blocks further north, at Union Square , Broadway begins to impact north, where, contrary to the Commissioners' plan of 1811 , it is the only street at an angle through the rectangular grid of streets and streets that is otherwise applied to the whole of Manhattan (north of 14th Street ) Avenues runs through it. 14th Street is seen as the "border" between "Downtown" and " Midtown Manhattan ". 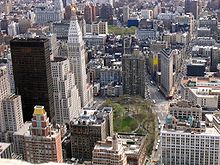 Intersection of Broadway and Fifth Avenue at night

Where Broadway and an avenue intersect, lively and bustling squares with small parks and architecturally interesting buildings emerged, such as the intersection of Broadway and 5th Avenue on 23rd Street ( Madison Square ), where Madison Square Park is located and the famous Flatiron Building .

Typical street scene on Broadway in Herald Square in front of the Macy’s department store : taxi yellow dominates. It is now a pedestrian zone with a street café .

On Herald Square , the intersection of 6th Avenue and Broadway at 34th Street , Macy’s is now the world 's largest department store, which occupies an entire block (from 6th to 7th Avenues between 34th and 35th Streets ). This is where Manhattan's theater district was originally located, until it was gradually replaced by Longacre Square, which is now known worldwide as Times Square . In Times Square, Broadway crosses the middle of the theater district , which is located between 41st and 53rd Street with its 38 theaters . The spectacular musical productions that are now commonly referred to as "Broadway plays" were named after him. Smaller theatrical productions used to be located a bit away from the expensive location on Broadway and were therefore given the name “ Off-Broadway ” (German: “away from Broadway”) - later common for every smaller theater, whether on Broadway or not .

The next intersection of Broadway and avenue is on 59th Street and 8th Avenue. This place is called Columbus Circle , named after the discoverer Christopher Columbus . Columbus Circle forms the southwest corner of Central Park . 8th Avenue, which runs in north-south direction, forms the western boundary of the park and is also called "Central Park West", 59th Street, the southern boundary of the park, is appropriately called "Central Park South". The newly built "Time Warner Center" is located at Columbus Circle, which houses the company headquarters of the Time Warner Company , several expensive luxury apartments and shops and concert halls of "Jazz at Lincoln Center". On the north side of the square is the "Trump International Hotel and Tower", one of the numerous skyscrapers owned by the building magnate Donald Trump with one of the most luxurious hotels in the USA.
From Columbus Circle in a northerly direction, Broadway is also passable in both directions, which is only possible in the direction of Downtown in the south . It is now bordered by a tree-covered green median, similar to Park Avenue.

A little further to the north, Broadway crosses Columbus Avenue (Lincoln Square) and, at 64th / 65th Street, also passes Lincoln Center , a district that is best known for the Metropolitan Opera and where, among other cultural institutions, the Juilliard School of Music is located. At the 71st Street is the intersection of Broadway and Amsterdam Avenue (Sherman Square, south of the intersection; Verdi Square, northern crossing..), In turn, with splendid buildings from the so-called " Gilded Age " (dt about. "Gilded Age ” , see “ Belle Epoque ” in Europe), including the former Ansonia Hotel on 73th Street.

As far as 107th Street, Broadway now runs relatively parallel to the other avenues through the more elegant Upper West Side , which is mainly characterized by large residential buildings and, due to its comparatively quiet location, is now a sought-after and therefore expensive residential area where people of the upper middle class live and the upper class.

From the junction with the Trans-Manhattan Expressway at 178th / 179th Street northbound, Broadway is designated US Highway 9.

In addition to Broadway in Manhattan, there is also a street called Broadway in each of the four other districts of New York: in the Bronx (the continuation of the old path or Broadway from Manhattan), in Queens , in Brooklyn and in Staten Iceland .