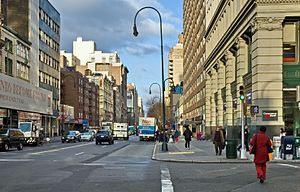 The 14th Street is a major street that cuts through New York City's borough Manhattan runs. The street competes with one of the city's famous avenues and is an important business location.

14th Street used to be an upscale area, but lost some of its glamor and prestige as the city grew northward. It marks the southern limit of the Commissioners' plan of 1811 , which specified the rectangular, numbered street grid of Manhattan from 14th Street to Washington Heights in the north. South of 14th Street, this grid continues almost continuously into the East Village - but not in Greenwich Village. An older and less uniform plan for the road grid was used here.

14th Street begins between 11th and 10th Avenues on the northern tip of Greenwich Village . West 14th Street then crosses Ninth Avenue , Hudson Street , Eighth Avenue , Seventh Avenue , Sixth Avenue or Avenue of the Americas and Fifth Avenue to the east . After Fifth Avenue, West 14th Street becomes East 14th Street and forms the southern border of Union Square between University Place and Fourth Avenue or Park Avenue . East of 4th Avenue, 14th Street forms the southern boundary of Irving Place , a street that runs in a north-south direction and ends at Gramercy Park. Then 14th Street crosses Third Avenue and becomes the border between the East Village in the south and Gramercy in the north. The street then crosses Second Avenue , where the Second Avenue Subway will soon be a subway station . Then 14th Street crosses the main thoroughfares of Alphabet City: 1st Avenue , Avenue A , Avenue B and Avenue C where 14th Street ends. 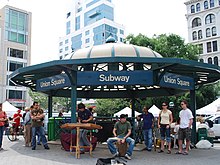 14th Street is very well connected to the New York subway network. Every line that crosses 14th Street also has a stop there:

The Port Authority Trans-Hudson (PATH) stops at the intersection of 14th Street and 6th Avenue.