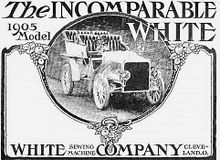 Advertisement for the White company from 1905 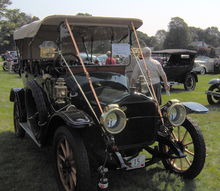 Thomas H. White and William L. Grout founded the White Sewing Machine Company in Cleveland , Ohio , in 1866 . They first made sewing machines. Another source states that the company was founded in Massachusetts during the Civil War (1861–1865) and moved to Cleveland after the war.

In 1900 the production of passenger cars was added. At first they were steam cars . Commercial vehicles were added in 1900 or 1901 .

In 1966 the company was renamed White Trucks, Division White Motor Corporation . The second location is now Dublin in Virginia . As of 1968, there was a subsidiary in Kelowna , Canada called White Truck Manufacturing .

In 1981 it was taken over by Volvo. This resulted in the name being changed to Volvo White Truck Corporation . Cleveland was no longer mentioned, but Greensboro in North Carolina was added to Dublin . The end came in 1988.

Source: Around 500 passenger cars with gasoline engines still exist, most of which are in the USA.