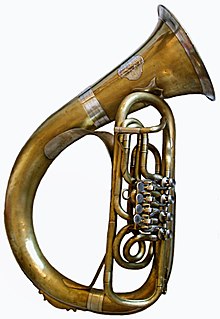 Helicopter tuba, made in Graz

The helicon , also known as the helicopter tuba , is a Central European brass instrument that is made in the pitches of the tuba . The Helikon, introduced in the 1840s, is a special model of the tuba with an approximately circular design so that it can be placed around the shoulder of the standing musician.

The name Helikon refers to the mountain Helikon in Greece, which occurs in Greek mythology as the seat of the muses . According to the shape of the instrument, the origin of the name was changed to the Greek word helikos , "winding" (cf. Helix ).

The first Helicon was made by Wilhelm Wieprecht in 1845 at Musikinstrumenten Stowasser in Vienna and patented in Austria in 1848 after Wieprecht had seen these round instruments possibly used by Russian military musicians.

The helicon, like the tuba, belongs to the bow-horn family because the length of the length is largely conical. The scale length is defined based on the opening angle of the bell and the opening length. Representatives of the opposing cylindrical length are z. B. Trumpet and Trombone .

The helicon is the forerunner of the sousaphone , the larger bell of which is detachable and is not guided sideways, as with the helicon, but over the player's head. You can play the helicon, tuba and sousaphone with a cup mouthpiece. Due to the design wrapped around the player, the helicon can be worn better than the tuba for equestrian and marching music. However, when sitting, the conventionally shaped tuba has advantages. The sonorophone introduced by the Metzler company in 1858 belongs to the same type of instrument.

Heliconist in the Swedish Army

If you want to take historical references into account in the instrumentation , it should be emphasized that the Helikon is preferable to the Sousaphone from the United States for Central European music. Historically, the Helikon remains the classic Central European marching tuba; it is still used by music groups with historical references such as the Baden “Gälfiäßler”. In southern and eastern Europe, the helicon continues to be a popular bass instrument. Helikons almost completely disappeared from the marching orchestras in the course of the 20th century, but they are still being built.

The Helicon is used in new folk music , an example to be mentioned is the group Kofelgschroa , in which Martin von Mücke plays a helicopter tuba, or the band LaBrassBanda , whose tuba player Stefan Huber performs with a helicopter tuba.

The Helikon (Indonesian strimbas ) is often part of the Tanjidor wind orchestra, which was introduced during the Dutch colonial era in the north of the Indonesian island of Java .