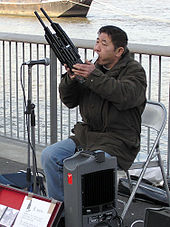 Sheng ( Chinese  笙 , pinyin shēng ) is a musical instrument used in traditional Chinese music . It belongs to the family of mouth organs , which in turn belong to the straight reed instruments. The sheng is considered to be the oldest forerunner of the harmonica instruments .

The sheng consists of a wind chamber, usually made of metal, with a beak and 17, sometimes 21 or 37 pipes. The ends of the pipes are in the wind chamber. This distinguishes the sheng from the lusheng played in southwest China and the Laotian khaen , whose pipes lead through the wind chamber. Traditionally, these were bamboo tubes, the mood was diatonic . In recent times, metal pipes and chromatic tunings have become increasingly common. The characteristic loud and piercing sound of the sheng is created by piercing metal tongues attached to the pipes as soon as the handle hole of the pipe is covered. You can play the sheng while inhaling as well as exhaling. As one of the few instruments in traditional Chinese music, it is capable of playing chords . 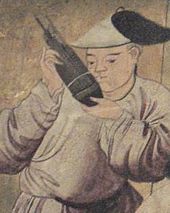 Sheng players at a funeral; Wallpaper, around 1780

At 3000 years old, the sheng is one of the oldest Chinese musical instruments. It is considered to be one of the most important instruments in classical Chinese music and is also used in the sacred environment. The oral organ also has its place in the legendary world of China: Many stories entwine around their origin and special meaning, such as the legend that a divine dispute could only be appeased by the harmonious sound of the Sheng.

In Japan there is a similar instrument called shō , which is a central component of Gagaku instrumental music . Sometimes the Sheng found its way into European compositions, for example with John Cage .

In the region, which includes the south of China, the north of Laos and Vietnam , there are several different types of simpler mouth organs, mostly made of bamboo, among the minority peoples. The most widespread mouth organ there is the khaen played in Laos and the Isan region of Thailand .

A Sheng player who combines classical Chinese music with contemporary sounds and musical attitudes (including jazz and new improvisational music ) is Wu Wei, who was born in Jiangsu Province in 1970 and lives in Germany .

Only a few of the originally numerous variants of the sheng have survived to the present day: