The Tungusic languages (also: Manchu-Tungusic languages ) are a language family of twelve relatively closely related languages ​​spoken by around 75,000 speakers in northern China , eastern Siberian areas of Russia and parts of Mongolia .

The hypothesis that Tungusian belongs to the Altaic languages , except in the context of a linguistic union , has almost only historical significance. 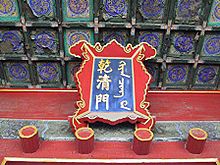 Most linguists assume that the Tungusic languages ​​originated in northeastern China . Juha Janhunen and Pevnov (2012) locate Manchuria and the Amur River as the original home of Tungusian . Some, on the other hand, suspect the original home southeast of Lake Baikal .

The number and naming of the individual languages ​​varies depending on the point of view of the respective scientist. The definition of relatively closely related variants (i.e. dialects) as languages ​​follows political guidelines in some cases. All Tungusic languages ​​are threatened with extinction or at least endangered.

The Ewenische (old name: "Lamutisch") is common in northeast Siberia in Yakutia and on the Kamchatka Peninsula.

The Evenk language is used in many parts of Siberia , some regions of Mongolia and in the extreme northeast of the People's Republic of China . It is the Tungusian in the strict sense. Evenk has many regional variants that are spoken by around 10 thousand people in Siberia, especially Sakhalin. In China, a distinction is made between three dialects of Evenki, “Solonic” with almost 20,000 speakers, “Bargu-Evenkish” with approx. 3,000 speakers and “Olguya-Evenkish” with approx. 150 speakers. Almost all speakers live in the administrative area of ​​the city of Hulun Buir in Inner Mongolia , only about 2,000 speakers of Solonic Evenkish live in neighboring Qiqihar in Heilongjiang Province . (Previously, these dialects of Evenk were considered separate languages.)

Linguistically, this group also includes Negidial, which is still spoken by around 200 people on the Amur lower reaches (geographically an Amur language).

In the regions on the lower reaches of the Amur (Chabarowsk Krai) belonging to Russia , the following Tungusic languages ​​are spoken: Nanai (Goldisch, Hezhenisch), Ultschisch, Orokisch, Orochisch and Udiheisch. The Negidial, which is also spoken on the Amur, linguistically belongs to the northern Tungus languages. Together they only have seven to eight thousand speakers.

In Manchuria , the Manchurian language (Manchu) is still spoken by fewer than 100 people in two villages . The vast majority of the more than 10 million Manchus in the People's Republic of China now speak variants of the Chinese language . The Manchurian language was one of the official languages ​​of the Tungus-Manchurian Qing dynasty (1644-1911). The Xibenische , which has evolved from the Manchurian is today in Xinjiang in Ili -type region, especially in Qapqal , disseminated (30,000 speakers).

In contrast to the other Tungus languages, the Southwest Tungus languages ​​have a high proportion of Korean loanwords, which indicates that Korean had an influence on the Jurchen and early Manchus.

The most widespread Tungusic written and literary language was Manchu , for which a script was created as the official language of the Chinese Manchu dynasty in the 17th century - based on Mongolian models - in which there is also a noteworthy literature.

The language of the forerunners of the Manchus, the Jurchen , was officially used in the northern Chinese Jin dynasty in its own script based on the script of the Proto-Mongolian Chitan . Their territory, like that of the Chinese Song Dynasty, was then conquered by the Mongols. Remnants of manuscripts and inscriptions have also been found in this language and individual words are passed down in Chinese chronicles from that time.

In 1931 Evenk, Evenk and Nana got the Latin script in the Soviet Union, shortly afterwards in 1936/37 they were written in Cyrillic.

The Xibe still use their own Xibe script, a slight modification of the Manchurian script.

In Russian, some Tungusic languages ​​- like many other Siberian languages ​​- were called "Tatar", without being closely related to the Turkic language known today as Tatar .

The following table offers a look at the word equations of the basic Tungus vocabulary. It shows that the Tungusic languages ​​are closely related, but also reveals the main groups in the north (Ewen-Ewenki-Negidal), south-east (Amur languages) and south-west (Manchu-Juchen).

The main typological characteristics of the Tungusic languages ​​are: