This article explains the musical instrument flageolet; other meanings under Flageolet (disambiguation) .

English type flageolet from around 1800 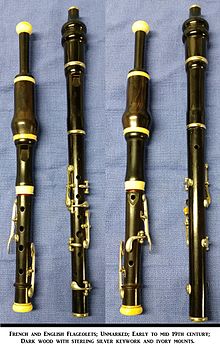 Two flageolets (front and back views); the one on the left is French and the one on the right is English. Both have flaps for easier operation of the complex sound system

French type flageolets of various sizes in the Musée de la Musique , Paris; the longer and rounder shaft can already be found here as a mouthpiece

The flageolet [ ˌflaʒoˈlɛt ] is an early woodwind instrument from the group of beaked flutes and is closely related to the recorder . The range is two octaves and three semitones; the instrument has a characteristic soft sound. It was invented in France at the end of the 16th century and was particularly present in the Baroque period, especially as a solo and leisure instrument. Some technical improvements were made around 1800, but after a late bloom in the 19th century, the flageolet was forgotten.

The term flageolet , used since the 13th century, is the diminutive of flageol ( old French for "flute") and initially meant "small flute" par excellence. In particular, it was used to describe the Catalan one-handed flute ; In the orchésography of 1589, a comparable instrument is described with the Larigot . In the 16th century, however, the word flageolet increasingly referred to a specific design common in Paris , the so-called French flageolet , which is said to have been invented in its well-known form by Sieur Juvigny in Paris in 1581. According to Charles Burney , he used it for the premiere of the famous Ballet comique de la reine that year, the first great court ballet in history.

The French shape has four finger holes on the front and two on the back; It can be used to play the unusual scale A, B, C, D, E, G, A. It is gripped with the thumb, index finger and middle finger of both hands. Marin Mersenne describes it in his work "Harmonie Universelle", gives a picture of the instrument and shows that there were already virtuosos at that time who achieved astonishing mastery on the instrument and were able to imitate the sounds of other instruments. In the first half of the 17th century, the most famous flageolettist was Le Vacher.

An important introduction to playing the flageolet appeared in 1682 under the title "Pleasant companion, or new lessons and instructions for the Flagelet by Thomas Greeting, Gent." It was published by John Playford and sold in his shop. The notation of the pieces printed therein consisted of six staves (for the individual holes); Holes to be closed were marked with a point on the respective line. In this epoch, the baroque era , the recorder and flageolet coexisted. The latter was usually - as the name suggests - the smaller variant. The author of the above-mentioned contemporary work also emphasizes that it is handy and can be taken anywhere. In 1700 Jean-Pierre Freillon-Poncein wrote another textbook with the title “La Véritable manière d'apprendre à jouer en perfection du haut-bois, de la flûte et du flageolet, avec les principes de la musique pour la voix et pour toutes sortes d'instruments "

In the late 18th century, the French design developed into the English flageolet with six finger holes on the front and no thumb holes on the back, which is tuned in D major . So basically it is a simplified form of the recorder. The "improved English flageolet", patented by William Bainbridge in 1803, also had a single thumb hole on the back. With the somewhat later production of this flute shape from sheet metal, today's Tin Whistle was created , which has now largely become established.

Originally, the flageolet had a beak-like mouthpiece that was flat and wide in shape. From the middle of the 18th century, however, people started to replace this mouthpiece with a slightly longer, round shaft ("beak") made of bone, mother-of-pearl, gold or ivory, which looks similar to that of recorders. However, the beak shape of the core column was able to hold for some time, so the old shape can still be found in many examples from the 19th century.

The mouthpiece of the instrument merges into a thickening in which, in the early flageolets, there was a sponge for absorbing condensation from the breath. This is no longer common today, but the pear shape of the headboard has been retained. This is followed by the incisal edge ("labium"), which the air blown into the instrument hits and thus generates a sound. The longest part of the instrument is usually the cylindrical resonance body , which has a narrow, tapered bore in the Flageolett. There are finger holes on it, some of which have flaps for easier operation. Boxwood initially dominated the instrument itself, later ebony became common.

The Encyclopaedia of Diderot and Alembert According there was next to the described flageolet d'oiseau (Bird flageolet) a flageolet gros (Großflageolett), which was made of one piece, had no thickening with a sponge and had a less light and delicate tone .

The heyday of the harmonics lasted from the 17th to the 19th century; the instrument achieved a certain distribution above all in England and France. Originally it was only intended for solo use, so Handel and Purcell composed some pieces for the instrument. In art music , however, the flageolet never played a particularly important role, even if it was occasionally used in orchestras and bands for the upper part. This was usually not explicitly noted in the notes, only in a few cases there are indications that, for example, a drawn part for “flautino” was normally played by a flageolet. In the course of the 19th century this was increasingly replaced by the piccolo in the symphony orchestras .

There is evidence that the harmonica was played privately by Samuel Pepys , Hector Berlioz and Robert Louis Stevenson . It was also used, similar to the serinette, to teach birds to sing. William Hill, for example, published melodies in his "The Bird Fancyer's Delight" of 1717 that should be played over and over again to a house bird so that it can learn them. 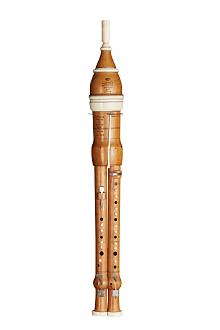 The English instrument maker William Bainbridge patented a double flageolet in 1810 . This type of double flute consists of two English flageolet playing tubes connected to one another and produces a particularly dense sound through beats . One flageolet has seven finger holes and is played with the left hand, the other has four finger holes and is operated with the right hand. However, the two pipes are mounted on a single mouthpiece, so that only both can be played at once if one is not blocked. Since chords were easy to play with the double violet, it became very popular, especially in England. Bainbridge also brought a triple positionolet onto the market around 1825. It basically corresponded to a double flageolet, but behind the two tubes there was a third bass pipe that was played with the thumb. Due to the complex construction, this instrument could not prevail.

Buffet Crampon built a flageolet with 13 finger holes based on Boehm's system .

In addition to the usual flute as a lengthwise flute, transverse fluteolets were also produced in rare cases. Another curiosity are instruments from which the flagolette head (mouthpiece and cutting edge) can be removed and replaced with a conventional flute head. This is possible if the pitch range of the two instruments is the same, i.e. the same finger holes can be used.

In Austria the flageolet has been a folk musical instrument as the "Brucker Alumpfiferl ".