The serpent (also the serpent, from Latin serpens , "snake") is a historical brass instrument . It is the bass instrument of the Zinken family, which is therefore blown with a kettle mouthpiece .

When the organ is a tongue voice Serpent, mostly as 16 ' -voice in the pedal predisposed is.

The approximately two meter long tube of the serpent is made of hardwood (mostly walnut ) and is wound in a snake shape. As with the crooked prong, it is glued together from two halves and covered with black leather or parchment . The bore is more conical than the tine. The Serpent originally had six finger holes, but no thumb hole; in the 19th century, up to eight other holes were added that were operated with flaps. Around the middle of the 19th century, the six finger holes were also replaced by flaps. There were also higher tunings up to the soprano serpent. The kettle mouthpiece was made of ivory or horn on early instruments, later made of metal.

There was a (French) church and later an (English) military design, which was characterized by a more compact design and metal parts. Intonation and the stability of the notes require great skill. 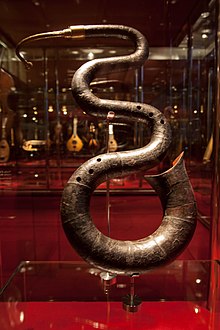 Serpent in the Music Museum in Barcelona

According to tradition, the serpent was invented in 1590 by a canon Guillaume in Auxerre . According to the ideas of the 16th century, the sound of the prongs came particularly close to the human voice, and the use of the serpent as an accompanying instrument for choral music was a last vestige of the tradition that lasted into the 19th century.

For a long time the serpent remained the only bass instrument with sufficient volume for larger ensembles and rooms or for open-air performances. Due to the major changes in the ideal of singing in the 18th century, it no longer seemed to fit the human voice. In the Traité d'instrumentation (1844), Hector Berlioz said that “his cold, hideous howl” was best suited for the dies irae of the funeral mass. Nevertheless, the serpent was still used as the last instrument of the tine family in Catholic church music and in orchestras, especially in French and English military music until the middle of the 19th century.

When orchestral scores of the 19th century (for example in Richard Wagner's Rienzi in 1842 ) the term “serpent” appears as the bass of brass instruments, the more modern bass horn is often referred to . It was later replaced by the ophicleide and the tuba . In folk music the serpent persisted in some places into the 20th century.

The film composer Bernard Herrmann used the serpent for the soundtrack of Journey to the Center of the Earth (1959) , Jerry Goldsmith used it for Torah! Torah! Torah! (1970). At the end of the 20th century, Michel Godard discovered the serpent for jazz . In 2012, Luigi Morleo composed the concert Diversità: NO LIMIT for serpent and string orchestra.

The serpent is also used as a historical bass instrument in the orchestra.