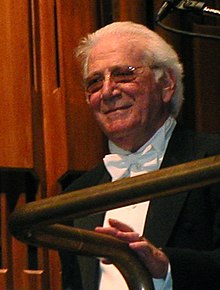 Jerrald "Jerry" King Goldsmith (born February 10, 1929 in Los Angeles , California , † July 21, 2004 in Beverly Hills , Los Angeles) was an American film music composer . Together with composers like John Williams , Bernard Herrmann and Henry Mancini, he is considered one of the defining figures in American film music from the late 1960s to the present day. Goldsmith, whose "artistic potential was primarily [...] stimulated by the film images", was known to many music fans outside of the film industry despite his extensive restriction to film music.

Before Goldsmith gained attention with his first Oscar nomination for the film Freud (1962), he worked from 1950 initially as a typist and later as a composer for live radio and television shows for the US media network CBS .

Until his death from cancer in July 2004, Jerry Goldsmith lived in Beverly Hills ( California ) with his second wife, Carol Heather Goldsmith , who was involved in Jerry Goldsmith's composition for The Omen (1976) as the singer for the song The Piper Dreams . His son Joel Goldsmith (from his first marriage to the singer Sharon Hennigan ) was also active as a film music composer (including Stargate SG-1 and Moon 44 ). Goldsmith leaves five children, six grandchildren and one great-grandson.

Since 1987 Jerry Goldsmith has conducted concerts in which he played suites of his greatest film scores with American and English symphony orchestras.

Goldsmith once described that when working out a sound concept for a film, he often looked for emotional pivotal points in the plot, regardless of genre, from which he then design his music, e.g. the fantasy elements in a fantasy film are less important to him when developing a sound concept. Depending on the structure of a film or a scene, Goldsmith chose either a very intimate or a very powerful approach to his setting, with his driving background to action scenes and thus more of his compositional power drawing filmmakers' attention to him. He preferred irregular rhythms, bold changes of time and raw orchestral attacks, but according to his own admission he always made sure to give the action pieces a structure that clearly structured the scene to be accompanied. His pieces on turbulent action scenes in Total Recall or Rambo II are exemplary in their interplay of relatively slow and fast as well as loud and quiet, which is accompanied by an enormous film-dramatic effect. He was also famous for his background music to scenes of tension, which were often provided with very modern avant-garde elements in the film music. This and his ability to produce sweeping action pieces made him an often committed film composer, especially in the thriller and horror sector. But despite his laurels, which are often earned within these genres, he also convinced the filmmakers with his ability to create catchy melodic-lyrical ideas. Among other things, he created the theme songs for the television series Star Trek - The Next Generation (an adaptation of the main theme of Star Trek - The Film ) and The Waltons, as well as the current fanfare from the Universal film studio .

With Goldsmith's particularly wide range, it could well happen that lyrical passages, harsh modernist music and action pieces with sophisticated rhythms alternated in a single film music or sometimes even in a single piece. A deliberate, particularly biting contrast was created in the horror films Das Omen and Poltergeist, for example, when Goldsmith juxtaposed a melodically particularly memorable sweetish main theme with extremely rough tension passages, but was able to incorporate both elements into an accomplished sound construct. It is precisely the transitional passages and the links between these elements within a piece or a film score to form a musically coherent whole that strengthened Goldsmith's reputation as a progressive force in film music of the 60s and 70s who composed well above the average. With his film music for Das Omen (1977), for example, he introduced a much more modern use of the choir, which was closely related to Stravinsky, and explored the possibilities of completely atonal film music in Planet of the Apes . Goldsmith is also known for the use of exotic, rarely used or in the context of the film unusual instruments with which he refined many of his film scores. In the film Magic, for example, he succeeded in using a harmonica to reflect in the music the burgeoning madness of the main character, who is slipping more and more into schizophrenia with the help of a ventriloquist dummy.

In 1993 Goldsmith initiated the first concert performance of Alex North's original composition for the Stanley Kubrick classic 2001: A Space Odyssey . In the final version of the film, director Kubrick had preferred the so-called temporary tracks (pieces of music that were used as placeholders - especially useful for editing the film - until the composition was completed) over the largely composed North music. In the final cut, classical pieces of music by Richard Strauss , Aram Chatschaturjan , György Ligeti and Johann Strauss could be heard, but no notes from the music specially composed for the film by North. 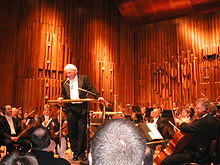 With the recording and publication of the original music, Goldsmith sparked a debate about the use of existing music in films and placed himself at the forefront of opponents of Kubrick's way of working. In his opinion, films would benefit from the success of existing works, but would not integrate them sensibly. On the occasion of the first performance of the original composition, which he conducted himself, he remarked:

“It doesn't pay to squeeze music into a movie, and 2001 was ruined by Kubrick's music choices, in my opinion . She was left unrelated to the film, and the pieces couldn't draw the film because they weren't part of it. "

Goldsmith received an Oscar in 1977 for his composition on The Omen and 17 other Oscar nominations:

His film scores for Planet of the Apes and Chinatown reached positions 18 and 9 on the American Film Institute 's list of the 25 greatest film scores in 100 years. Jerry Goldsmith, along with Bernard Herrmann , Elmer Bernstein and Max Steiner, is one of those composers who are featured twice on the list. Only John Williams made three entries.

Goldsmith was also nominated for nine Golden Globes ( Seven Days in May , Gunboat on the Yangtze River , Chinatown , Star Trek: The Movie and Alien , Under Fire , Basic Instinct , LA Confidential, and Mulan ), four BAFTAs, and several Grammys . He received Emmy Awards for his TV works QB VII , Babe , Masada and Star Trek: Raumschiff Voyager , and an Emmy Award nomination for The Red Pony . He also won the BMI Film & TV Awards 12 times . The Film Music Society honored him in 1993 for lifetime achievement, the Palm Springs International Film Festival for achievement in the field of film music in 1998, and the Hollywood Film Festival in 1999.