This article explains the educational institution and castle Fürsteneck in Hesse; for other meanings of 'Fürsteneck' see Fürsteneck (disambiguation) .

Fürsteneck Castle from the south 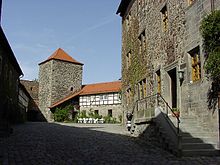 North side in winter 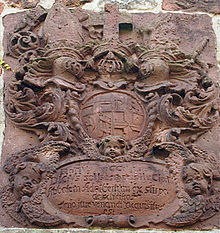 Pointed arch in the wall of the festival hall

Foundation stone as an educational institution

The castle Fürsteneck is in the area of the market town of Eiterfeld in the Hessen district of Fulda .

The castle was founded as a border fortification of the Fulda monastery and has been the property of the state of Hesse since secularization . Since 1952 it has been a Hessian folk high school and academy for professional and musical-cultural further education.

Fürsteneck and the surrounding villages are given to the Fulda monastery in 845 in exchange for three villages from Württemberg by Ludwig the German . Until the secularization in 1802, the castle remained almost continuously in the possession of the Fulda monastery.

Abbot Heinrich V. Graf von Weilnau accepts Berthold von Buchenau as Burgmann in 1290. Towards the end of the 13th century, the castle was built, presumably under Prince Abbot Heinrich V von Weilnau, as a border fortification for the Fulda Monastery (first mentioned in 1309). Due to incessant financial worries, the Fürsteneck office was ceded to different masters until the 16th century, including:

The Fulda monastery bought the castle back in 1532. From then on, only the responsible officials sit on Fürsteneck.

During the Thirty Years War , the castle was partially destroyed to the ground. The surrounding villages are partly deserted. Three male residents are still registered in Eiterfeld. Abbot Adalbert von Schleifras acquires Fürsteneck Castle in 1708 and rebuilds it. The coat of arms of the Prince Abbot von Schleifras testify to the reconstruction. The curtain wall with the castle gate comes from earlier times.

With the secularization in 1802, Fürsteneck lost its official function as "office" to Eiterfeld, which from now on administered itself. Fürsteneck is leased as a state domain in 1818. The castle is now called: "Fürstenecker Herrschaftliche Meyerei" and becomes an agricultural property, the fields and meadows of which are leased to the subjects for an annual fee of 1210 guilders.

From 1925 until the end of the Second World War , the domain tenant and later district farmer leader Salzmann ran the estate on the castle and turned it into a control center for Nazi activities and attacks in the Hünfeld district . Together with others, he erects a gallows on the market square in Eiterfeld, on which a sign is placed with the request to hang three Jewish citizens of Eiterfeld.

Between 1952 and 1953, the run-down castle was converted into a folk high school through the initiative of Ministerialratin Johanna Spangenberg, Professor Hermann Schektiven and the later first headmaster Gustav Huhn . Otto Bartning, who is close to the Bauhaus, is won as the architect . Since 2003 all parts of the building have been renovated with the support of the State of Hesse.

The castle was first mentioned in a document in 1290. But there are indications that she is a lot older:

Another indication of the old age of the castle complex could be that only castles from the time before the Crusades have towers that are flush with the outer wall , instead of towers protruding from the wall: the north tower is in line with the two outer walls . The same applies to the old keep to the right of the entrance gate.

The current outer gate (3) was subsequently widened at a time when the castle had long since ceased to serve as a fortified castle .

The actual passage should have been a fairly narrow gate, which in case of doubt was easy to defend.

The same applies to the actual castle gate (4). The original gate should have been much lower and narrower. The loopholes in the kennel (5) on the left are so deep that you can assume you are standing on a layer of rubble.

On top of the wall is an old battlement (6) that originally went over the lower outer gate. On the west side of the battlements there is a round corner (7) with the small coat of arms of the Fulda prince abbot Johann Bernhard Schenk zu Schweinsberg .

Above the castle gate is a wall with bricked-up windows, presumably for living rooms, which indicate how often and extensively the castle has been rebuilt over the centuries.

Different colored stones are built into the castle walls: dark basalt rubble and lighter sandstone blocks. The wounds of the old walls can be clearly seen on the basis of the lighter "repairs" and give an impression of the renovation work that Adalbert von Schleifras had carried out in the 18th century.

Adalbert von Schleifras has put his coat of arms above the door frame of the manor house (9) :

(In the year in which this house, called Soisberg, was renovated,
it was by Abbot Adalbert from the von Schleifras family


with all rights acquired through purchase.)

The chronogram shows the year 1710 in the second and third lines; the Y is calculated as a double I.

The house into which the door leads is the old residential building, the Palas . A spiral staircase leads up between the keep and the hall and connects both.

In front of the farm building (10) there is another coat of arms of Adalbert von Schleifras'. Originally there were probably no buildings here, only walls and battlements. However, an extension must have taken place at an early time, because you can bricked on the outside wall of economic tract loopholes discovered.

In the 19th century, when Fürsteneck was an agricultural property, the forge and the pigsty were located here.

The north tower (11) follows. In the 19th century it was half disintegrated and without a roof. At the time when it was still used as a defensive structure, it hadn't fallen apart, but it was also without a roof, but with many loopholes. The outside staircase to the tower was also built quite late, as was the entrance door to the tower, while the window above the door should be older.

The north gate (12) is probably more recent and will have been built at the time when the domain owners or workers had to go to their northern fields with carts and horses.

A third coat of arms of Schleifras can be found above the entrance to the conference building (13) with the hall, a former barn, as well as other seminar rooms and rooms for the participants:

(Adalbert, by the grace of God Abbot of Fulda, Prince of the Holy Roman Empire,


the exalted Empress Arch Chancellor, Primate in Germania and Gaul 1709)

A few steps further to the left of the entrance to the conference building is the former, now walled-up entrance to the hall in the form of a pointed arched door vault (14).

Fürsteneck Castle is today an independent educational institution with a supra-regional, non-partisan and non-denominational orientation. The fundamental conversion to an educational facility was carried out in 1952/53 by the architect Otto Bartning .

The program includes events as part of educational leave , courses on key professional qualifications such as communication , creativity or management as well as professional or cultural training courses . The main focus is on musical and cultural education with offers on dance , music (folk, drone and early music, rock, pop, jazz), theater, rhythm, ceramics, painting, drawing, film and photography. There are also courses on nature and ecology, leisure and health, on questions of lifestyle and orientation and weeks for families. Special training courses for social, educational, nursing and psychological professions complete the overall offer.

The Hessian Student Academy has also been located in the castle since 2004 .

The educational establishment is supported by the non-profit association Hessische Heimvolkshochschule Burg Fürsteneck e. V. The association was founded in 1952 as a round table of different social groups.

Castles and palaces in Hesse in the Fulda district

Waiting towers in the district of Fulda