Rhadamantus is a redirect to this article. For the waltz see Rhadamantus-Klänge . See also: rhadamanthus . 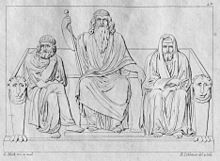 The judges of the dead Minos, Aiakos and Rhadamanthys
( Ludwig Mack : Die Unterwelt , around 1826)

Rhadamanthys ( Greek  Ῥαδάμανθυς ), Cretan ruler and later judge in the underworld , is a figure in Greek mythology . He was also venerated in the Aegean Islands and Boiotia .

According to legends that may date from Minoan times , he was a powerful king. During his lifetime, he brought Crete law and order, and after his death he was in Tartarus continue as a just ruler and a judge. He was initially considered a descendant (great-grandson) of Kres . Later genealogies classified him next to Minos and Sarpedon as the son of Zeus and Europa ; Instead of Sarpedon, Aiakos is also mentioned as the brother of Rhadamanthys and the third judge of the dead.

From the integration of the older saga, however, there were chronological difficulties, since Sarpedon took part in the Trojan War , but when Zeussohn was born two generations earlier. So some ancient historians managed to provide the brothers with descendants of the same name. These "later born" Minos, Sarpedon and Rhadamanthys are said to have been sons of Lykastus and Ide .

After Amphitryon's death , Rhadamanthys married Alkmene and settled in Okalea . According to tradition, Erythros and Gortys are considered his sons. Rhadamanthys is also said to have raised Heracles and taught archery.

According to Homer brought Phaiakians Rhadamanthys once with one of its ships from Scheria to Euboea .

The asteroid (38083) Rhadamanthus in the Kuiper belt was named after Rhadamanthys .