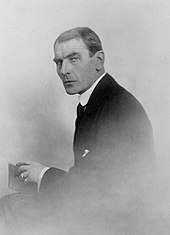 After finishing school in Brno, Richard Schaukal studied law in Vienna and then entered the civil service. In 1898 he received his doctorate as Dr. jur. and in 1899 was transferred to the district administration in Mährisch Weißkirchen . Also in 1899 he married Fanny Hückel, the daughter of a hat manufacturer, with whom he had three children. His career as a civil servant was extremely successful; In 1903 he was appointed to the ministerial presidium in Vienna, in 1908 to ministerial secretary, in 1909 to section councilor and in 1911 to ministerial councilor, in 1918 he was ennobled by Emperor Karl . In the same year he left the civil service to work exclusively as a freelance poet, critic and translator from then on. Schaukal died in Vienna in 1942, where he was last with his family at Cobenzlgasse 42 in Döbling , XIX. Viennese district lived.

From Vienna, Schaukal maintained close contacts with leading representatives of the literary scene, for example, he was in lively correspondence with the poets Arthur Schnitzler , Thomas and Heinrich Mann , Rainer Maria Rilke , Hermann Hesse , Karl Kraus , Arno Holz , Max Brod , Ferdinand von Saar , Bertha von Suttner , Marie von Ebner-Eschenbach and Dora Hohlfeld . He was also on friendly terms with painters and illustrators such as Heinrich Vogeler , who illustrated his volume of poems Pierrot and Colombine (1902), and Alfred Kubin .

Schaukal's essence as well as his writing was not closed and unified, one can often refute him with his own statements. If one compares the strict style-critical remarks that place him in the context of the ornament criticism by Karl Kraus or the architect Adolf Loos with his impressionistically colored literary works, which in addition to the early poems also included the novella Mimi Lynx (1904) blatant contradiction clear, which distinguishes Schaukal's character and his work as a whole. In his multifaceted activities as a writer, translator, reviewer and cultural critic, he was equally conservative and progressive. Since he sensibly registered and productively implemented the various influences of his time, he represented a seismographic figure not only at the turn of the century in Vienna, but also in European culture around 1900. The historian Gordon A. Craig sees the apolitical predominant in him, like his German contemporaries.

Schaukal's oeuvre , which focuses on poetry and novels, comprises over 75 works; the early poems were based on the French poetry of symbolism , which he also preferred to translate, and are characterized by sultry, youthful passion and elitist demarcation from the masses, especially the volume of poetry Meine Gardens. Lonely Verses (1897). Furthermore, Schaukal's writing revolved around the typical poles of love and death, which was evident in his poems as well as in the volume of short stories Eros Thanatos (1906). Illustrations by Joseph Beuys exist for some of the stories from the prose volume Von Tod zu Tod (1902) .

Schaukal's most well-known prose text Life and Opinions of Mr. Andreas von Balthesser (1907) describes the life of a dandy in glosses, dialogues, letters and sharp-tongued aphorisms. Andreas von Balthesser, "the most splendid dandy of Austrian poetry", as Peter Härtling called him, represents a decadently over-refined lifestyle, is superior, casual, elitist and hates society, which he nevertheless does not want to miss. The focus of interest is his external appearance, which he stages with great effort. Nevertheless, the dandy also pays attention to his behavior, his manners and his language; dandyism is an ideology.

Schaukal shared the enthusiasm for the First World War with many intellectuals , which was reflected in his Iron Sonnets (1915). Similar to Hugo von Hofmannsthal , Alexander Lernet-Holenia or Anton Wildgans , he could not come to terms with the fall of the Danube monarchy and, as a staunch Austrian and monarchist, wrote contemplative texts with a Catholic-philosophical character as well as biographical stories. He was buried at the Grinzing cemetery .

In 1973 the Schaukalgasse in Vienna- Hernals (17th district) was named after him.

In September 1996, the Richard von Schaukal Society was founded at the University of Kassel . Her main journalistic activity is the publication of the yearbook Eros Thanatos . It contains literary essays and topicalities on research into Schaukal's work and the literature of Viennese modernism. In addition, they organize readings, exhibitions and collect philological material on Schaukal's life, environment and reception.

Literature on Richard von Schaukal since 1974