This article describes the novel by Heinrich Mann. For the film, see Der Untertan (film) . 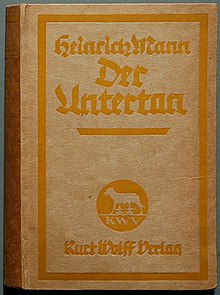 Der Untertan is a novel by Heinrich Mann from 1914. The first book edition was published in 1918 by Kurt Wolff Verlag . With ironic distance, Heinrich Mann tells the life story of the fictional opportunist Diederich Heßling from his childhood to his position in the Wilhelmine society of the German Empire at the turn of the 19th and 20th centuries.

The novel tells of Diederich Heßling as an example of a certain type of person in the society of the German Empire . Hessling is obedient to the authorities, cowardly and without moral courage . He is a follower and conformist . Heinrich Mann tells Hessling's life story with an ironic distance from his childhood up to securing his position in the Wilhelmine society. He is portrayed as an insecure young man, student, member of a striking student union , regulars' table agitator , factory owner, opponent of the proletariat , ruler of the family, local political intriguer and admirer of the German Emperor Wilhelm II. On a chain of such episodes, which use quotes from imperial speeches as a guide , Heßling's rise to influence and power is portrayed, with his personality acting out on the one hand as a tyrant against the weaker, on the other hand as a subject who happily subordinates himself to higher political powers.

Heßling identifies with the world power ambitions of the radical nationalists who wish for the coming world war. During a speech at the inauguration of an imperial monument , in which Hessling describes himself as a citizen of the time, order is dissolved by an apocalyptic thunderstorm. As a critical contrast to Hessling, Heinrich Mann lets the father of a friend, the 1848 revolutionary Buck, die in the face of Hessling as a portrayal of stunted liberalism .

The subject satirizes the Wilhelmine epoch and analyzes the situation at that time. Heinrich Mann diagnosed the nationalist politics as well as the balance of power of his epoch under the government of Wilhelm II. In this connection Mann had old Buck say:

"When the catastrophe that they think they are avoiding is over, be assured that humanity will not call what followed the first revolution more shameless and unreasonable than the conditions that were ours."

With this, Mann anticipated the World War that soon followed and compared the Wilhelmine era with that of the Vormärz .

The manuscript was completed a month before the start of World War I in 1914. Already at the end of 1911 an excerpt was printed in Simplicissimus under the title Lebensfrühling , followed in the spring of 1912 by another under the title Neuteutonen . The novel was published from January 1914 until shortly after the outbreak of war as a preprint in sequels in the magazine Zeit im Bild and as a book edition only in 1918 by Kurt Wolff (cover design: Emil Preetorius ) in Leipzig; after its publication there was a lot of controversy .

Heinrich Mann described very clearly the attitudes out of which Germany was driven into nationalism and ultimately into the fateful First World War.

While Thomas Mann accused his brother of “nefarious aestheticism ”, Kurt Tucholsky praised the book as the “Herbarium of the German man”. The debate about the representativeness of the subject as a symbol of the Wilhelminian Empire was given a boost in the 1980s when Hans-Ulrich Wehler (supported by Ossip K. Flechtheim ) formulated the thesis that “no historian [the role of the opinion-forming academic bourgeoisie in dissemination such a radical, anti-democratic nationalism in the German Empire] was able to describe so vividly ”as Heinrich Mann, while Eberhard Straub described it as a caricature“ who did not understand the citizen and the legal, cultural and welfare state of his present ”. The idea that Diederich Hahn , a member of the Reichstag, could have been the godfather of Diederich Heßling, turned out to be unfounded. Neither do the poet's notebooks on his subject manuscripts stored in the Berlin Heinrich Mann Archives contain anything about this. The literary scholar Ariane Martin, University of Mainz, assumes that the author might have meant, etymologically, “Theoderich”, the strong, typically German man, the “ugly” German.

The subject was included in the ZEIT library of 100 books and also in the ZEIT student library .

The painter Karl Hubbuch created a lithograph of the same name in 1923.

In 1951, Wolfgang Staudte successfully filmed the novel with Werner Peters in the leading role. The director and leading actor received the GDR national prize for this . Staudte's film initially fell victim to censorship in the Federal Republic of Germany : It was assessed as an attack on the Federal Republic and therefore banned, was only allowed to be shown in closed events and was only released in a greatly abridged version in 1957. It was not until twenty years later that West German television showed the film in full.

Autobiographical and Posthumous
An Age is Visited  | Welcome to the world