Michael Mann was the youngest child of Katia and the writer Thomas Mann . The family called him "Bibi". He grew up in Munich and attended the Wilhelmsgymnasium there , but later switched to the Schloss Neubeuen boarding school due to school difficulties . He was very interested in music and received violin lessons as a child. From 1933 he lived with his family in Switzerland and attended the free grammar school here. But music was much more important to him, and he began studying at the Conservatory and the Music Academy. Here he was rated “decidedly gifted”. In order to further develop his talent, he and his sister Elisabeth took private lessons from the world-famous Czech pianist Rudolf Serkin (1903–1991). He received his first teaching diploma in Zurich, but an incident led to the termination of his training and his relegation. He is said to have slapped the director of the conservatory after he pettyly forbade him to play the piano during the breaks.

Michael Mann married Gret Moser (1916–2007) from Switzerland on March 6, 1939 in New York, a former classmate of his sister Elisabeth. With her he had two sons, Fridolin , called Frido, and Anthony, called Toni, and the adopted daughter Raju . Both spouses fled to London at the beginning of World War II; from exile in the USA, Katia Mann urged her son to move to his parents in the USA. After initial hesitation because of the difficult relationship with his father and when Hitler's troops attacked England, they both decided to emigrate to the USA . But the physical distance remained because they settled in Monterey near Carmel, a small coastal town south of San Francisco. During this time Michael Mann continued his violin studies , he took lessons from Henri Temianka (1906-1992). This then convinced him to switch to the viola, he followed and became a violist. Between 1942 and 1947 he was a violinist with the San Francisco Symphony and was accepted into the city's Conservatory of Music. Michael Mann also intensified his studies in music theory, gave lectures and published in this field. With this subject he also received recognition from his father, who consulted him on the music-theoretical passages of the novel in the creation of the novel Doctor Faustus . From 1949 Michael Mann made appearances as a solo violist in the USA and Europe. In 1951 he went on a concert tour with the pianist Yaltah Menuhin (1921-2001), a sister of Yehudi Menuhin ; However, this had to be broken off when a suspected affair between the two became public, as a result of which his marriage and the music career that had begun threatened to fail. Michael Mann was the only member of the family to attend the funeral of his brother Klaus in Cannes in 1949 , who had been divorced by his own hands.

As a solo musician, Michael Mann went on a world tour in 1953 that took him to Japan and India . After returning to Europe, his father Thomas Mann died on August 12, 1955 in Zurich. Quite unexpectedly, Michael Mann decided in 1957 to give up his music career. The exact reason for this is not known, according to Katia Mann's memory he had grown tired of his job: "[...] always playing people things they didn't really want to hear, plus: giving concerts and the whole business around it [...] ] “He left Pittsburgh and began studying German in 1958 at Harvard University, Massachusetts . With studies on Heinrich Heine's music criticism, he received his doctorate in 1961 and in the same year moved to the German Department of the University of California in Berkeley . Here he was professor of German literature from 1964 to 1977. During this time he mainly dealt with the "rebels" in German literature; Friedrich Schiller , Heinrich Heine , Friedrich Daniel Schubart . His father also became an important subject of research. In 1965 he published “The Thomas Mann Book. An inner biography in self-testimonies ”, and in 1968 he was awarded the Schubart literature prize. When his father's diaries had been released according to the will in 1975, he agreed to edit them. However, the study of the diaries plunged him into a crisis, as colleagues around him noticed. "These diaries of his father drove him crazy ..." 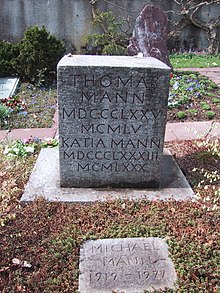 Michael Mann died on New Year's Eve 1977 from ingesting a lethal mixture of alcohol and barbiturates . It is suspected that it was a suicide and that the trigger was preoccupation with his father's diaries, which he had made accessible. The entry of September 28, 1918, for example, indicated that he had been an unwanted child and should be aborted on medical advice in consideration of Katia Mann's health. Michael's son Frido reports in his biography Achterbahn of a visit to his mother after the death of his father, that there was an argument between the parents in the afternoon, so that a New Year's Eve invitation was canceled and Michael Mann went to bed early. At 10 p.m. he went into the room of the adopted daughter Raju and talked to her tenderly. Then he returned to his room. Frido Mann sums up: “It is assumed that he then took the same high dose of medication for the second time as a few hours earlier.” Michael Mann had prepared a two-volume selection edition of the diaries, the manuscript was completed at the end of 1976, but it was in this form never published. His siblings decided to keep their son's death a secret from the elderly mother. He was buried in the family grave in Kilchberg near Zurich.

After the death of Michael Mann, Peter de Mendelsohn (1908–1982) and Inge Jens (born 1927) took over the further editorial work on Thomas Mann's diaries. Inge Jens published Thomas Mann - Diaries in 1995 and Peter de Mendelsohn 1875–1918 as well as Years of Floating . An autobiography that Michael Mann had worked on appeared posthumously in 1983 entitled Fragments of a Life .

Members of the Mann family