The moor frog ( Rana arvalis ) belongs to the family of real frogs and also to the genus of real frogs . In addition, it is grouped according to appearance and way of life with other species (compare: common frog , agile frog ) to the so-called brown frogs .

It is a rather slender, dainty brown frog with a pointed snout. The pupils are horizontal, the eardrum is clearly visible within the temporal spot, but quite small (about 2/3 the diameter of the eye) and far away from the eye. In contrast to the common frog, which sometimes looks similar, the heel hump is arched high and firm.

The head-to-trunk length of the males and females ranges from 5 to 6, exceptionally up to 8 centimeters. The top is light to dark brown, but there are also reddish brown colored and strongly black spotted animals. The typical brown frog temple spot behind the eye is dark brown. A wide, light longitudinal band often runs across the middle of the back and is lined with dark; but this can also be missing. The glandular ridges on the back are often white-edged and clearly defined. The flanks are partly conspicuously marbled in black. The moor frog therefore appears to be comparatively vividly drawn; the range of variation is very large. Sometimes a certain distinction from other brown frog species is only possible through a combination of several characteristics. The ventral side is whitish and mostly unspotted.

Blue coloring of the males 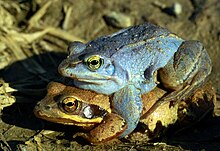 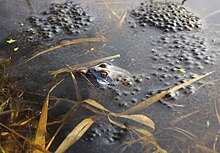 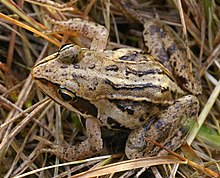 During the peak of the mating season, the skin of the males can appear bluish-violet to intensely sky-blue due to spectral reflections - either only on some parts of the body such as around the eardrum and on the flanks or on the entire upper surface including the extremities. This means that the moor frog has a seasonal sexual dimorphism in terms of color that is otherwise rarely observed in European frogs. Which factors cause this change in color and its intensity has not been clarified in detail. Environmental conditions such as the region, the individual biotope, the weather, the seasonal progress (time of year) or the population density within the spawning community seem to play a role. When they migrate to the spawning waters, the animals are usually still brown in color. Only with increasing courtship activities in the water can a gradually increasing blue discoloration be recognized in the males, which usually only lasts a few days individually. The function of the color change is also not clearly known. It could be a visual signal to the females or to competing males.

The mating call of the males is a quiet chuckle like "uog ... uog ... uog ..." - similar to the bubbling of escaping air from an empty bottle submerged under water. Usually the animals gather in certain places in the shallow water and form common call choirs and spawning societies. In Central Europe, the main calling and spawning time is usually in the third decade of March or the first decade of April, and later in April if the winter is very long. The calls can be heard both during the day (especially when the sun is shining) and at night.

The spawning balls with around 500 to 2000 eggs each are similar to those of the common frog, but are on average smaller in terms of egg diameter, gelatinous layer thickness and lump size. The eggs are colored dark to gray-brown on the top, and on the underside they have a larger, not sharply delimited light pole spot. The egg diameter is 1.5 to two millimeters. Each female produces only one spawning ball per season; the number of eggs in it depends on the age and physical condition of the female. Even for experts, spawning cannot be reliably distinguished from other species of brown frogs in every case.

The oar tail of the older tadpoles is about one and a half times as long as the trunk and ends with a point. Their total length is a maximum of 45 millimeters. After about three months of development, the metamorphosis to land animals takes place .

Distribution map according to IUCN data

Colonized the moor frog preferred habitats with high groundwater level or periodic flooding dynamics, especially fens , swamp forests , swampy extensive grassland , wet meadows and softwood of the larger rivers, high and intermediate Moore . This is also where its spawning waters are located, which are characterized by exposure to the sun and, in some cases, weeds with sedges , rushes and cotton grass beds or turf . For wintering, among other things, woody habitats are visited.

The distribution of the nominate form Rana arvalis arvalis extends from western Central Europe ( Netherlands , Germany ) via Poland , the Baltic States and the European part of Russia to Siberia (approximately to Lake Baikal ). Northern parts of Scandinavia , Karelia and the Kola Peninsula are also settled. In addition, another subspecies is differentiated that occurs in southern Poland, Slovakia , southeastern Austria (both forms are represented in this country), in Hungary , Slovenia , northern Serbia , Romania , Moldova and the Ukraine : the Balkan moor frog ( Rana arvalis wolterstorffi ). The justification of this subspecies status has recently been questioned.

Within Germany, the main areas of distribution of the moor frog are in the northern and eastern parts, especially in the northeast German lowlands. It is only very poorly represented in central, western and southern Germany; in these regions the species is often endangered or even threatened with extinction.

The bog frog, which is dependent on permanently wet biotopes, suffers particularly from the large-scale drainage and cultivation of bogs and other wetlands . In naturally weakly buffered spawning waters within bogs, “ acid rain ” can lead to a drop in the pH value below a critical range (approx. <4.5), fungus growth and the death of the spawn. Intensive agriculture and road traffic result in an islanding of the populations.