The agile frog ( Rana dalmatina ) is within the order of Anura to the family of Real frogs and also for species of genuine frogs . 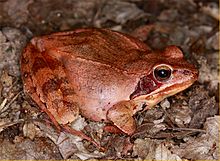 Agile frogs are slender, long-limbed frogs with a pointed snout. The head-torso length of the males rarely extends over 6.5 centimeters, that of the females up to 9 centimeters. The top is light brown, red-brown or light gray-brown ("fall foliage") and comparatively low in drawing and contrast. The triangular temple patches with the eardrum typical of brown frogs are dark brown. The underside is whitish and mostly completely unspotted. During the mating season, the males in the water are often dark brown in color. Dark transverse ligaments can be seen on the upper and lower legs, but they are not the only characteristic characteristic of the species. The hind legs are noticeably long, which is why the animals are very agile: they can make leaps one to two meters wide. The pupils are horizontal; the iris is lighter gold in the upper third (above the pupil) than on the side and below the pupil. The eardrum is about the size of the diameter of the eye and is located very close behind the eye. The gland ridges on the back are not very pronounced and are interrupted in places.

The males migrate to the spawning water as early as autumn to overwinter there. The females overwinter on land near the water. The mating calls of the males consist of very quiet series of tones that sound like "weighed ... weighed ... weighed" and last up to 12 seconds. Often people even call out under water, so that the observer can only hear the vocalizations at close range. At the peak of the spawning phase, which lasts only a few days, the animals also form courtship choirs on the surface of the water. In Central Europe, the spawning season is often around the first and second decade of March - but it can also be delayed due to the weather. The agile frog is the first frog species to spawn in spring. This is interpreted as "avoiding competition" with other early spawning amphibians.

The spawning balls with 450 to 1800 eggs are preferably attached to branches, roots or plant stems in water depths between five and 40 centimeters. So they seldom sink to the bottom of the water. The spawning clumps are not concentrated, as is often the case with moorland frogs and especially with common frogs , in a certain place in the water, but are distributed more widely. The upper egg pole in the spawn is dark brown to black in color, and there is a small, bright, sharply defined spot on the underside. The diameter of the individual egg without the gelatinous shell is 1.5 to 2.1 millimeters.

In the tadpoles , the fin edge is relatively high, especially in the first third of the tail. The tail is two to 2.5 times as long as the body and ends pointed. The abdominal region is "grainy" and intensely pigmented. The total length reaches up to 60 millimeters, which is slightly larger than the larvae of the common frog.

Distribution area according to IUCN data

The agile frog prefers light and water-rich mixed deciduous forests. The open land in the area will also be populated as long as it is linked to the forest via rows of bushes. Forest pools, ponds, small ponds and moats serve as spawning waters. Fish-free waters with sunny, shallow bank areas are ideal. The species often lives far away from water in rather dry, warm forests ( low and middle forests ). Of the three Central European brown frog species, it is the most heat-loving and the most drought-tolerant.

The distribution area extends from France through southern Germany, the Czech Republic , Austria , Hungary , Italy , through the Balkans to Greece and the Black Sea . In Germany, the distribution pattern is a disjoint patchwork quilt with a focus on central and southern Germany, for example in the Cologne Bay , Saarland , north-western Baden-Württemberg and on the Upper Rhine , in Upper Swabia , in large parts of Bavaria and in central Saxony . To the north, the deposits dissolve more and more into small, isolated islands; such are in the northern Harz foreland , in the Lüneburg Heath , on Rügen and on the Darß .

The heavily isolated distribution in northern Central Europe causes spatial and genetic isolation of individual populations. In addition to the direct destruction of habitats, motor vehicle traffic on the dense road network is an important source of danger: When migrating between the sub-habitats, including from winter quarters to spawning waters, agglomerates are run over alongside other amphibians (compare, for example: common toad , common frog ). In addition, artificial fish stocks in small bodies of water can lead to the extinction of frog populations.