Příbor ( German  Freiberg in Moravia ) is a city in the Czech Republic .

The city is located in northeast Moravia and stretches along the banks of the Lubina River . It is surrounded on three sides by the Beskydy foothills with a view of Štramberk , Hukvaldy and Radhošť castles .

The town came into being during the first phase of colonization in Moravia. Vriburch was mentioned for the first time in 1251 in a confirmation document from Margrave Ottokar for Frank von Hückeswagen to found a church. Since 1294 there was a bailiwick in Vriburch . In the course of time the name changed to Freiberg or Przybor . The city, which came under the diocese of Olomouc in the 14th century , is characterized by the school system. The Piarist high school , which was founded in 1694, made a major contribution to this . The school, run by the parish, already existed in 1541. After the establishment of the teaching institute in 1875, the town became a center of education in north-east Moravia.

In 1881 the city received a train station on the newly opened Studénka – Štramberk railway .

After the Munich Agreement , the place was added to the German Reich and until 1945 belonged to the district of Neu Titschein , administrative district of Troppau , in the Reichsgau Sudetenland . 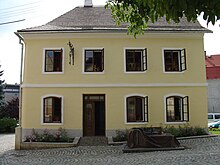 The historic city center was declared an urban monument reserve in 1989 .