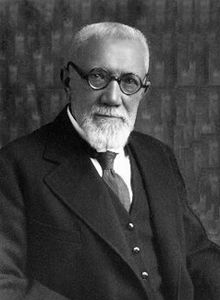 Berthold Bretholz (also Bertold Bretholz ; born July 9, 1862 in Freiberg , Moravia , † November 27, 1936 in Brno ) was a historian and archivist and long-time director of the State Archives in Brno.

After studying history and law at the University of Vienna , Bretholz worked for two years at the Institute for Austrian Historical Research and then for five years at the Monumenta Germaniae Historica in Berlin. In 1892 he was appointed regional historian for Moravia. From 1895 he headed the Brno City Archives and from 1897 the Moravian Provincial Archives, of which he was director from 1909 until his retirement in 1926. In 1905 he became a member of the Commission for Modern History of Austria, in 1906 honorary professor and later associate professor for history and historical auxiliary sciences at the German Technical University in Brno . From 1907 he was a full member of the Austrian Archives Council. The Austrian Academy of Sciences elected him in 1914 as a corresponding member.

The journalist Wolfgang Bretholz (1904–1969) was a son of Berthold Bretholz.