The small town of Gronau (Leine) is located in the Hildesheim district in Lower Saxony and is the administrative seat of the Leinebergland an der Leine municipality . Gronau is a member of the Leinebergland region , a voluntary association of various cities and municipalities in southern Lower Saxony founded according to the Leader approach . On November 1, 2016, some surrounding communities were incorporated into the city. As a result, the number of inhabitants has doubled to around 10,900 and the area has more than quadrupled to around 90 km².

A section of the B 3 passes west of Gronau .

The following districts belong to the city of Gronau: 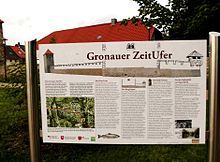 The city was systematically founded around 1298 by Bishop Siegfried II of Hildesheim on a Leinewerder as Gronowe as a south-western fortification of the Hildesheim Monastery . The name Gronowe goes back to the green floodplains on the two arms of the river Leine, which supplied the city with water. At the same time, this situation offered a certain protection for the population. The former Gronau was made up of the inhabitants of three previously unfortified villages: Lehde, Bekum and Empeda. These villages then fell desolate.

In 1427 Gronau joined the Saxon Tohopesate and thus became a Hanseatic city.

There is evidence of a Jewish community in Gronau since the beginning of the 18th century. The synagogue was built in the first years after the city fire of 1702. The Jewish inhabitants of Gronau formed a joint synagogue community with Banteln belonging to the Hildesheim state rabbinate . From 1828 a Jewish elementary school existed, but in 1890 it was converted into a purely religious school due to the decline in student numbers.

Until 1885, Gronau was the seat of the bailiff in the Gronau department , then the district town in the newly formed Gronau district until it was dissolved and incorporated into the Alfeld district on October 1, 1932.

After centuries of existence as an agricultural town , the town experienced an upswing at the beginning of the 20th century due to industrialization and the connection to the Prussian railway network ( Elze – Bodenburg railway line ), which was noticeable in an increasing population.

During the Second World War , Gronau was hit by twelve incendiary bombs on November 6, 1940, which set a roof structure and a bowling alley on fire. On January 27, 1941, four high-explosive bombs caused minor property damage in Gronau. On June 16, 1941, eight high explosive bombs and 20 incendiary bombs fell north of the city, damaging a residential building and a stable. Many windows were destroyed, one was injured.

At the beginning of the 21st century, Gronau (Leine) is home to many commuters to neighboring towns and cities such as Hildesheim and Hanover .

On March 1, 1974, the community Dötzum was incorporated. 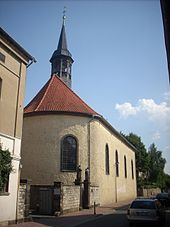 The old town is dominated by the mighty, 65 meter high tower of the Evangelical- Lutheran St. Matthäi Church.

The medieval Lehder St. Johannis Church is located in the Evangelical Cemetery and is used today for funeral services and occasional services.

The New Apostolic Church , consecrated in 1983, is also located near the city park . 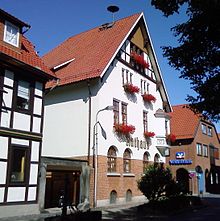 The council of the city of Gronau consists of 5 councilors and 26 councilors from the following parties:

The mayor of the city of Gronau is Ulf Gabriel (SPD). His deputies are Günter Falke (SPD), Eduard Plachta (CDU) and Christine Evers (SPD).

The city was awarded the municipal coat of arms on August 28, 1940 by the President of the Province of Hanover . The district administrator from Alfeld presented it on September 10th of the same year.

The earliest seal dates from the middle of the 14th century and has been handed down as an impression from 1434. It shows a saint next to each other, presumably St. Matthew and Mary with the Christ child, who also holds a staff of lilies in her left hand. Later images from the 17th century only show the Madonna growing above the split shield of Hildesheim Monastery, which is covered with a sloping bar as a place symbol. On a weather vane from 1705, the ladder is documented for the first time, which arose from the earlier sloping beams.

The cityscape is characterized by numerous half-timbered houses in eaves construction, as they are typical for southern Lower Saxony. Since the end of the Second World War and with the immigration of refugees and displaced persons from the formerly German eastern areas, several new building areas have emerged. This development continues to this day.

Municipalities in the Hildesheim district