The Sacks execution site: the courtyard of the arrest block in the Flossenbürg concentration camp 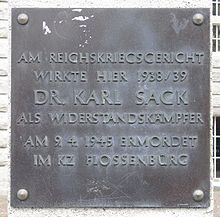 Karl Sack was the second child of a Protestant pastor's family. After attending grammar school , Sack studied law in Heidelberg , where he became a member of the Vineta fraternity in 1914 .

When the First World War broke out , he volunteered for the replacement battalion of the 5th Grand Ducal Hessian Infantry Regiment No. 168 in Offenbach am Main . He was wounded several times at the front and in 1915, after completing an officer training course, was promoted to lieutenant in the reserve . As the war continued, Sack fought on both the Eastern and Western Fronts . Further serious injuries led to his being discharged from military service on September 22, 1918.

Sack then resumed his studies, which had been interrupted by the outbreak of war, and passed his first state examination in 1920 at the State University of Giessen . Immediately after successfully passing his second state examination in October 1922, he married Wilhelmine, née Weber. The marriage resulted in two sons. Professionally, he was initially assistant judge at the district court of Giessen and the district court of Ober-Ingelheim . In February 1926 he moved to the Schlitz district court , where he was appointed chief magistrate two months later. In 1930 he was appointed regional judge at the Mainz regional court .

In 1927 he was a member of the national liberal German People's Party (DVP). After the takeover of the Nazi party , he entered the federal National Socialist German Jurists one (BNSDJ).

After working as a magistrate, Sack switched to the newly established military justice system on October 1, 1934 . There he rose to the position of judge at the Reich Court Martial and was a Reich Court Judge at the Senate for high and state treason matters. In this capacity, Sack was involved in 14 convictions for treason between March 1938 and October 1939, all of which resulted in a death sentence. He was also involved in the proceedings against the head of the Army Command, Werner von Fritsch, who had been accused of homosexuality by the Gestapo, and was able to prove that the allegations made were unfounded.

With the start of the attack on Poland in September 1939, Sack was recalled by the Reich Court Martial at his own request and transferred to Army Group South as legal advisor to Commander-in-Chief Gerd von Rundstedt . In the summer of 1941 he returned to Berlin and became a group leader in the Wehrmacht Legal Department (WR) of the Justice Department of the Wehrmacht High Command (OKW). There he was responsible for observing case law in the Wehrmacht and reviewing judgments.

During the Second World War , Sack came into contact with the resistance groups of the Abwehr and the Wehrmacht . In his function as a judge, he is said to have thwarted the criminal prosecution of various opponents of the regime. The later CSU co-founder Josef Müller (politician, 1898), for example, reports in his memoirs that Sack probably burned the documents for his indictment and attributed the disappearance of the documents to an air raid. A similar description emerges in the case of Captain Hermann Göckeritz, whose proceedings for treason were discontinued in June 1944 after Sack had reported the documents as burned.

The conspirators of July 20, 1944 , whose plans he was privy to, had designated him as Reich Justice Minister if the coup was successful. After the failure of the assassination attempt and the attempted coup, Karl Sack was arrested on September 8, 1944 by the head of the Gestapo, SS group leader Heinrich Müller . He was imprisoned in the Gestapo headquarters on Prinz-Albrecht-Strasse in Berlin.

On February 5, 1945, Sack was transported with others to the Flossenbürg concentration camp. On April 8, 1945, the SS court martial under the chairman Otto Thorbeck and the prosecutor Walter Huppenkothen negotiated . The defendants, alongside Sack Wilhelm Canaris , Dietrich Bonhoeffer , Ludwig Gehre and Hans Oster , were sentenced to death for high treason and war treason and hanged on April 9th . The dead were burned in the crematorium and their ashes scattered.

The chairman of the court martial, Otto Thor Beck, and the prosecutor Walter Huppenkothen were after the end of the Nazi regime in the Federal Republic of Germany for complicity in the murder accused. Thorbeck was acquitted by the Federal Court of Justice in 1956 on charges of complicity in murder, although it was a mere show trial . Even under the laws of the Nazi state, this SS court martial was illegal. According to the War Criminal Procedure Code (KStVO), a court martial was responsible for the defendants , as they were not members of the SS. According to the War Criminal Procedure Code, a stand trial was not possible, as this was only responsible for crimes that had just been committed, the immediate judgment of which was necessary to maintain order and security of the troops. There were also the following procedural errors: no military judges, wrong place of jurisdiction, no defense counsel, no confirmation and review of the judgments.

In 1984 Karl Sack was honored as a resistance fighter by installing a bronze plaque in the former Reich Court Martial in Berlin-Charlottenburg . This honor was highly controversial as he had advocated a broad interpretation of the offense of desertion .

In Bosenheim, a district of Bad Kreuznach , in the Butzbach district of Nieder-Weisel and in Gießen , a street was named in his honor.