This article describes an object of Christian legend, for the novel by Gertrud von le Fort see The handkerchief of Veronica . 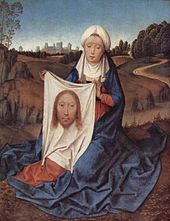 Master of St. Veronica : St. Veronica with the handkerchief of Christ, around 1420. Munich, Alte Pinakothek (probably from St. Severin in Cologne)

Sweatcloth in the treasury of the Vienna Hofburg

The handkerchief of Veronica ( Latin Sudarium Christi ) is an object of Christian tradition. According to this, St. Veronica her handkerchief to Jesus Christ on his way to Golgotha to wipe sweat and blood from his face. The face of Jesus is said to have been miraculously impressed on the handkerchief as a so-called Veronica image.

Origin of the legend

In the Gospels (New Testament) at Mk 5.25 and Mt 9.20 ff there is an account of a blood-ridden woman who had been bleeding for twelve years and who touched Jesus' robe from behind: “Immediately the bleeding stopped and she felt it clearly that she was healed of her suffering. "( Mk 5:29  EU )

In the apocryphal Acta Pilati , which are also called the Gospel of Nicodemus, the blood-ridden woman bears the name Berenike . Its Latin translation, Veronica , was later used in the Western version as a combination of Latin vera . "True" and Greek Εικών ikon . "Image", in "true image", reinterpreted.

Since the cloth was folded, it is said that three identical impressions of the face were made, one of which stayed in Jerusalem , the others came to Rome and Jaen in Spain . But about ten other cities claim to have such prints.

In a late antique Coptic version of the Acta Pilati from the 6th century, the handkerchief healed the seriously ill Emperor Tiberius , as the sight of the face of Christ on the cloth, which Veronica handed to Tiberius, brought about the healing of the leprosy. The Byzantine legend - in connection with the Abgarlegende - tells us that Jesus was still alive to King Abgar of Edessa - today Şanlıurfa had sent a wonderful strong cloth with the image of his face that made these attach to the city gate of Edessa - in Turkey; there the picture was preserved as a brick imprint. More recent versions of this legend report that it was not Abgar but his daughter Berenike who received the cloth. Emperor Constantine VII had the impression brought to his palace chapel in 944; After the conquest of Constantinople - today's İstanbul - by the Crusaders in 1204, his trace was lost.

The tradition according to which Veronica handed her shawl to Jesus on the way to Golgotha ​​has been documented since the 12th century. Also since the 12th century is in Rome a picture of St. Veronica was known with the handkerchief, and in this form the tradition found widespread use in the Middle Ages. In the Way of the Cross this scene is shown as a sixth station.

The handkerchief of Veronica was once one of the most precious and most revered relics of Christianity and is now in a safe in the Veronica Pillar, one of the crossing pillars of St. Peter's Basilica in Rome. The other three pillars of the crossing contained other important relics, which were displayed once a year for worship, the handkerchief in mid-January on the second Sunday after the feast of the Epiphany .

A copy, long revered as the real handkerchief, was given to the Habsburg Emperor Charles VI in 1721 . and is now open to the public in the treasury of the Vienna Hofburg . The Viennese handkerchief is presumably one of five known copies that were made in 1616 of the then Vatican handkerchief.

According to a more recent theory, Veronica's shawl is said to be identical to Manoppello's veil , which is kept in a small church in Manoppello in Abruzzo .

In the Spanish bullfight there is the figure of "Veronica", in which the matador holds his muleta like Veronika holds the handkerchief in iconography.