The village is located in the former East Prussia , about 15 km northwest of the city of Działdowo ( Soldau ) and 57 kilometers southwest of Olsztyn ( Allenstein ). 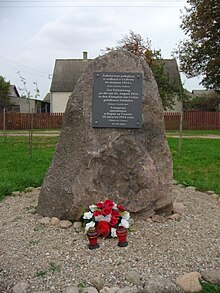 In 1785 Usdau was referred to as a noble village with a mother church and 38 fireplaces (households), which belongs to the Gilgenburg domain district.

On June 22, 1874, Kaiser Wilhelm I granted the district administration of the Neidenburg district the necessary permits for the expansion of the road from Neidenburg via Lissaken and Usdau to the future station in Koschlau on the Marienburg - Mława railway line . The place had a train station on the Samborowo – Turza Wielka railway line , which opened on October 1, 1910. The line between Samborowo and Uzdowo was dismantled after the Second World War in 1945. On the remnant stretch to Turza Wielka , passenger traffic was stopped on May 27, 1962. Probably around 1993 the freight traffic was stopped and the route dismantled.

The place was almost completely destroyed in the course of the Battle of Tannenberg in the Battle of Usdau on August 27, 1914. Reconstruction began in the First World War .

After the First World War, Usdau was ceded to Poland without a referendum in accordance with the provisions of the Versailles Treaty in 1920 .

As a result of the attack on Poland and the subsequent annexation, Usdau was initially assigned to the newly created district of Soldau . From April 24, 1940 Usdau belonged to the Neidenburg district in the Königsberg district of the East Prussia province of the German Empire .

Towards the end of World War II , Usdau was occupied by the Red Army in January 1945 . In the summer of 1945 Usdau was placed under Polish administration by the Soviet occupation forces, along with the southern half of East Prussia and all of West Prussia . As far as German villagers had not fled, they were subsequently expelled .

A church already existed in Usdau in the pre-Reformation period. The parish also included the places Crämersdorf, Meischlitz, Groß-Tauersee and Schönkau. Some of the pastors who worked here from the Reformation to the fourth quarter of the 18th century are known by name.