The monastery Denkendorf was a holy Pelagius consecrated pin of the Order of Canons Regular of the Holy grave in Denkendorf ( Esslingen district ). 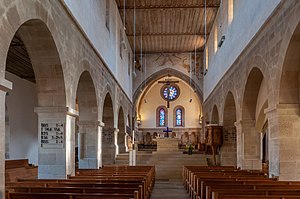 The Denkendorf Monastery goes back to a monastery of the Canons of the Holy Sepulcher. This was donated by a documented Bertholdus after 1128 with the Pelagius Church. On April 22nd, 1142, this donor finally transferred the property to the canons after his death. Around 1130, Pope Honorius II placed the provost under papal protection and assured it the free choice of the provost. King Conrad III. granted the monastery the right to choose its own bailiff in 1139 and placed it under the protection of the king. This protection has been confirmed by other rulers, so in 1181 by Frederick I , 1226 and 1228 by Frederick II. , In 1291 by I. Rudolf and 1299 by Albrecht.

In 1252 Wilhelm of Holland pledged the patronage of Denkendorf to Count Ulrich I of Württemberg . As a result, the Counts of Württemberg tried to make the provost part of their dominion. The monastery resisted and tried to renew its imperial direct privileges repeatedly.

The time of the Canons of the Holy Grave ended in 1535 when Ambrosius Blarer introduced the Reformation on behalf of Duke Ulrich von Württemberg . The (now Protestant) provost's office with its subordinate parishes and worldly goods remained in existence. From 1599 to 1804, the provost of Denkendorf, together with the abbots of Adelberg , Bebenhausen and Maulbronn, was one of the four general superintendents or prelates of the Württemberg regional church. Many of the provosts were court preachers in Stuttgart at the same time and only stayed temporarily in Denkendorf, where a permanent administrator was employed. In 1553 a Protestant monastery school was opened in the buildings of the monastery , which existed until 1584. In 1713 such a monastery school was set up again, which gained great prestige under the Pietist Johann Albrecht Bengel . This second school existed until 1810. Friedrich Hölderlin was a particularly well-known student .

After the school was closed, the monastery was privately owned and served, among other things, as a mustard factory. In 1907 it was bought again by the state of Württemberg and was the seat of a training institute for teachers until 1920. From 1921 to 1934 it housed an adult education center for girls. From 1934 it was a so-called women's school camp and a kindergarten for the NSDAP . After the end of the Second World War , the monastery was a refuge for displaced persons until 1949 , and in 1950 an Evangelical Diakonie seminar was established here. In 1972 it finally became a training center for the Evangelical Church.

From 1207 until it was sold in 1585, the Heilig-Grab-Kloster Speyer was a branch convent of Denkendorf.

"Bengelstüble" in the former office

A small literary memorial in the monastery building, the so-called Bengelstüble, commemorates the former preceptor, the theologian and writer Johann Albrecht Bengel . Editions of Bengels works, portraits and various personal documents are shown. The showcases have been empty since the regional church training center was closed.

The art writer Fritz Alexander Kauffmann was born in the monastery . His father owned the Kauffmann company, which produced the Denkendorf Klostersenf. His educational novel Leonhard - Chronicle of a Childhood (1947) tells of his childhood in Denkendorf Monastery.

In 2015, a Staufer stele was erected on the square in front of the west portal . She reminds u. a. because King Konrad III. and Emperor Friedrich I. Barbarossa took the monastery under their protection in 1139 and 1181 respectively.

In October 2013 it became known that the monastery buildings were to be used for a care facility for the elderly. Despite criticism from the local population and parish regarding the feasibility and profitability of the project, the announcement of a new building was scheduled in November 2014. In February 2015, a jury decided on the architectural proposals; the first prize went to an architecture firm from Stuttgart. "Die Zieglerschen eV" could be won as operator, who as a Diakonie institution already run the senior center "Martin-Luther-Heim" in Denkendorf. Originally, 60 nursing rooms were planned for economic reasons. For urban planning and monument preservation reasons, the space allocation was reduced to 45 rooms. Overall, a budget of 6.5 million euros should be available for the construction project. The financing for the construction of the nursing home is to be handled with loans via a GmbH, which is a 100% subsidiary of the Protestant regional church. In June 2015, citizens of Denkendorf responded to the Synod of the Evangelical Church in Württemberg with criticism and 20 questions, most of which related to the renovation work on the monastery. In September 2015, the Evangelical Regional Church announced that parts of the monastery would be temporarily made available for the accommodation of refugees.