Altshausen is a municipality in the northern district of Ravensburg between the Danube Valley and Lake Constance . The place is known nationally for the Altshausen Castle , the former residence of the Landkomturs of the Ballei Swabia-Alsace-Burgundy of the Teutonic Knight Order and today the residence of Carl Duke of Württemberg .

Altshausen is located in Upper Swabia , about forty kilometers north of Lake Constance. To the north-west of the community is the Obere Donau Nature Park . The Altdorfer Wald ridge is located southeast of the municipality .

West of the center, just off the national road 32 , is the 50  hectare large nature reserve " Altshauser pond ". The area is home to more than 300 vascular plant species , over 60 observed bird species as well as various fish , dragonflies and amphibian species.
Southwest of Altshausen is the 57 hectare “ Dolpenried ” nature reserve , a small raised bog with transitional bog on pitted areas with a blind lake and swinging lawn .

Both protected areas are part of the FFH area “ Wetlands around Altshausen ” and the bird sanctuary “ Blitzenreuter Seenplatte with Altshauser Weiher ”.

The area around Altshausen was already heavily populated in early history. In addition to Celtic burial mounds south of Altshausen, traces of a Roman road and a Roman estate were also discovered in the 19th century.

The name of the settlement is first mentioned in 1004 with Wolfrad von Altshausen , a vassal of Heinrich II . From 1134, his descendants referred to themselves as Counts of Veringen , from which the Counts of Nellenburg later emerged. The place itself was able to receive Reichsdorf-like rights under the subsequent owners until it was mediatized in 1803 . 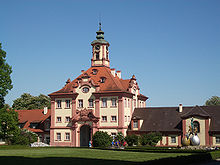 The Altshausen Teutonic Order initially comprised the central town of Altshausen with eight associated hamlets and farms: the hamlets of Ragenreute and Reute, two farms each in Hirschegg, Hangen and Baltshaus , as well as one farm each in houses, Hundsücken and Zwirtenberg. There were four large leasehold farms in Altshausen and the surrounding area: Maierei Altshausen, Lichtenfeld, Tiergarten and Arnetsreute. In addition, the parish villages of Ebersbach with the hamlet of Ried, Hochberg with the hamlet of Luditsweiler, Fleischwangen , Pfrungen , and the villages of Eichstegen , Kreenried with the hamlet of Käfersulgen and Mendelbeuren were also included.

A total of 1683 subjects lived in the rule in 1806. In this area, the Teutonic Order exercised all rights of rule; only at tithing were there any other beneficiaries. There were also twelve feudal estates in the possession of other manors; the village of Mendelbeuren was held by the Teutonic Order of the Diocese of Constance as a Reichenau fief. In contrast, the order also owned its own feudal estates in other dominions. The Lords of Hohenfels, Ellhofen , Arnegg, Achberg and Gut Illerrieden an der Iller belonged to the Kommende Altshausen . In addition, she had a house in Ravensburg , property in Sipplingen and Immenstaad on Lake Constance, and vineyards on Lake Constance in Hinterhausen and Wallhausen. Cattle were kept and a dairy was operated on two of the order's own Alps in the Bregenz Forest , the Rindbergalp and the Hirschgundalp near Sibratsgälle.

In 1806 the Kommende Altshausen fell to Bavaria in the course of secularization and mediatization ; only the village of Pfrungen was occupied by two soldiers from Baden. In the following year, however, King Friedrich I of Württemberg succeeded in negotiating to get the commander in his possession. He took over the castle as private property. In 1810 he acquired the Altshausen dominion by swapping it for the Württemberg dominion in Weiltingen near Dinkelsbühl (which fell to Bavaria), also for his private assets. A court camera office was set up in Altshausen to manage the estates, which existed until 1965 and was then moved to Friedrichshafen .

In Württemberg Altshausen initially belonged to the Saulgau District Office , later to the district of the same name .

After the first hop plants were set up in the 1820s, Altshausen developed into an important growing area for high-quality hops. However, due to competition with cheap hops from abroad, hop growing lost its importance and was discontinued around 1960.

In 1837 a sugar factory was built. The farmers were encouraged to grow beet, which, however, proved to be extremely labor-intensive and not too profitable. At times the sugar factory employed almost 1,000 workers during the season, including many day laborers. When the company went bankrupt in 1854, it was taken over by the Baden sugar factory. In 1892 the factory was finally given up. Later, the Franciscan nuns from Reute used the large factory building under the name "Josefshaus" as a house for the disabled, later as a retirement and nursing home. Today the elderly care facility "Wohnpark St. Josef" of the St. Elisabeth Foundation Bad Waldsee is housed there.

During the time of the kingdom the monarchs came to Altshausen only occasionally, either in transit overnight or to hunt. But when King William II. Of Württemberg in November 1918, abdicated, he left the castle as a residence the presumptive heir Duke Albrecht of Württemberg (1865-1939), who as Field Marshal one of the highest German military leaders in World War I had been. After the king's death, Altshausen Castle and the entire Hofkammergut fell under the line of the House of Württemberg, which had become Catholic in the 19th century.

Duke Albrecht had the castle repaired and in 1927 a crypt was built at the rear of the castle and parish church, where he had the deceased members of his family transferred. This crypt is still a family burial place of the House of Württemberg today. After his death, Philipp Albrecht Duke of Württemberg (1893–1975) succeeded him. Today his son Carl Herzog von Württemberg (* 1936) resides with his family in Altshausen Castle. He has been married to Diane (* 1940), née d'Orléans, who has become known as an artist , since 1960 . Some of her works of art can be seen in the palace gardens. The castle itself is not open to the public.

Altshausen has been part and headquarters of the Altshausen local authority association since 1972 . A year later, the community was assigned to the Ravensburg district .

For the predominantly Catholic population of Altshausen there is a Roman Catholic church with the parish and castle church of St. Michael . The Protestant parish, which has existed since 1855, also has its own church building.

The town's coat of arms of Altshausen from 1930 reminds with a black cross of the rule of the Teutonic Order until 1806; the colors black and gold are reminiscent of the coat of arms of the House of Württemberg, whose main residence has been Altshausen Castle since 1919.

Altshausen is located on the Oberschwäbische Barockstraße and the Schwäbische-Alb-Oberschwaben-Weg , both of which lead past many sights. The place is characterized by avenues. From the castle, Herzog-Albrecht-Allee leads south-east. It was originally 3.5 kilometers long, but was interrupted by the construction of the railway lines. The Hardtweiher is located on the avenue, which was the center of a lake park around 1800.

Coming from the German Order

The main sights are the buildings of the former Altshausen Teutonic Order :

There are four chapels at the former exits:

One of the numerous associations in Altshausen is the Yellow Hussar Citizens Guard on Horseback , which has been reviving the tradition of the Civil Guard of the German Order Coming from 1748–1812 since 1960.

The FV Sportfreunde Altshausen has played in the Danube District League since 1978. After promotion to the first national league in 1987, relegation follows.

The Altshausen music association plays in the middle school and consists of around 55 musicians. He regularly takes part in rating games. The association has existed since 1782 and is therefore one of the oldest associations in the Ravensburg district.

The children's festival with a parade takes place every two years. The local schools and clubs are involved in the move.

The market square festival of the Altshausen music association takes place every year.

Until 2013 the German Nordic Walking Championship in the half marathon took place in Altshausen. 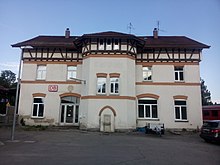 Altshausen station building. On the left, tracks 1 and 2 on the Herbertingen – Isny ​​railway line, on the right track 5 on the route to Pfullendorf with the Oberschwaben Radexpress

The federal road 32 ( Lindenberg im Allgäu - Hechingen ) connects Altshausen with the national road network. The community is with some bus lines u. a. connected with Aulendorf and Ravensburg and belongs to the Bodensee-Oberschwaben Verkehrsverbund ( bodo ).

Altshausen is on the Herbertingen – Isny ​​railway line , from which the Altshausen – Schwackenreute railway branches off in Altshausen , but today it is only in operation as far as Pfullendorf and was temporarily closed in 2004 - after the previous suspension of freight traffic. Since May 2011, the Altshausen – Pfullendorf route has been reactivated for leisure passenger traffic. From May to mid-October, the 3-Löwen-Takt-Radexpress "Oberschwaben" runs on Sundays and public holidays between Aulendorf, Altshausen, Ostrach and Pfullendorf. Scheduled freight traffic on the route with wooden trains began in spring 2017. At the same time, the route will be upgraded for excursion traffic by modernizing the stops, restarting the barrier systems at the level crossings and by the Radexpress Oberschwaben (from 2018).

The Herzog-Philipp-Verbandschule is a primary and secondary school with a technical secondary school . There is also a Progymnasium , a special school and a hearing and speech therapy center with a kindergarten. There are two Roman Catholic kindergartens for the youngest residents.

Other personalities associated with the community

Wikisource: Altshausen in the description of the Saulgau Oberamt from 1829  - sources and full texts